It pays to be a dual citizen

When my parents decided to keep our Polish citizenships as they immigrated to Canada I bet they never thought the Passport would be as valuable as it is today. When they left the country it was a communist waste land with no hope for the future short of a bloody revolution. of course it turns out history was kind to Poland and a peaceful transition to democracy took place. Only 20 years later Poland is now one of the strongest economies in Europe. Not sure exactly why I mention this in so much detail except maybe I feel a bit of pride even if I had little to do with it.

When looking into Visas for various countries it turns out having an EU passport is very valuable. Canadians need Visas to Australia, Japan, Brazil and Paraguay, while EU citizens do not. The majority of African Visas can be obtained on arrival, and even though some of them can be obtained ahead of time, they are only valid for 90 days or so from date of issue, and we won't be in Africa until June.

The Brazilian one is a bit tricky because Kristine still needs to get one even if I don't, but with 90 days validity, we can't really get it ahead of time. I guess it's time to find a way to make Kristine a Polish citizen

well that, or just get the Visa when we're in Uruguay.

Since we're not going to Australia or Japan this time around, in the end amazingly the only Visa we needed to get before leaving is the Indian one. Mission Accomplished! 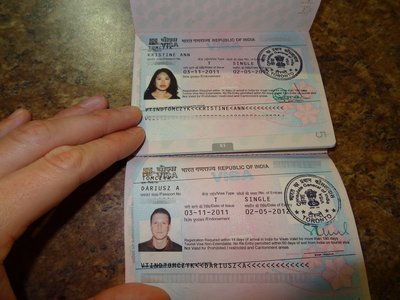