Through some lucky coincidence I logged in one day to the UEFA resale web site and saw that there were 1st class tickets available for the Ukraine opening game in Kiev. The first ever Euro Cup game on Ukraine soil, the first ever game for the Ukrainian national team in a Euro Cup, and the chance to visit one of the most famous cities in the Eastern block. Without thinking too much about it I went ahead and purchased them.

Why not combine this trip to Kiev with seeing the rest of Ukraine I thought? So I started looking at costs for transportation and accommodation and I almost chocked. The costs were getting absolutely ridiculous. Most of the hostels in Kiev were asking for $100 PER PERSON for a bunk bed and the Hotels started at $600 per night. The flights internally between cities were around $300. We're not picky when it comes to accommodation so I never expected to have an issue but now I was starting to get a bit scared we may not even be able to attend the game at all. Luckily I soon found a round trip ticket to Kiev from Warsaw for a reasonable price but unfortunately connecting through Moscow which means backtracking almost a thousand kilometers. The prices meant we couldn’t afford to stay very long so we only booked the minimum 3 night stay (since everyone demanded a 3 night minimum all of a sudden) in a private room in a hostel for $100 a night. We were very lucky to even get this and in fact the room only appeared available at this price about a month or so before the game.

When we got to Ukraine it was quickly obvious that we were not in the 1st world anymore, but it was also obvious that a lot of work went into making it easy for tourists to get into town. There were special buses in service for tourists to get to the subway with English speaking representatives at the airport to help you find and pay for them. There were also English speaking reps at all the subway stations. For those of you that don’t know much about Ukraine this is a major issue for western tourists since Ukrainians use the Cyrillic alphabet and there are next to no signs in English or even in the Latin alphabet that we're used to. However, the rep system worked really well and the people were helpful and friendly so we had absolutely no issues getting into town using public transportation.

The place we booked was actually in an absolutely AMAZING location. If we leaned out of our balcony we could actually see the Olympic stadium two blocks and a 5 minute walk away. The area is a super swanky area in Kiev near the Chervonoarmiyska St. and a short walk from Khreshchatyk St. and Independence Square. The buildings and the street itself is very grandiose with giant brick buildings on either side of the street and a towering statue in the middle of the square. It is all extremely over the top and is clearly meant to impress visitors to the city and convey its power. It definitely succeeds on both counts. 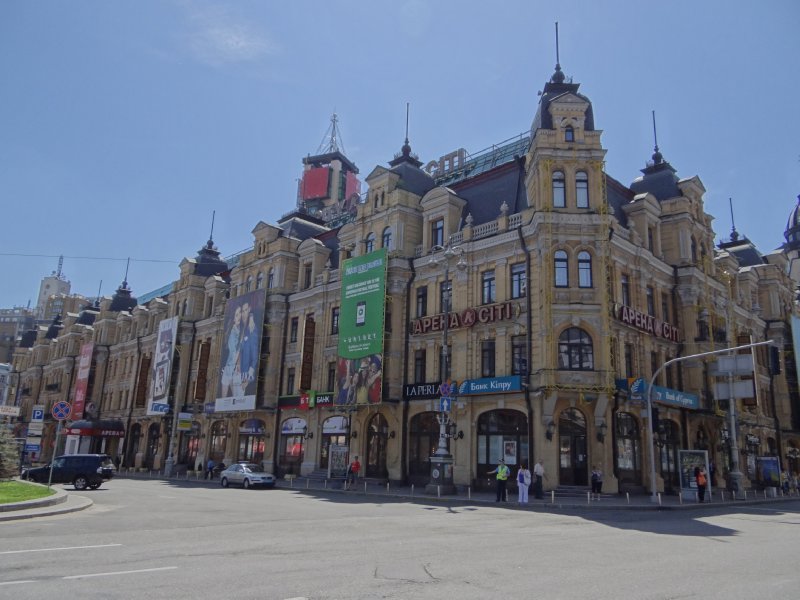 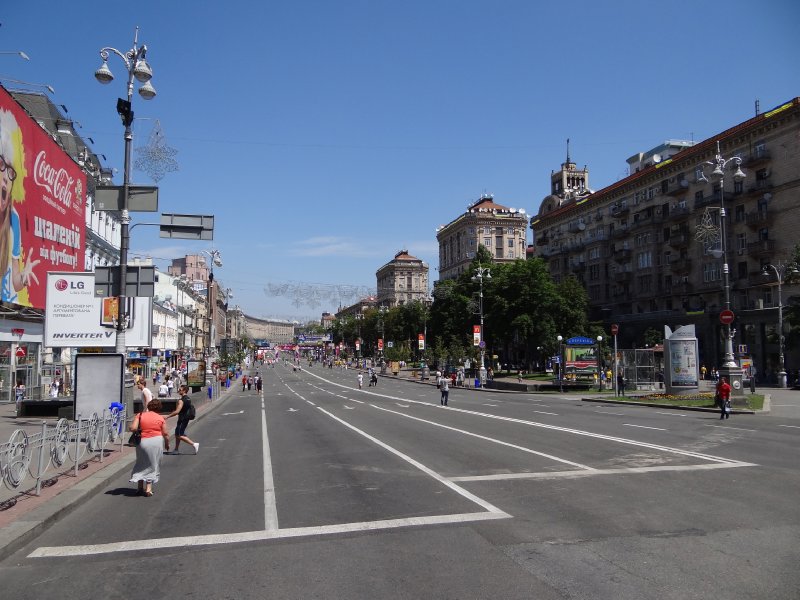 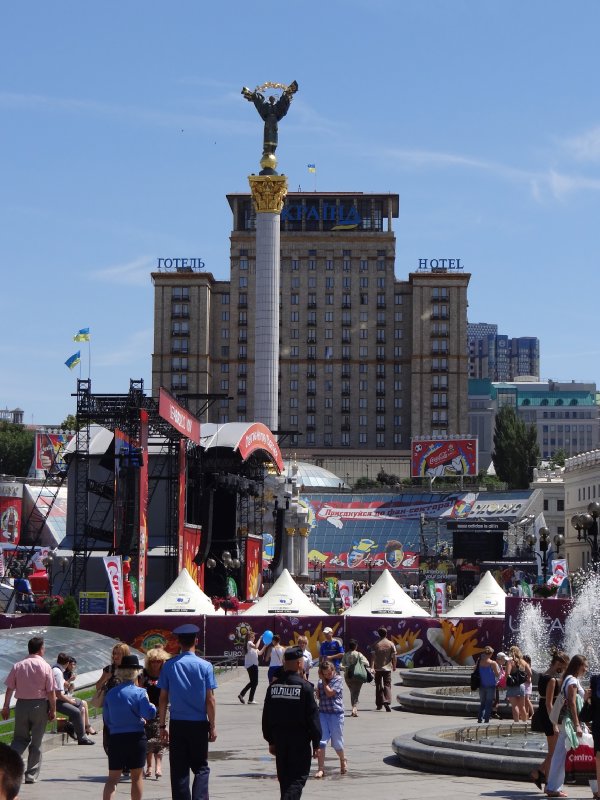 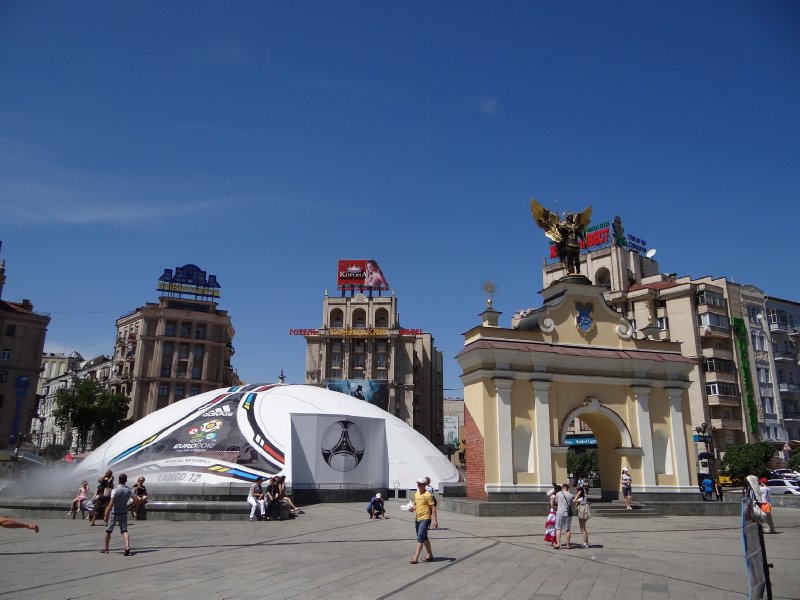 When we went out to see the city during the day the atmosphere was festive dominated mostly by the Swedes who were here to support their team and were having a great time being boisterous. The makeup of the crowd changed in the afternoon when the Ukrainians got out of work but the party only got better. The one thing that was noticeable however was that there were fewer tourists here who were just hanging out enjoying the atmosphere. It seemed all the tourists were either Swedish or foreigners of Ukrainian background and had tickets to see the game. It may have had something to do with the prices, and it’s too bad really because the Ukrainians were wonderfully friendly hosts and we were having an amazing time together celebrating the beautiful game. 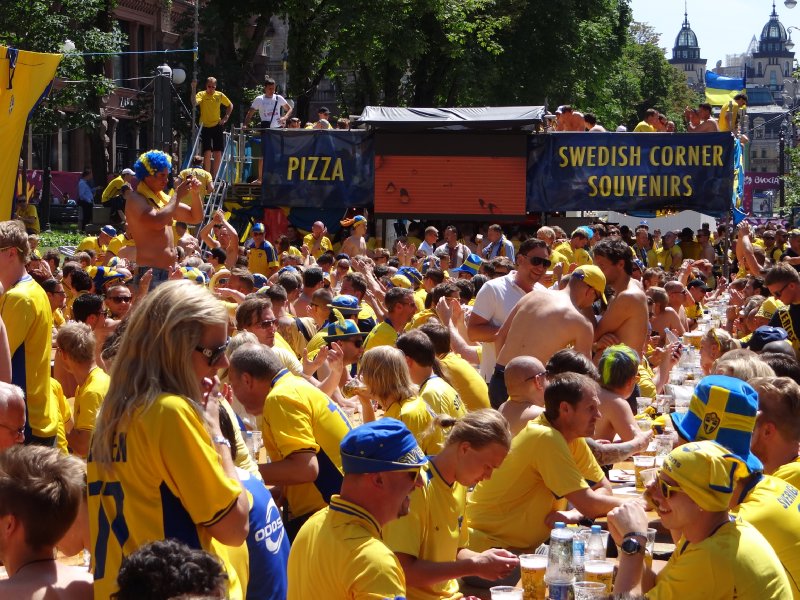 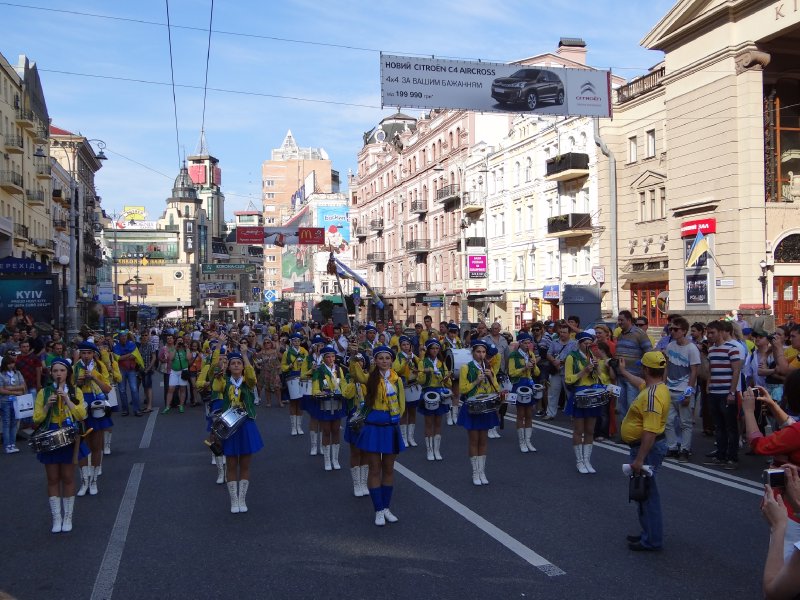 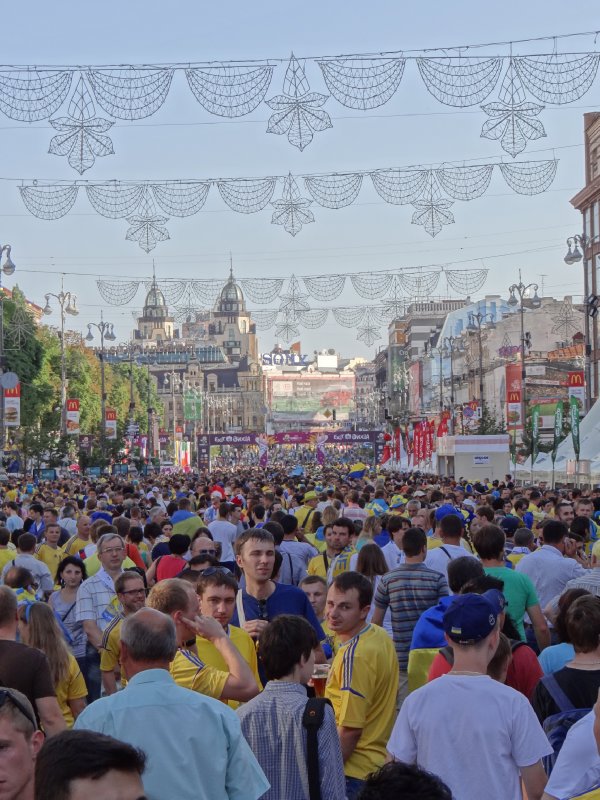 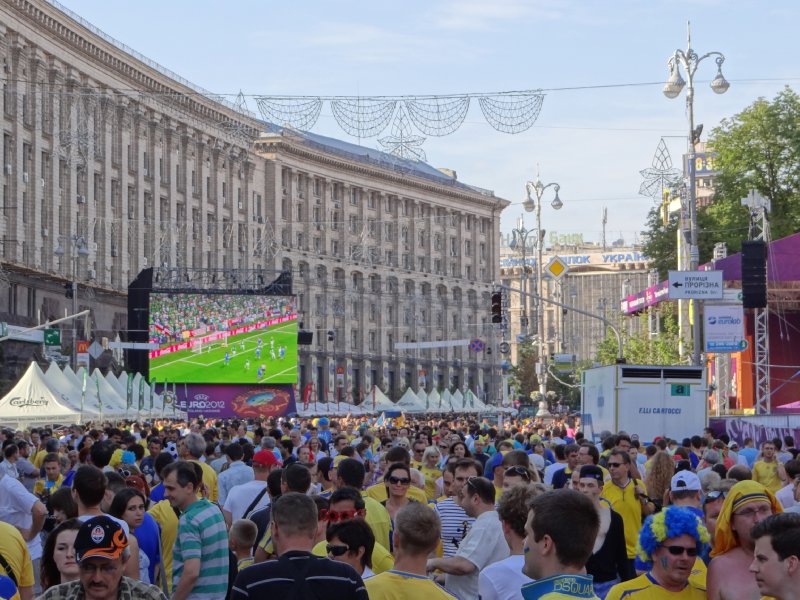 We were starting to get hungry so we started looking for some grub and were amazed at how expensive everything was. I don't know if this is normal pricing in Kiev but a dinner would be Canadian price or more and we were eating for a 3rd of that in Poland even in the middle of Warsaw. We were so annoyed that we actually ate lunch at McDonalds in protest. 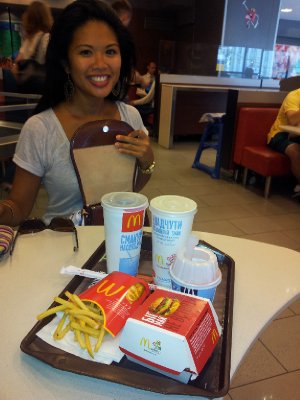 We were not looking forward to dinner but on our way back to our hostel we passed a small place on our street that seemed to be advertising reasonable prices. We decided to come back for dinner and it was the best decision we made all trip! The place is called Puzata Hata and it has some absolutely amazing Ukrainian dishes at rock bottom prices. It's a little bit similar to the Polish "Milk Bars" in that it serves delicious local food like momma makes but its far more tourist friendly in that you can actually see what you are ordering before you order it. It's setup like a cafeteria where you grab a tray and walk down the counter filling it with all matter of deliciousness with prices clearly displayed above the dishes. You then pay for each piece you picked up at the cash register at the end. For the Euro they made things even easier for tourists in that they had English speaking translators in addition to regular staff behind the counter to help with selection. They even accept credit cards! We LOVED this place so much we came back for every single meal! 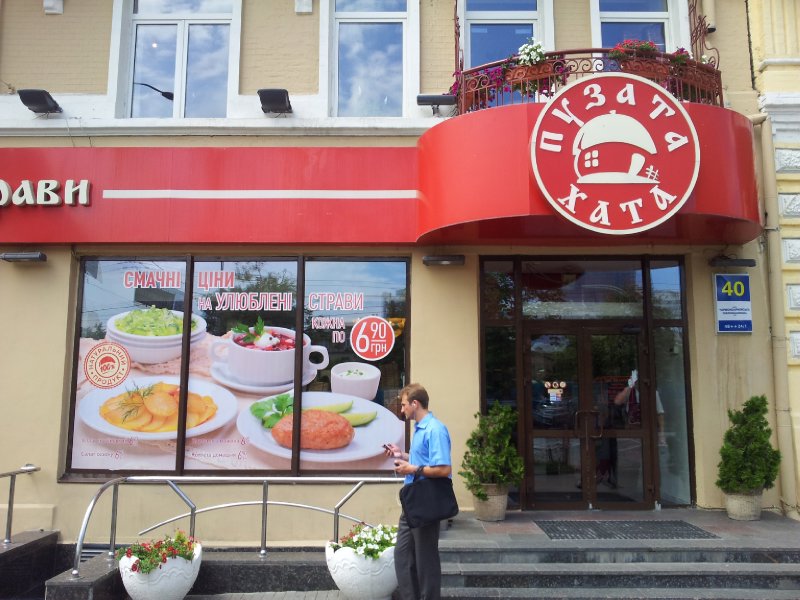 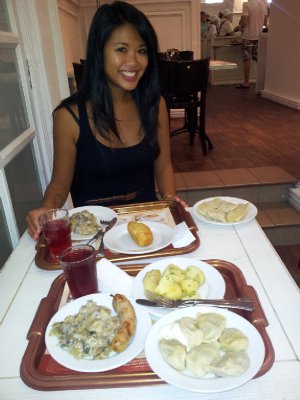 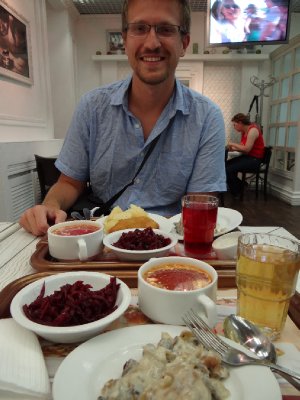 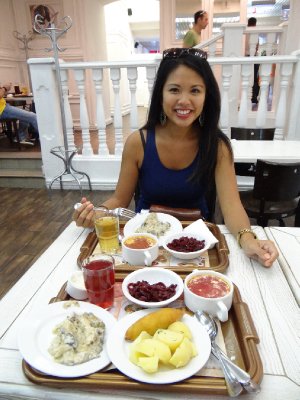 When walking around the city it appears peaceful but if you pay attention to the details you will realize there is a battle going on. The first thing that most tourists wouldn't notice is that everyone will address you in Russian instead of Ukrainian. This is a little weird since it's not the same language that all the printed material is in and (at the time of our visit) it is not the official language. The only reason I noticed is that I was trying to understand people in stores and restaurants since Ukrainian is similar to Polish but I could not make out anything. It wasn't until I wore my Polska t-shirt for the Poland-Russia game and went into Puzata Hata that I realized why it was. The ladies behind the counter were all of a sudden beaming at me and describing the dishes in a language I COULD understand quite well. They were speaking Ukrainian for the first time in all our visits. The city and the country is clearly very divided and it's clear one side holds the majority of the wealth and power, however, the opposition is not exactly idle and made its presence known through their support for a certain jailed politician. 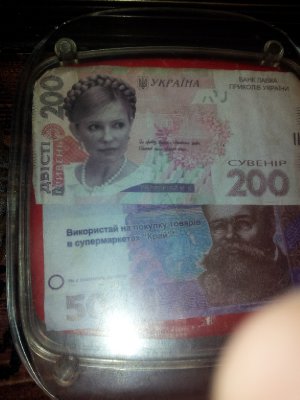 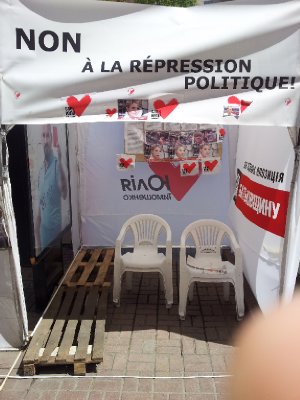 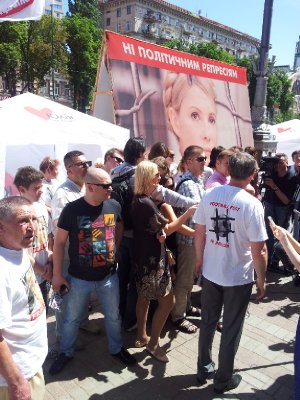 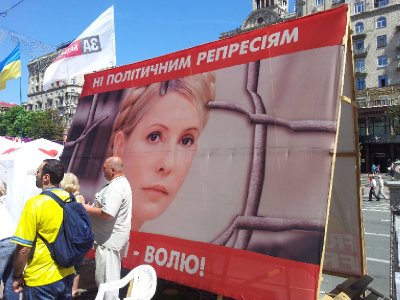 However, it was clear that at least for this evening, everyone was united in one goal. To cheer on their U-KRA-I-NA to beat the Swedes! The atmosphere was amazing even though most people did not really believe Ukraine could win this game. They were hoping that at least they could have a respectable showing. I hate to toot my own horn, but I always thought Ukraine had a very good chance, and then this happened.

Yup! Ukraine surprised all the sports analysts and critics and beat Sweden 2-1 in a very convincing fashion! It was an absolutely magical experience to have been there cheering Ukraine on to their win in their first ever game at a Euro tournament. I still can't help to smile when I think about it. The people in the country are so amazingly friendly and genuine and you really feel for them and their struggles. I hope that if nothing else the Euro can have a bit of uniting effect because in the end a country can only be strong and successful if it is united.

Posted by dariusz 08:54 Archived in Ukraine