Exploring Kiev without the Euro Fever

We woke up the next morning with a bit of a hang over and took a closer look at our hostel. The place was actually really nice and offered lots of information on great cultural things to do in Kiev, such as for example, this: 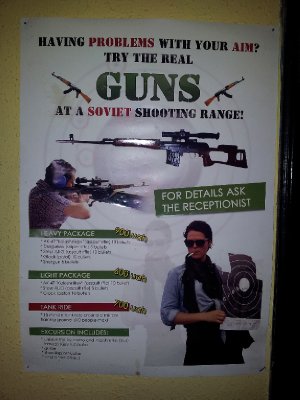 You can drive a tank, shoot an AK47 and a Dragunov, all while enjoying free drinks! What a deal!

The hygiene and cleanliness was impeccable as well and the guests seemed to be really good at cleaning up after themselves. 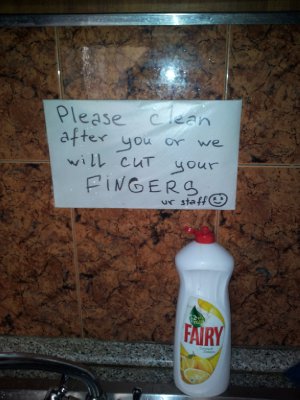 All joking aside we really liked our place but somehow Kristine manage to convince me that instead of the awesome soviet warfare tour we should see cathedrals and things.

Having just witnessed history being made the previous night, with Ukraine beating Sweden in their opening match, we were convinced Football was going to be on everyone's minds. However as we ventured out into the city we were quite surprised to discover that you could hardly even tell there was a Football tournament going on. The Swedes had left the city either late last night or early morning and we saw very few Ukrainians wearing the national colors or even Ukrainian flags. I mean sure, in the Fan Zone there were Football fans around, but outside of that area you would have never known this was a Euro 2012 host city. This was in stark contrast to the craziness in Warsaw where Poles were wearing their national colors, polish flags were everywhere and cars almost always had Polish flags or some other sign of support. I mean it was the Ukrainians that won their first game and the Poles that performed rather poorly. To be honest I am still not exactly sure how to explain this.

Regardless, we wanted to see more of Kiev before we had to go and we weren't going to stick around the Euro areas anyway. We were kind of glad everyone had left because it meant less crowds for us. We decided to take the extensive subway system to the bank of the Dnieper river where one can find the famous St. Sophia's Cathedral and the Kiev Pechersk Lavra or Cave Monastery. The caves were dug out by priests who lived there as hermits and were eventually mummified there when they died. The big draw being that for a symbolic fee you can go down to the caves and actually see the mummies.

When we emerged from the Arsenalna subway station we were very pleasantly surprised. Gone was the concrete jungle and ridiculously expensive boutique shops and in its place was a really pleasant street lined with trees. We followed the street to an even more pleasant green park on the bank of the river with some very interesting trees which appear to grow upside down. 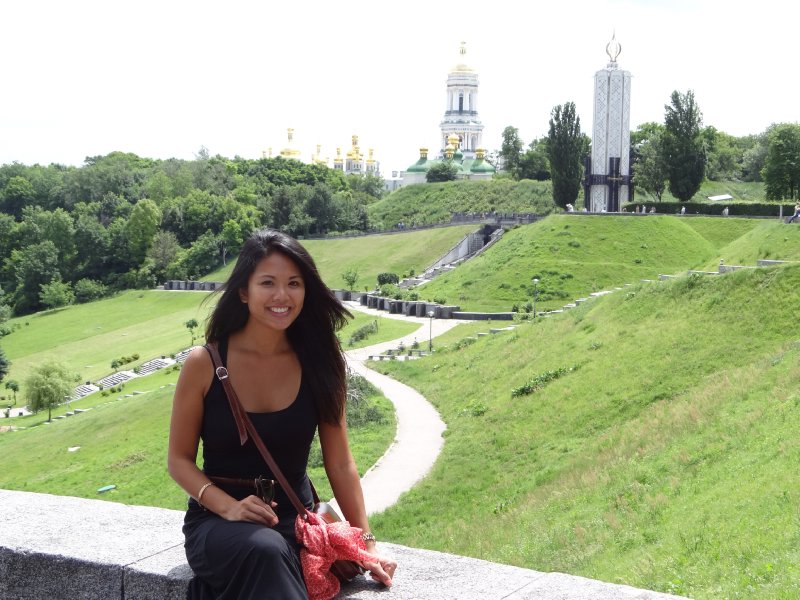 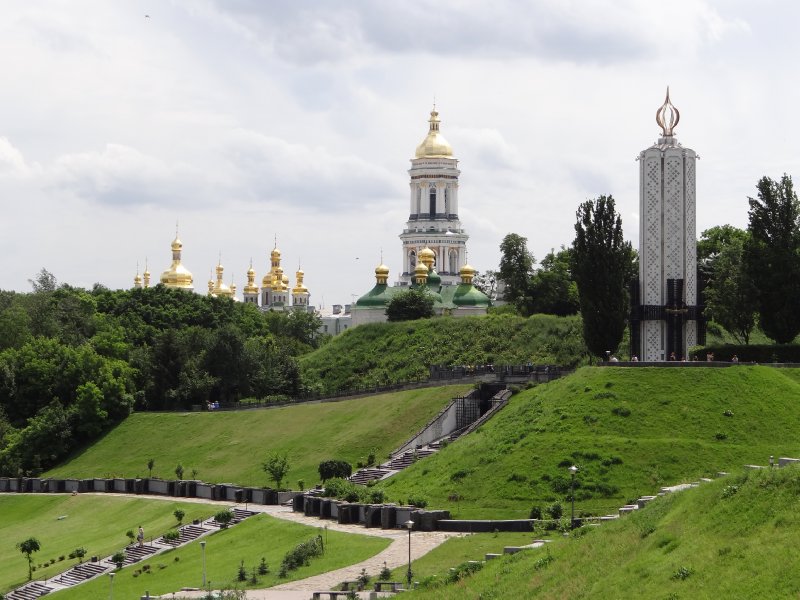 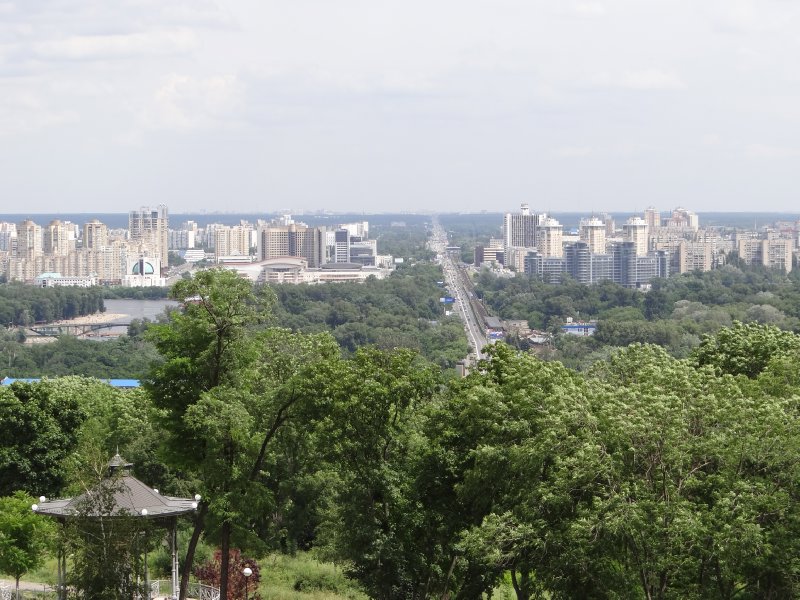 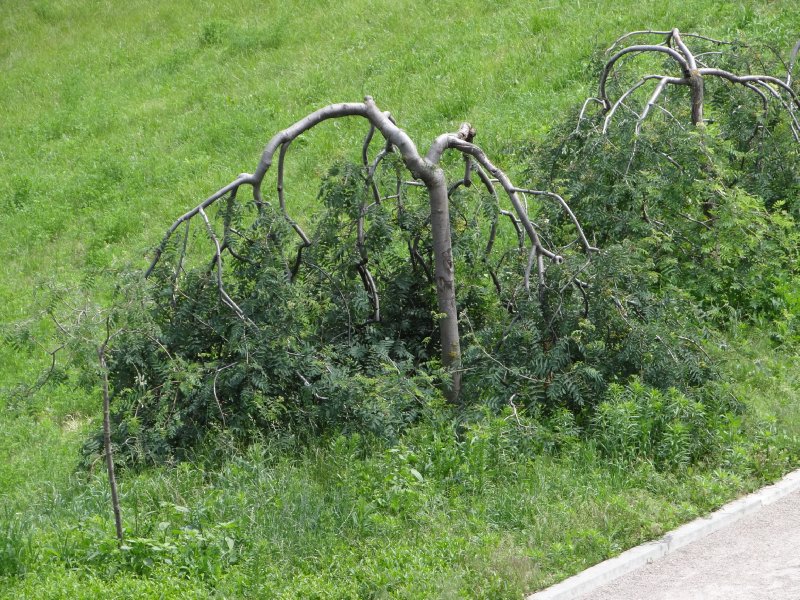 If anyone has any idea why these trees grow like this please let me know since I really have no clue.

Having noticed a giant religious looking tower/monument on the hill behind Kristine we decided to check it out up close. It turns out it's a beautiful and very moving memorial to the victims of the man-made Ukrainian famines in the 30's. The Holodomor or "genocide by hunger" killed up to 10 million ethnic Ukrainians and it's truly amazing that ethnic cleansing on this scale is given so little attention in history lessons in our schools. The famine was a pre-meditated way that Joseph Stalin and the Soviet Union tried to both eliminate and subjugate the Ukrainian people. The chilling museum underneath the monument tells the story in vivid and equally disturbing pictures, paintings and written works. Unfortunately most of the exhibition is only in Ukrainian but it's not hard to figure out the story from the visual art and you can always read up on the rest later. 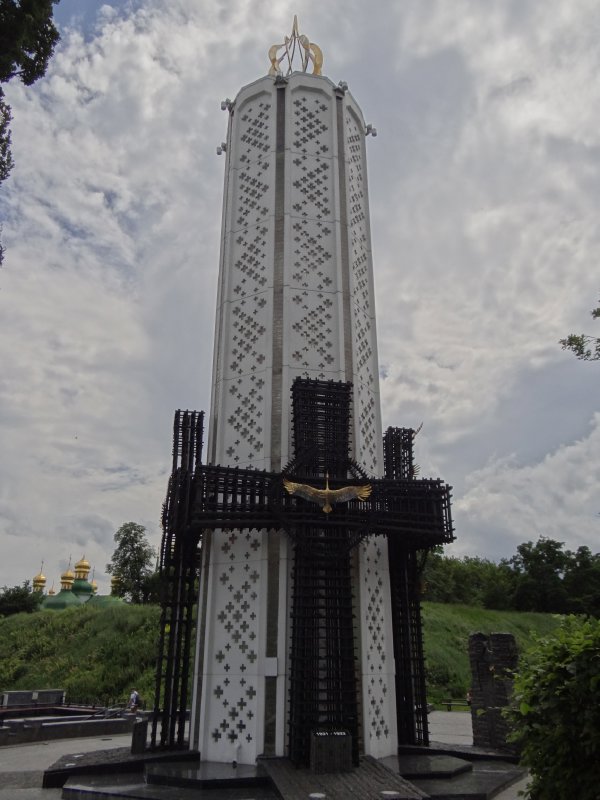 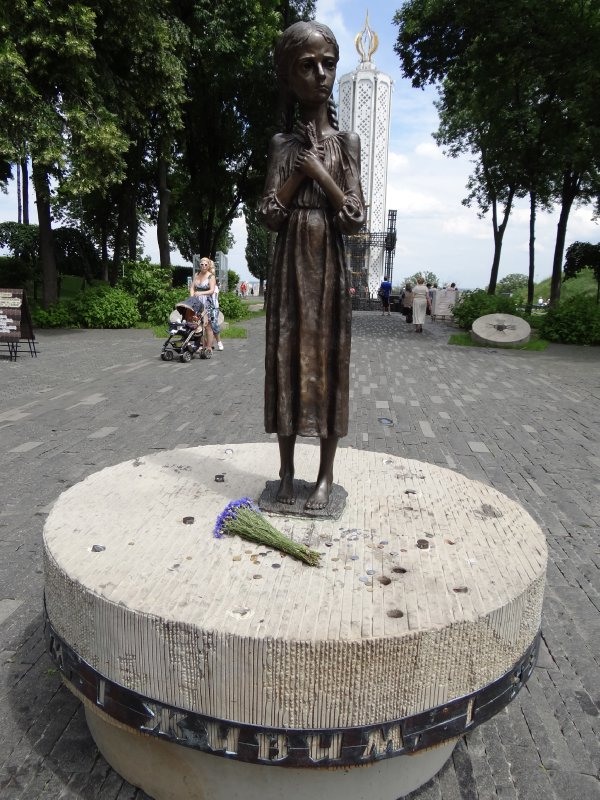 We continued down the river bank and finally got to St. Sophia's which definitely did not disappoint. It's a gorgeous looking cathedral with impressive murals and pretty golden spires. 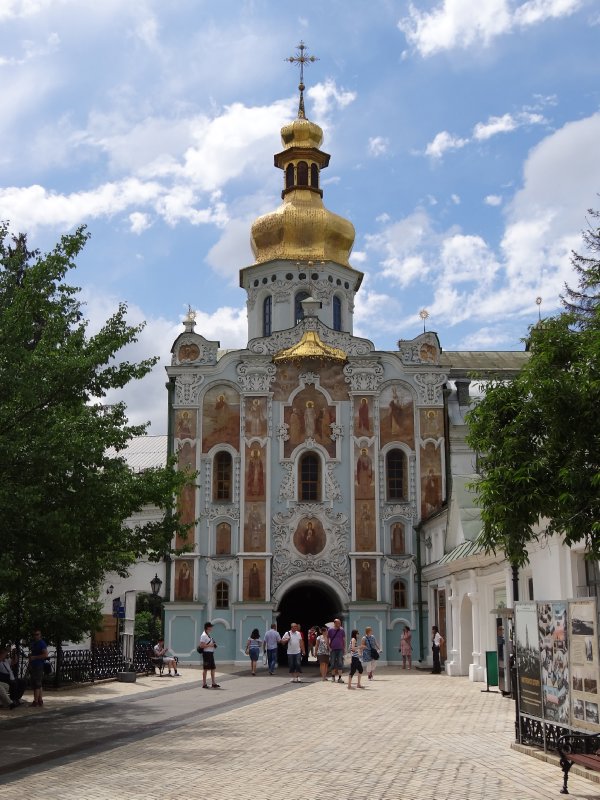 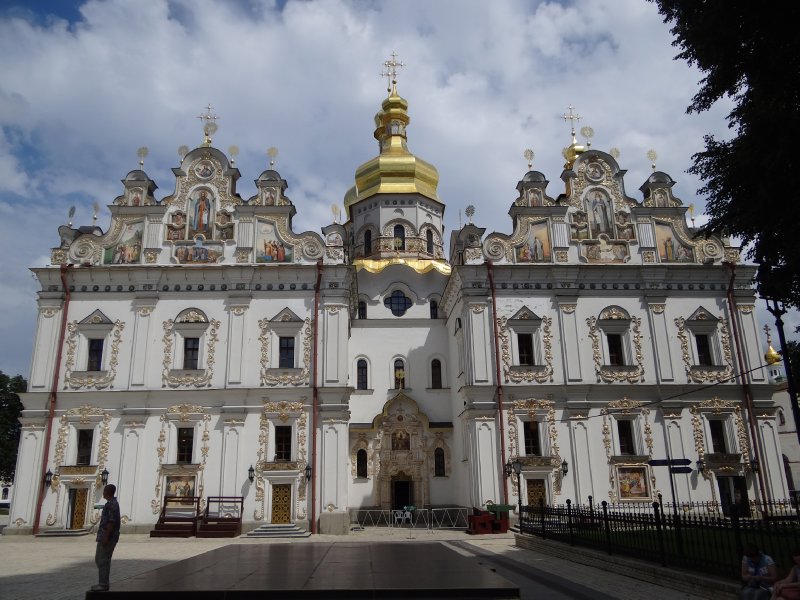 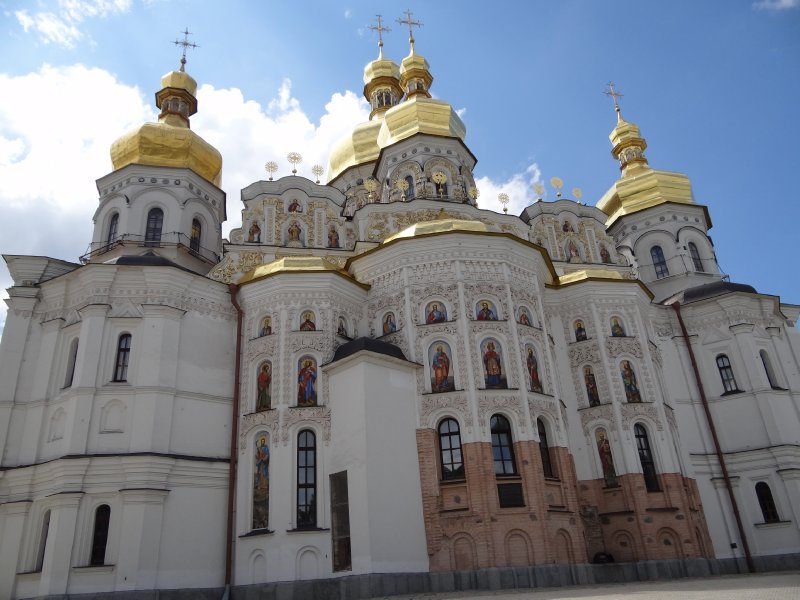 Walking through the passage ways and court yards around St. Sophia we finally made it to our last destination, the Pechersk Lavra or Cave Monastery. I was really excited to see the mummified monks but Kristine was a little freaked out into descending into what is essentially a tomb. I have no idea why but for some reason I thought the monks facial features would be visible through the embalming. It turns out though that the monks are first put into casts and then mummified which means they all look exactly the same, a bit like large dolls without faces. I was disappointed and Kristine was relieved. The cool thing about Pechersk Lavra though are the grounds and the above ground monastery itself. The grounds are a park covered with beautiful flowers overlooking the river with pathways snaking around pretty buildings and ordinate walls. It's really a wonderful pleasure to just stroll around on a sunny afternoon and soak in the atmosphere. 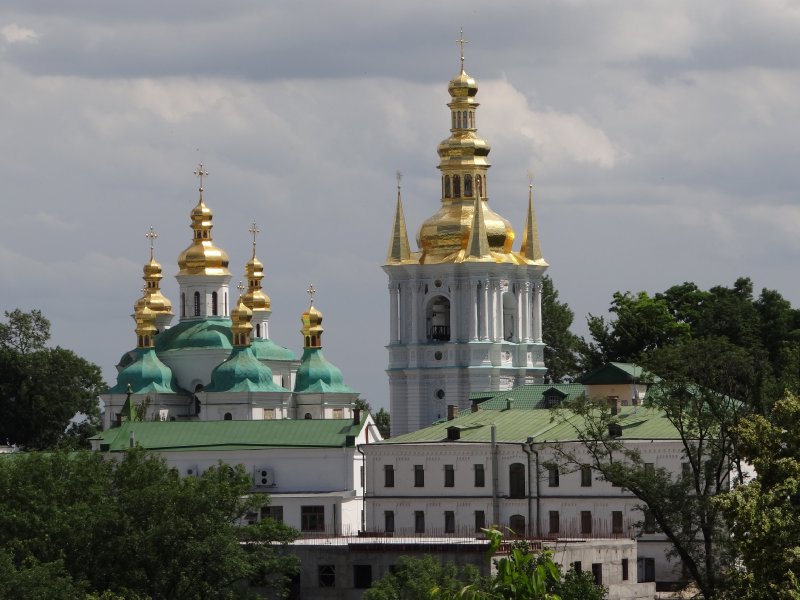 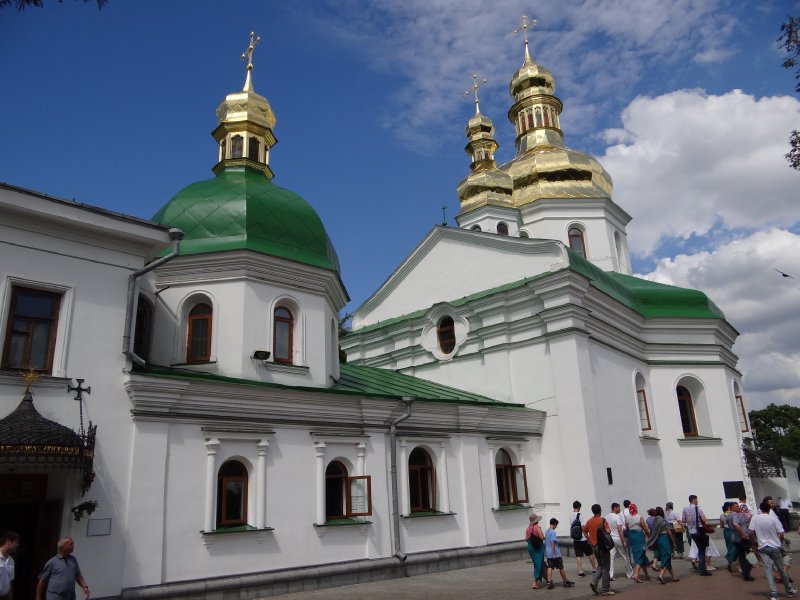 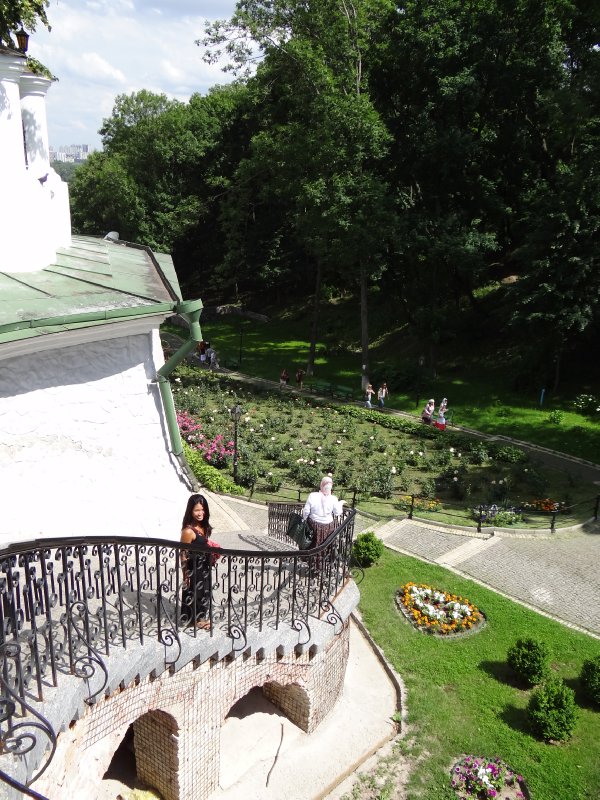 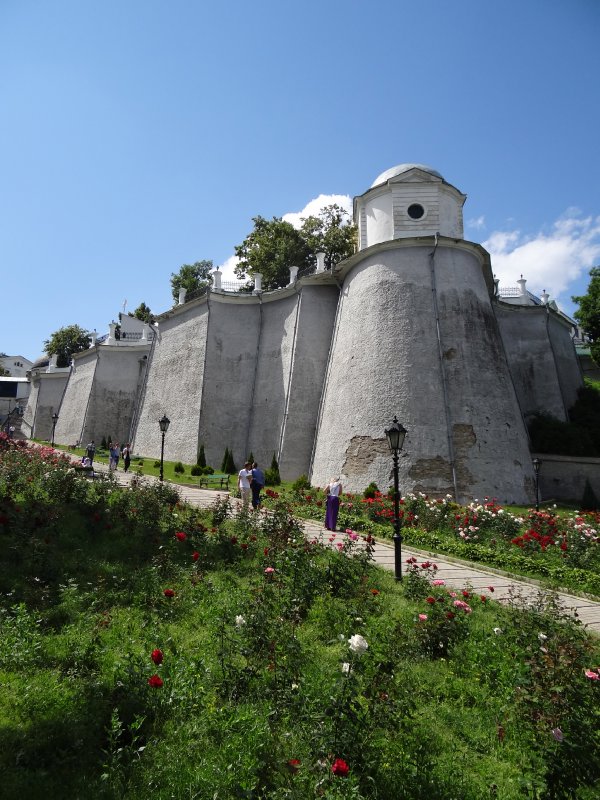 In the end we had a wonderful day and really enjoyed visiting this part of Kiev. The center of the city is definitely impressive and grand but the Dnieper river bank is more quaint, green and intimate offering a more relaxed atmosphere. If you have some time to spend in Kiev make sure you don't miss the Dnieper river bank.

Posted by dariusz 08:16 Archived in Ukraine