After relaxing on the beaches of Zanzibar in the spoiled luxury of Sazani Beach for close to a week we were ready to tackle some real backpacking again. We wanted to sight see the legendary Stone Town, the capital of Zanzibar with a fascinating history, but in order to do that we had to somehow make our way back across the island. Having taken a comfortable but extremely expensive ($50) cab to get to Sazani we wanted to find a cheaper way to get back. However, having all our bags with us, we were not entirely thrilled at the idea of taking the daladala with 30 other people squeezed into the tiny little van. There was also the small matter of getting to the main road to actually catch the daladala in the sweltering heat while carrying all our bags on our backs and not getting jumped. We had heard that there was a shared tourist transport somewhere but as we asked people no one was really able to tell us where and how we were supposed to catch this. After a number of mis-directions and dead-ends we did finally find the Jumbo Brothers shared tourist transport. They charge $10 a person and pick you up at your resort and drop you off at the place you're staying in Stone Town. Yes, it's more expensive than the daladala but it's so much more comfortable!

We had booked a room for $35 per night at Princess Salme Inn, which was an awesome deal since most Stone Town accommodations run close to $100 per night, and the Jumbo Brothers transport dropped us off right in front of the door as advertised. The Inn is actually in behind a couple of buildings very near the port area which, on first impression, looks a bit sketchy. The building itself looks like a giant unpainted concrete slab, however if we were a bit uneasy walking down the tight alley to the front door, the staff inside immediately made us feel welcome and comfortable. Princess Salme is an amazing deal with extremely clean rooms, lovely honest people, and a wonderful roof top that we ended up spending all our evenings on chatting with the other guests. 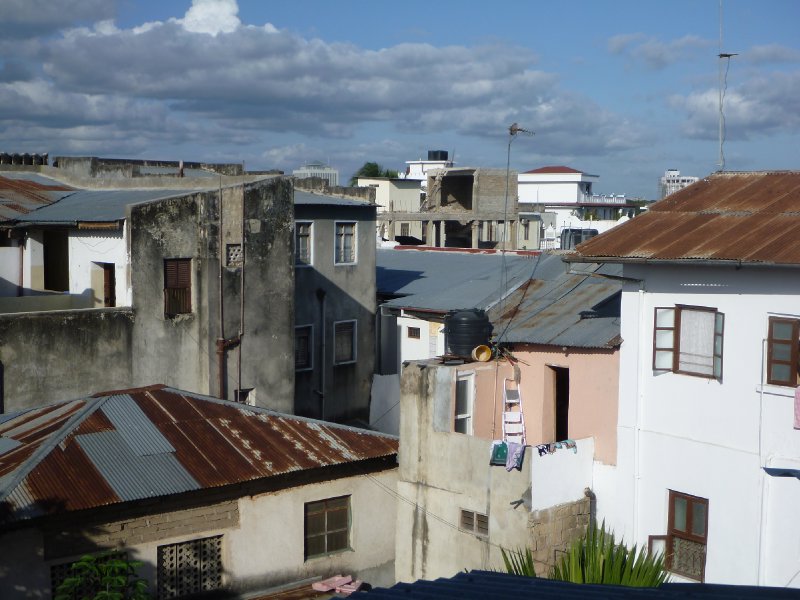 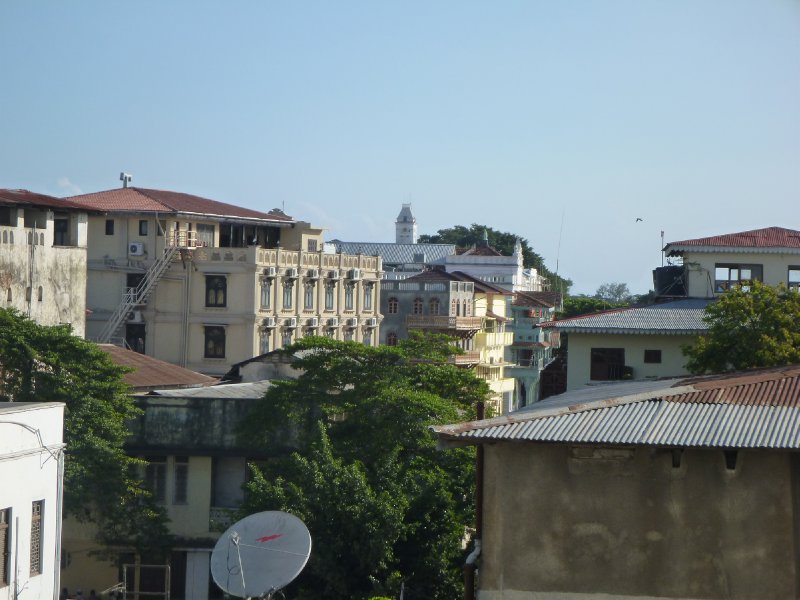 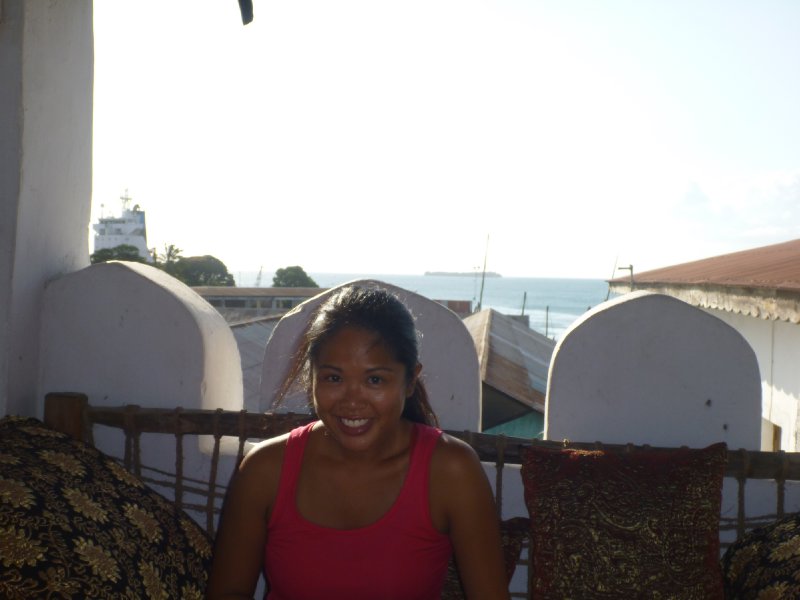 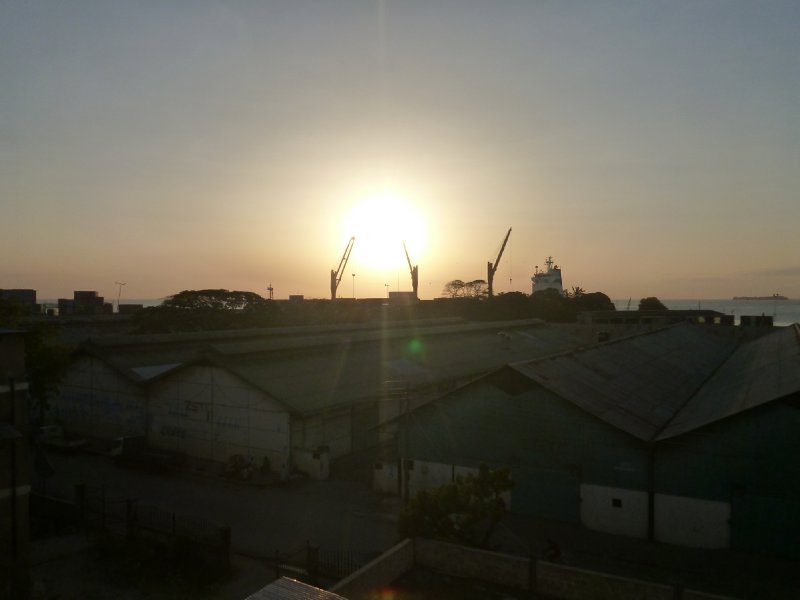 The next morning we went out to explore Stone Town. The old part of the town is a maze of narrow streets and alleys that is steeped in history and atmosphere. There are ancient wooden doors, hotels that looks like something Aladdin would stay at, old churches and mosques, defense towers, meeting squares, shops where you can buy a magic carpet or a hookah, gardens and all types of street and spice merchants. It's a smorgasbord of cultures and influences with everything from the middle east to Africa being represented in a wonderful fusion. The best way to explore this area is to get lost in the maze and just soak it all in. 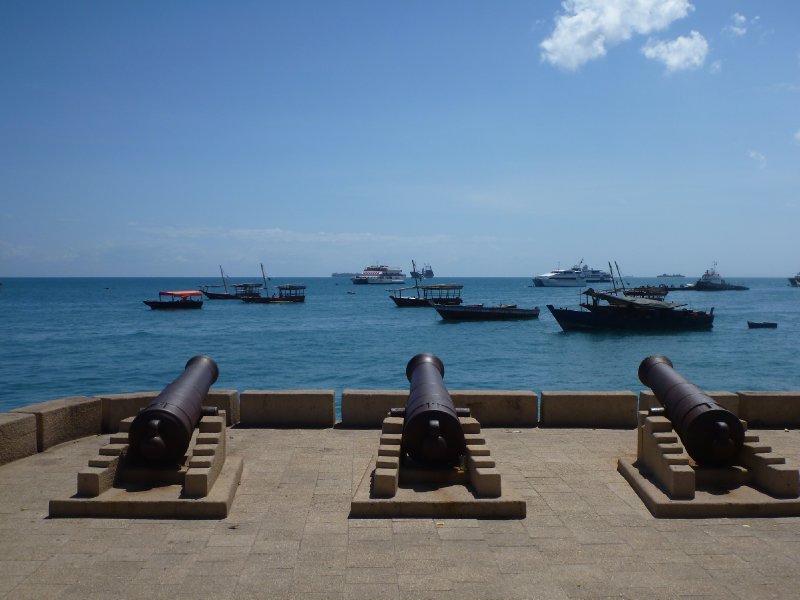 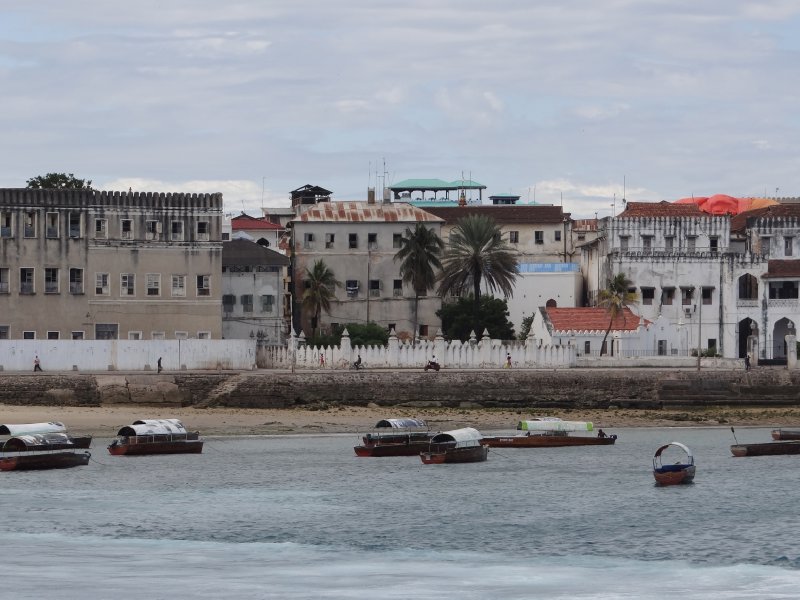 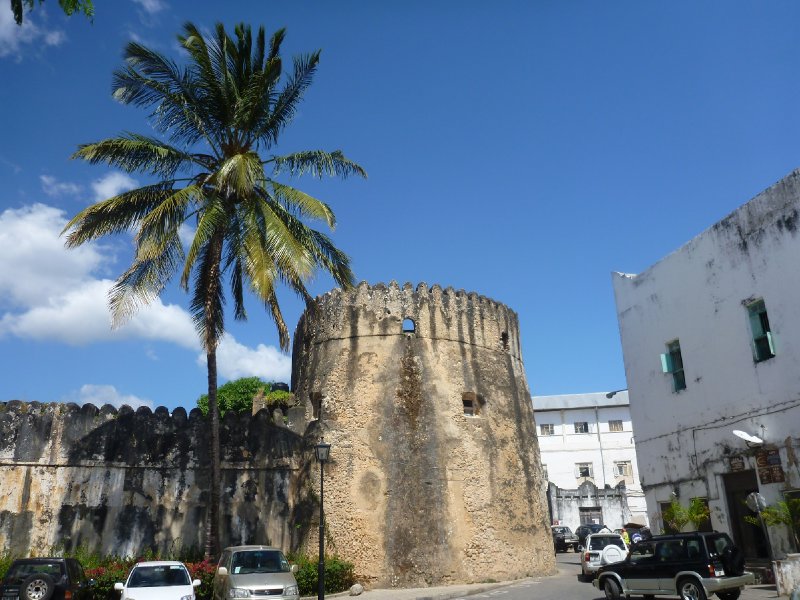 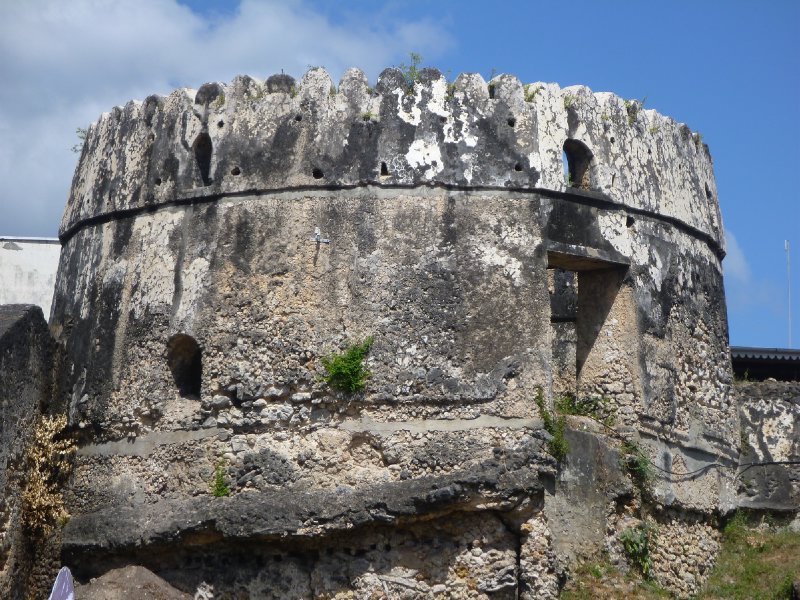 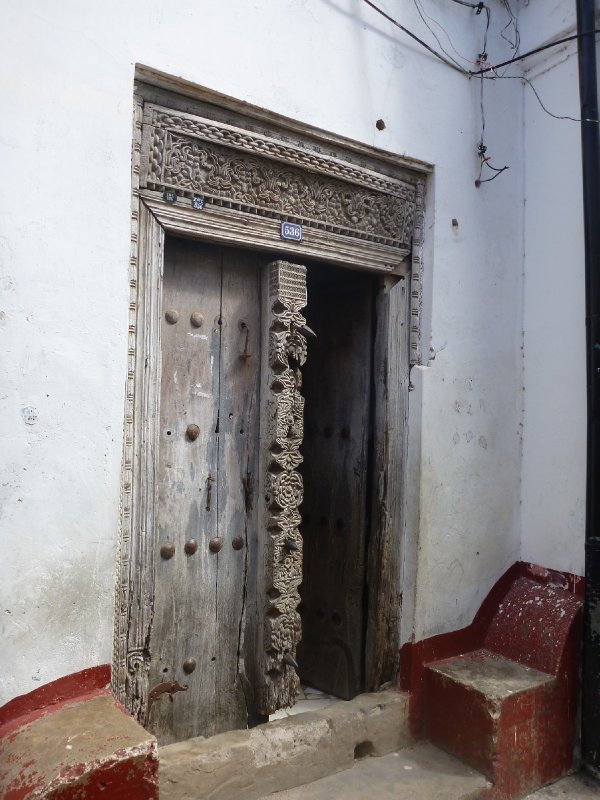 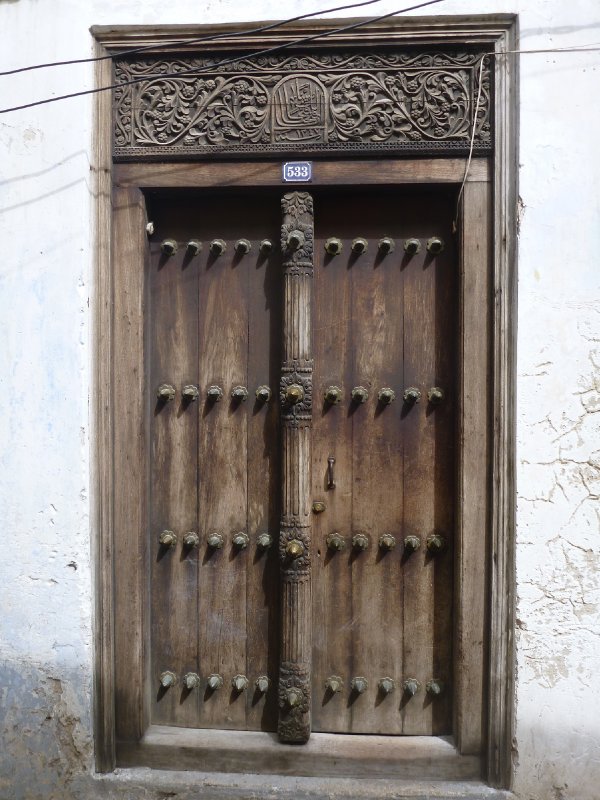 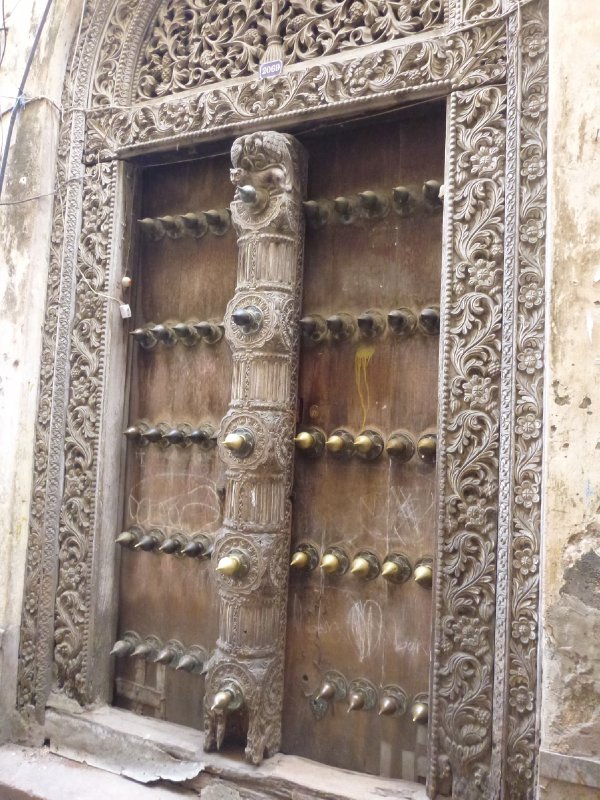 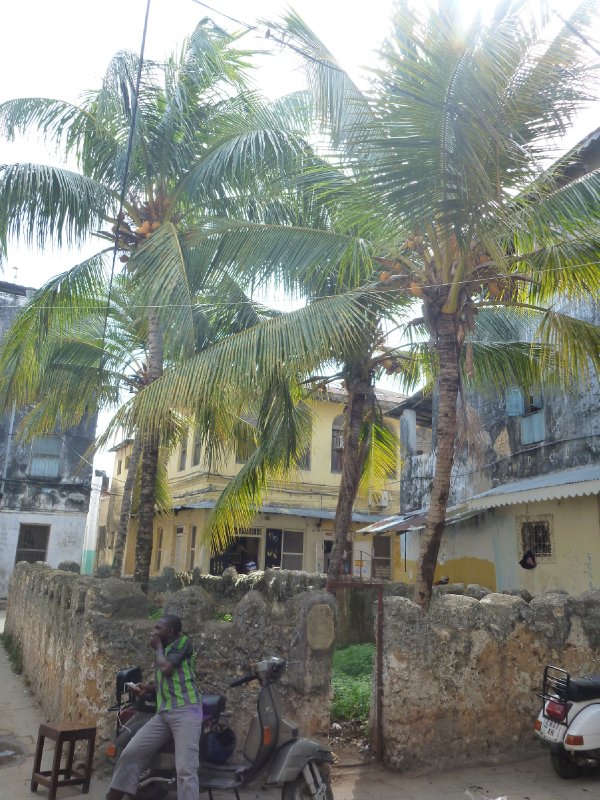 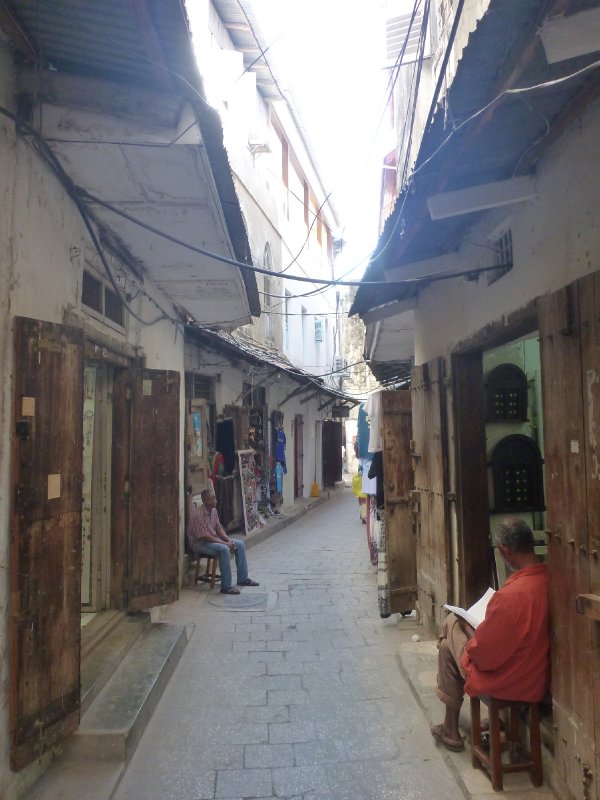 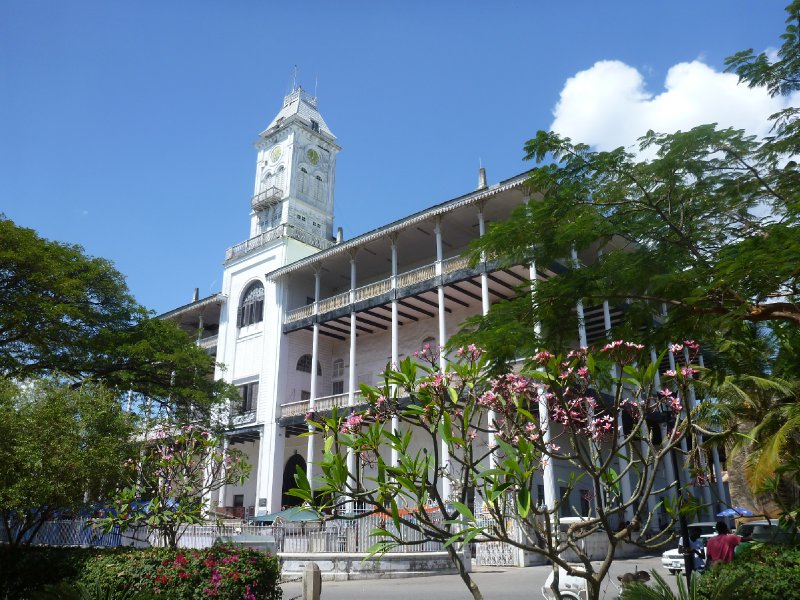 We did have one specific destination in mind though as we were weaving our way through the maze. We wanted to visit the Anglican church that stands on what was the last active slave market in the world, a true monument to the islands tragic history. Zanzibars location on the Indian Ocean just off the east coast of Africa meant it was the perfect place for Arab slave traders to setup shop and they did so for hundreds of years. In fact there would probably still be a slave market here if it wasn't for Anglican bishop Edward Steere, Dr. David Livingstone and the support of the British crown. They put their own lives on the line in order to stop the slave trade on the island and Steere is now buried behind the church altar while a cross is fashioned out of the wood of the tree where Livingstone was buried in Zambia. The altar itself is exactly where the slave markets whipping post used to be. This was a post that slaves would get tied to and whipped to illustrate their strength to potential buyers. The idea being that the more whipping the slave can withstand the stronger he or she was and therefore would fetch a higher price. You can imagine this often turned out to be tragic for the weaker slaves. Disgusting. 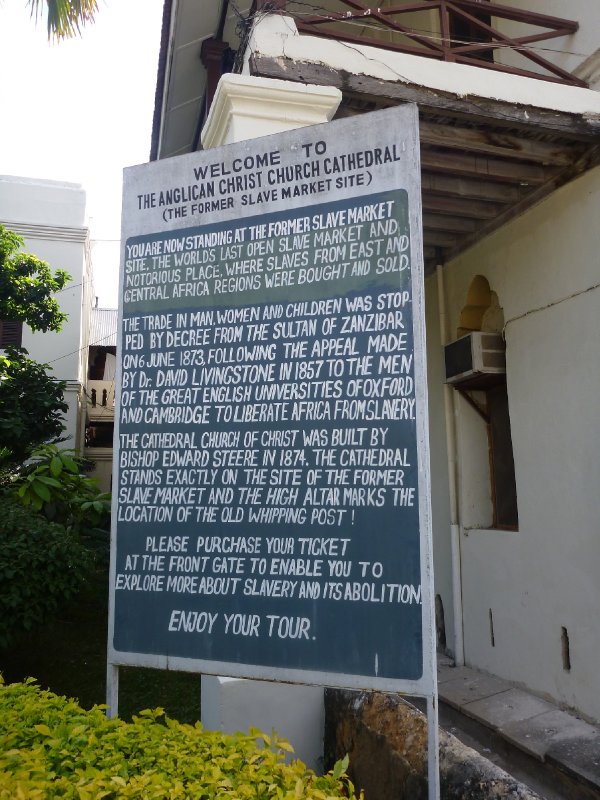 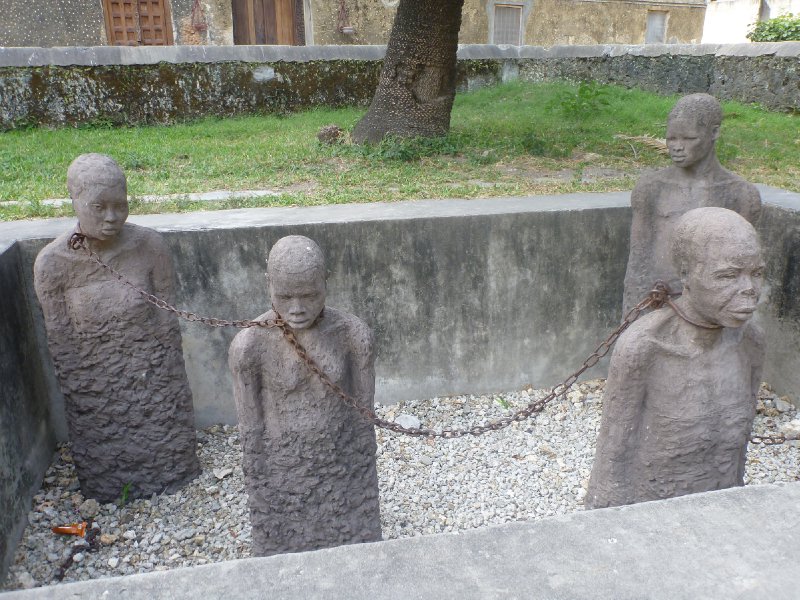 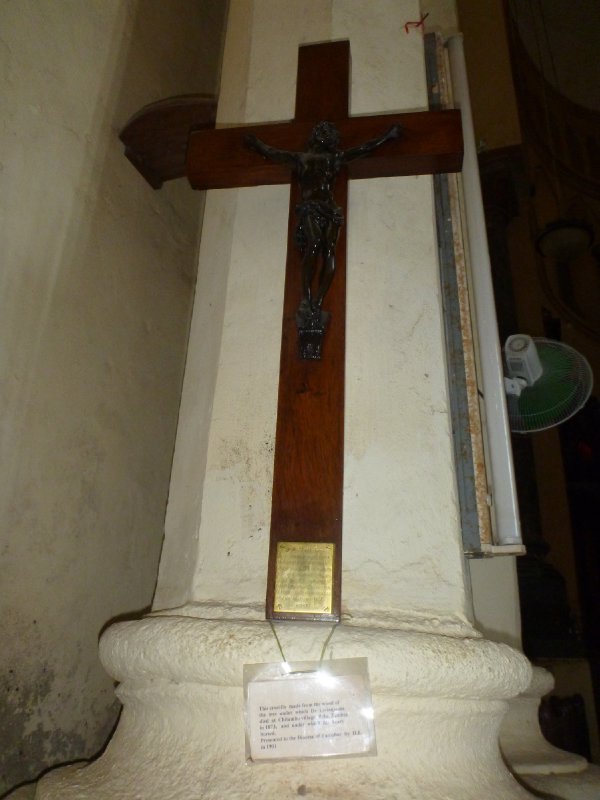 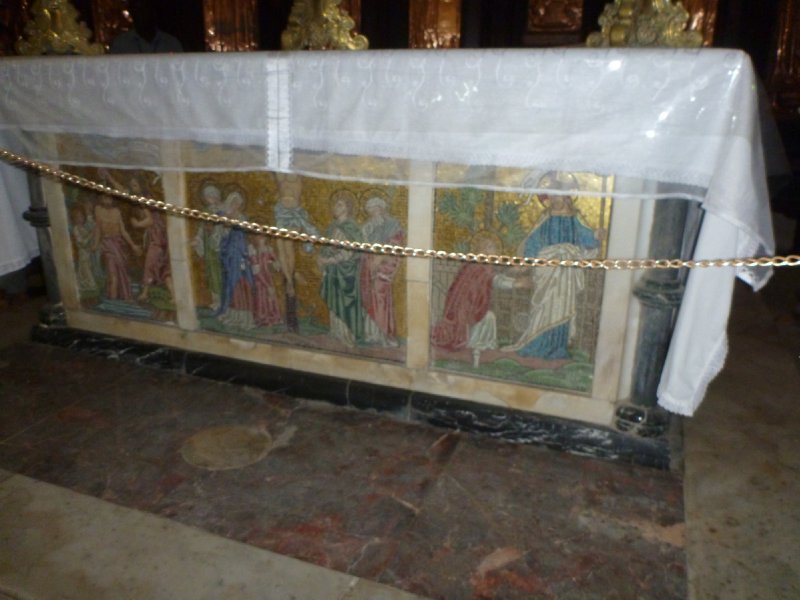 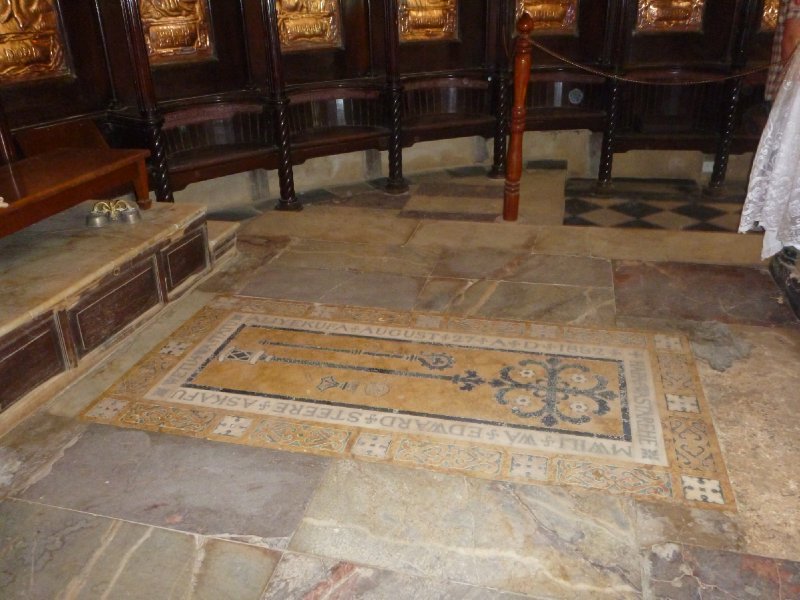 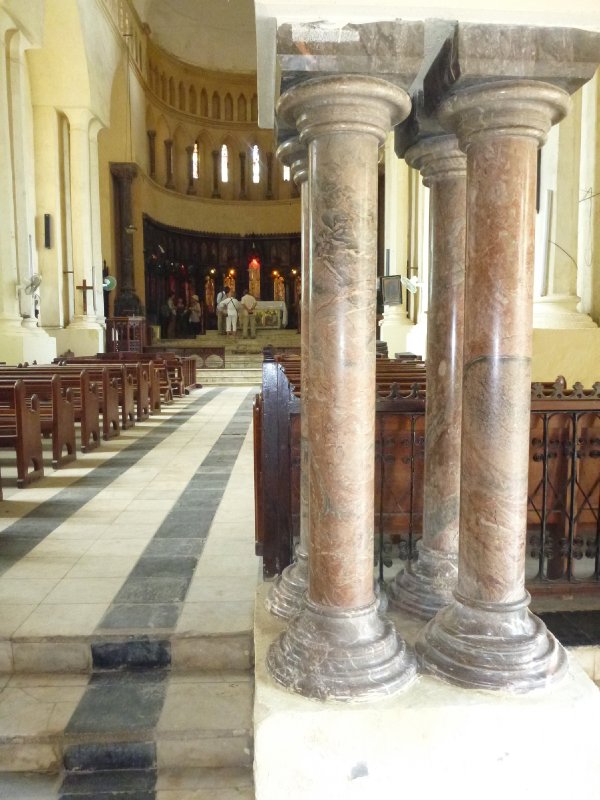 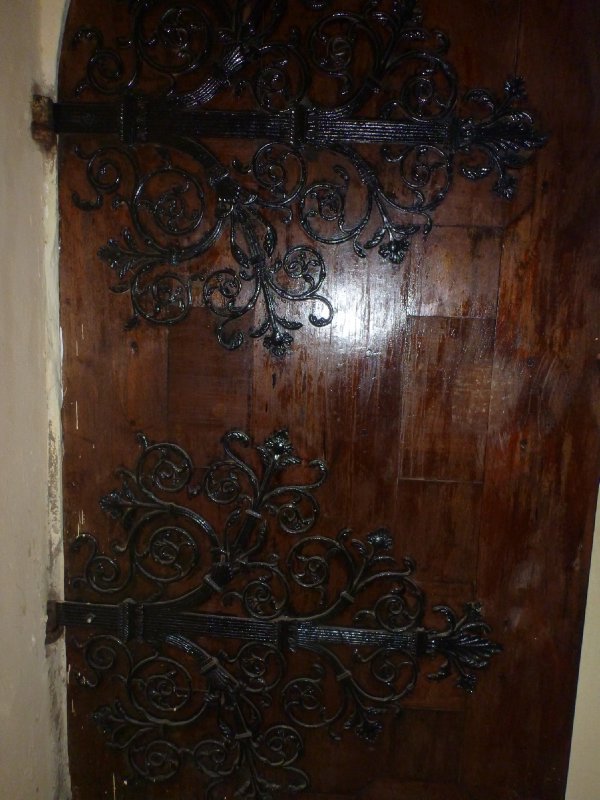 There is a small slavery museum near the church grounds with a minor entry fee that gets you a guide to show you around. It is really well worth the price. You get to see the cells that slaves used to be held in and learn about the horrific history of this place. It is hard to imagine that people can actually be this cruel to other people. 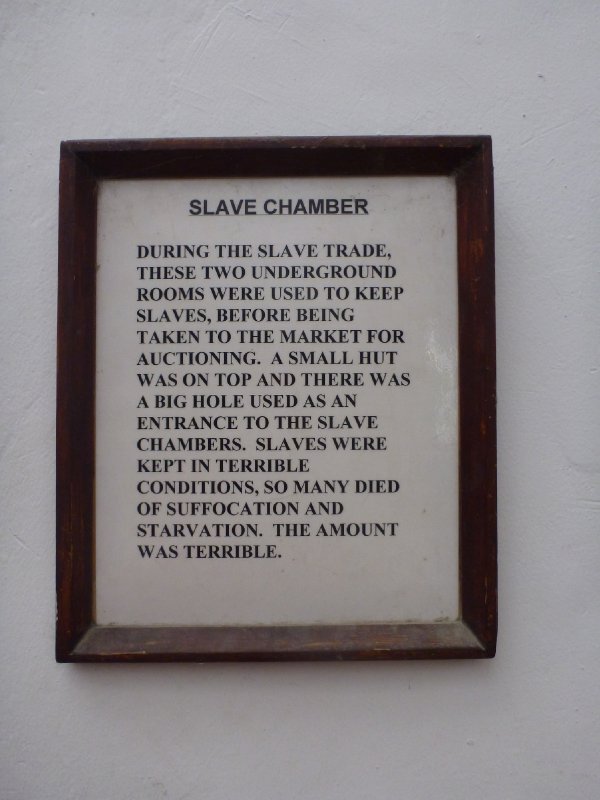 One of the interesting things that our guide showed us is a spot where, as he says, three different religions meet. Take a look at the picture and see if you can spot all three of the religions. 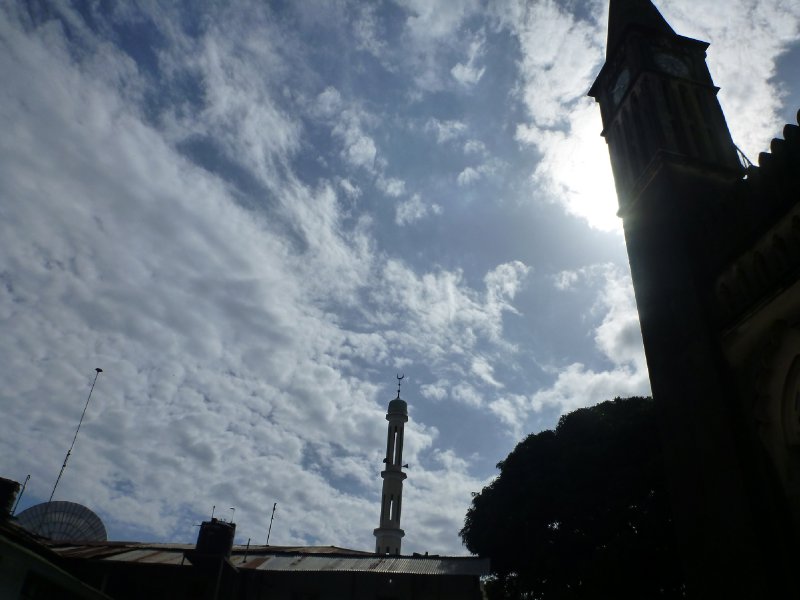 There is the christian cross, the islamic half-moon and the sign associated with the newest religion, the satellite dish.

After visiting this heavy place we decided to explore the islands less morose history by visiting the Mercury's Bar near the beach. The bar is named after the islands most famous son, Freddy Mercury of the band Queen. It is interesting to sit in a bar dedicated to one of the most famously gay men in recent history on an island where most people would probably stone him to death for being gay. I suppose fame and money trump bigotry and narrow mindedness. Regardless, we had a good time sitting around sipping our drinks and watching the sun go down behind a soccer game that broke out on the beach. It was a fitting end to a long day exploring one of the most fascinating towns in the world. 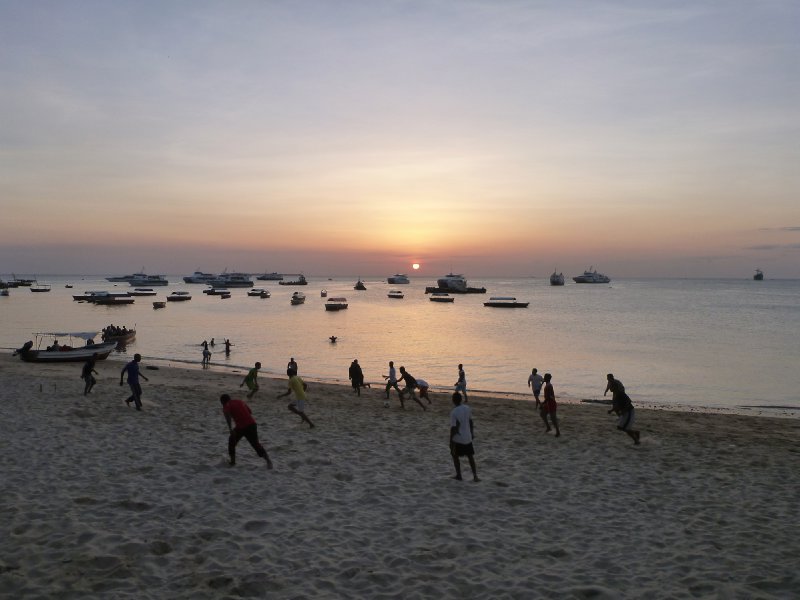 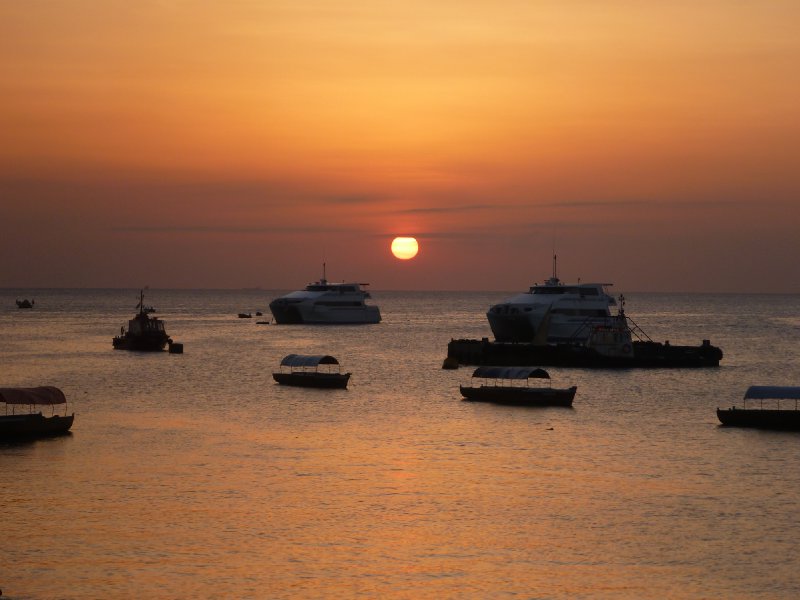 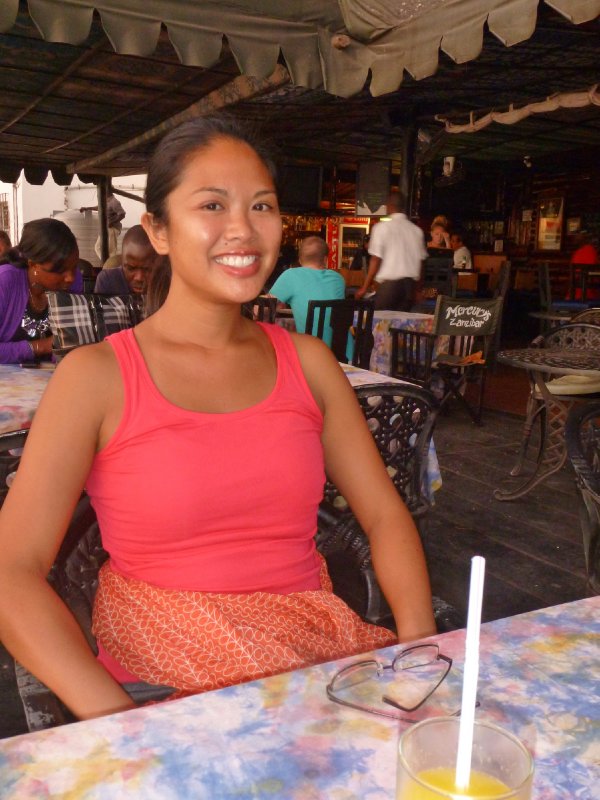 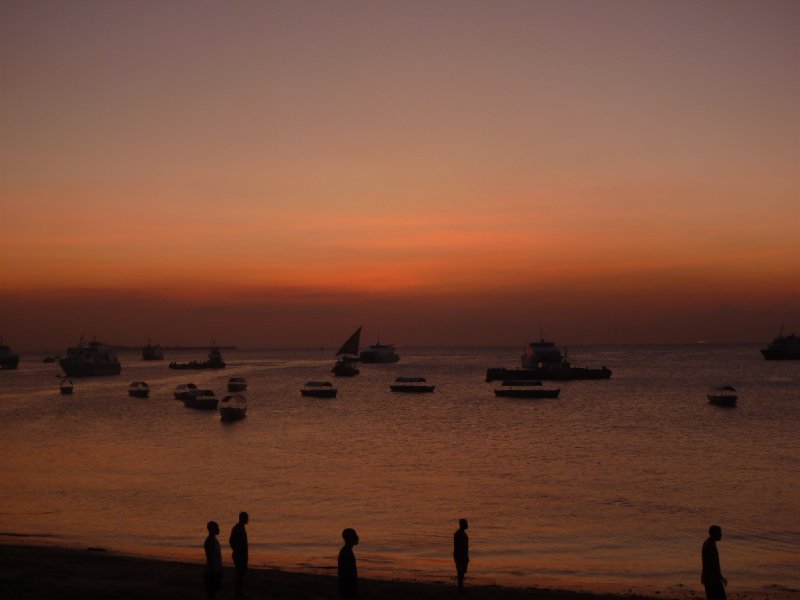 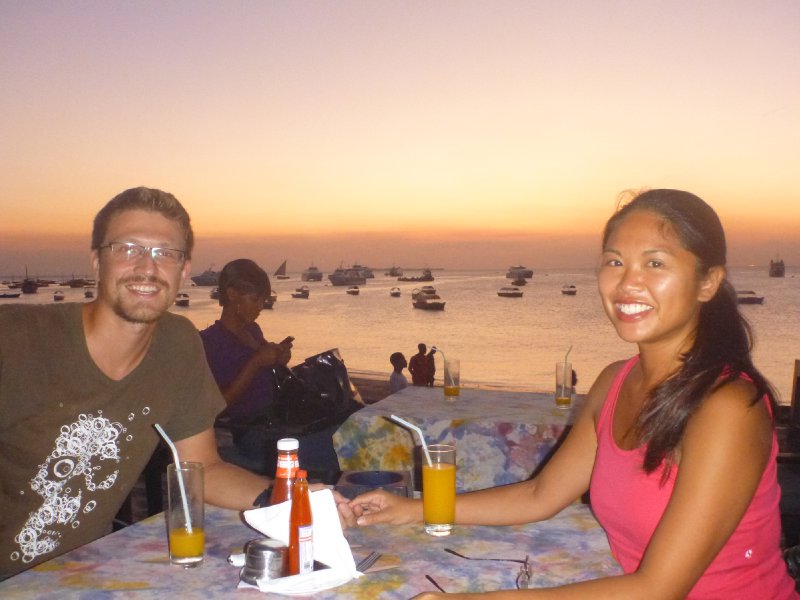 Posted by dariusz 09:26 Archived in Tanzania