"Whoa man, where you walkin so fast? Slow down!" - This an actual sentence a local Caye Caulker resident said to me in a thick Caribbean accent on my first day there and it probably describes the place better than any words I could invent. The place is CHILL, it's so relaxed that if it got any more relaxed, you'd never make on or off the island.

The weather on our first day was patchy, it began with an ugly overcast day, but then eventually it got sunny. In the end it wouldn't have mattered though because Caye Caulker is all about the vibe and the people. Everyone knows everyone in this tiny island of 3 streets along and maybe 10 across, and after a couple of days there, if you're not a complete douche, you can't walk down any of those streets without running into someone you've met or a random person sparking up a conversation with you.

This is a panorama of the entire island

We spent most of the afternoon once it got sunny at the "split" which is the tiny beach where a hurricane split the island in half a few years ago. 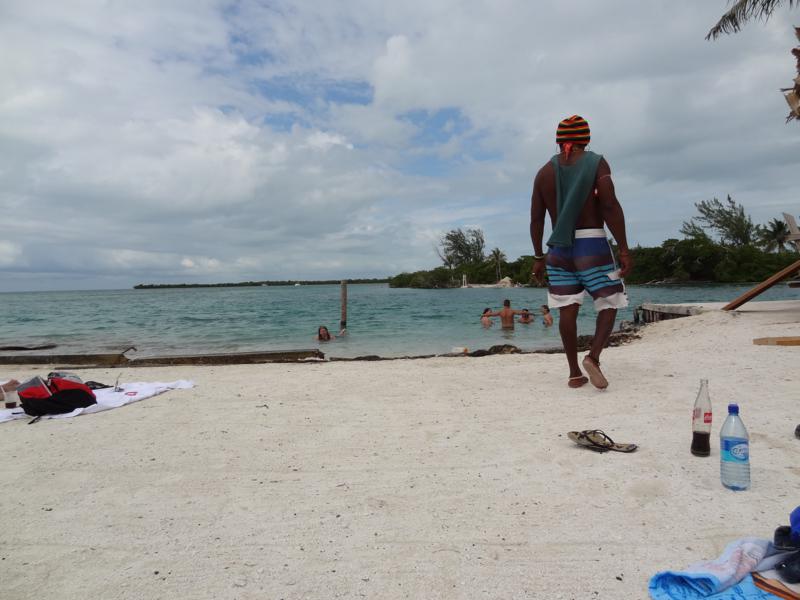 There is great little beach bar called the Lazy Lizard here where we initially met many of the people we'd be hanging out with for the rest of our stay. 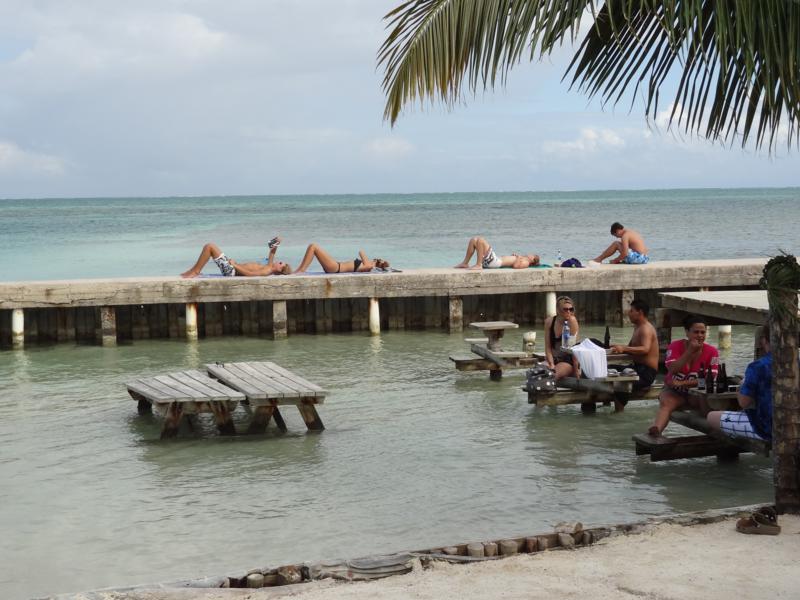 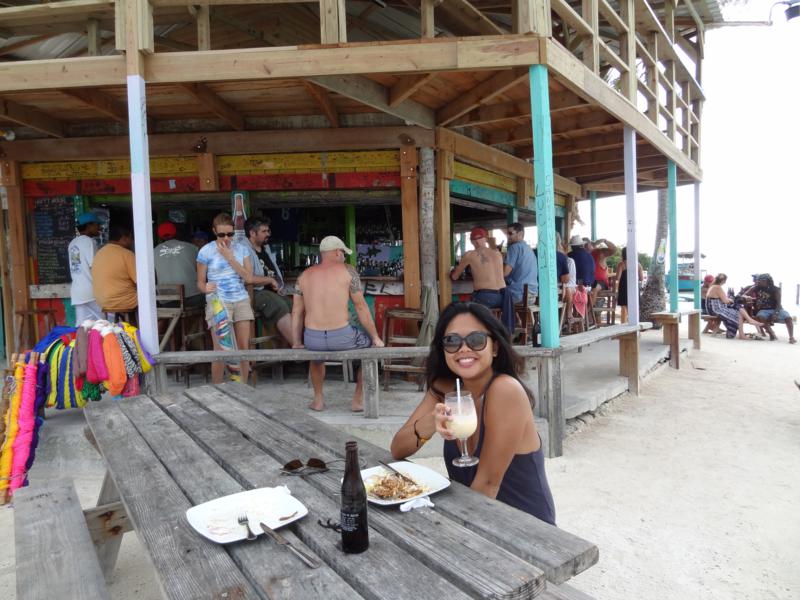 There was Wayne from Calgary. A great "young at heart" guy who is thinking about building a house here. There was Phil and his wife Abbey from Texas from whom we learned everything we would ever need to know about Austin. They also introduced us to "Wish Willy", a great island character and restaurant owner who decides on a whim who is and isn't cool enough to eat in his place. If you're a douche prepare to be kicked out no matter how much money you have. Then there was Dennis from Virginia who was an awesome source of information about Nicaragua and through pure coincidence also happened to be our snorkling buddy a couple days later.

Speaking of snorkling or diving, this is probably one of the best places to do so in the world. It's expensive, even very expensive, but it's well worth it. The cheapest point of departure in the area though is Caye Caulker so at least you know you will get a good price for the area. We decided that the "Blue Hole" is a bit too challanging a dive for us since we just got our open water licenses and we only have 3 dives each under our belts. Apparently it's unbelievable and you can see all types of sharks including hammerheads but you do have to go down to 40 meters which is way further than we've ever gone. Instead we chose to go the snorkling route and man was it worth every penny. Rather than talk about it ill show some pictures and videos, but first, the picture of the awesome underwater case for my old camera I was using to take the pics.. 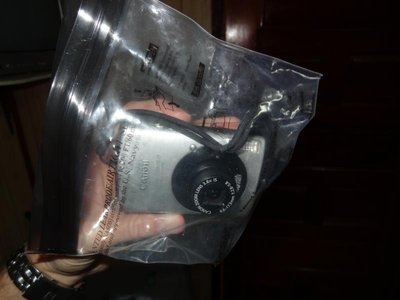 It worked like a charm until I slipped and fell in the boat and broke the camera (no, don't worry, it's not the same camera that I just replaced, it's an old backup camera that was probably ready to die anyway). Thankfully the pictures were all intact! 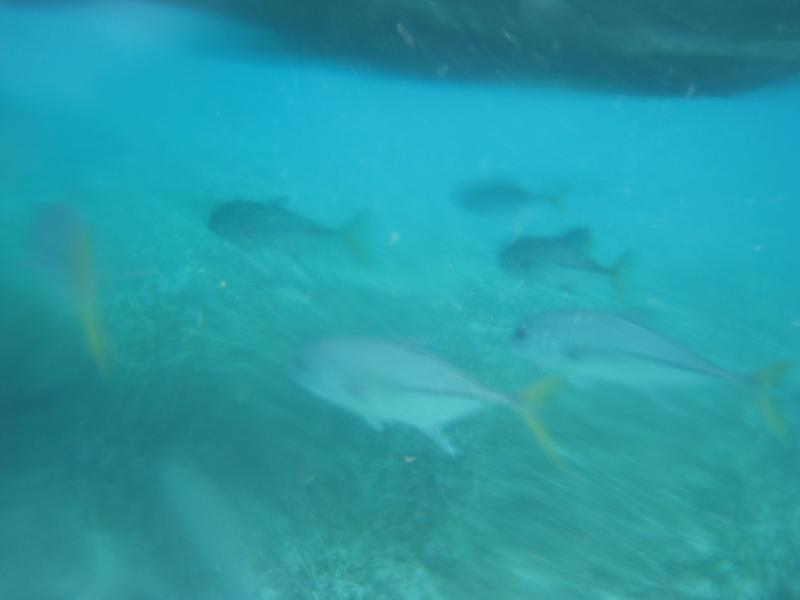 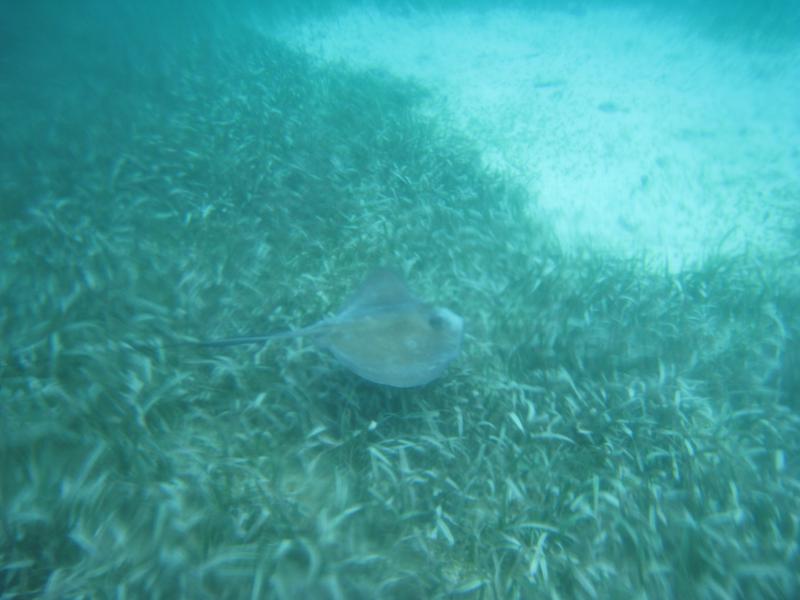 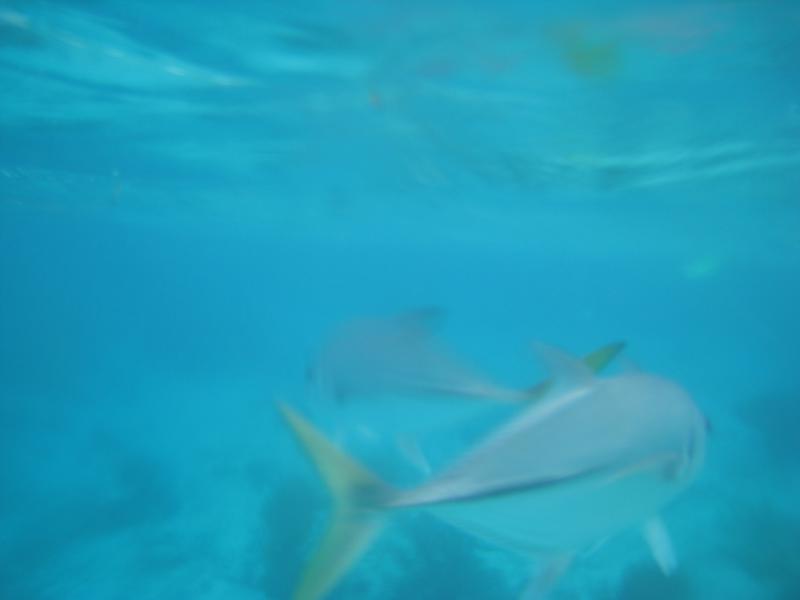 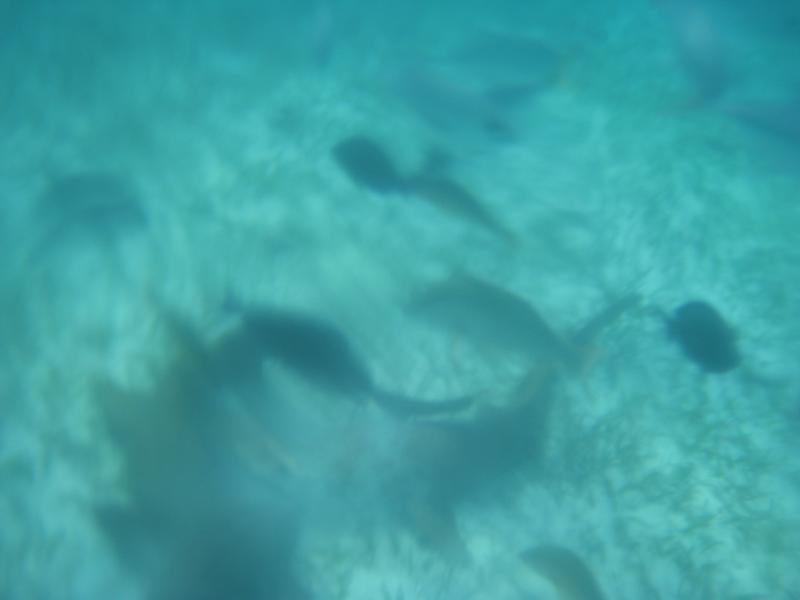 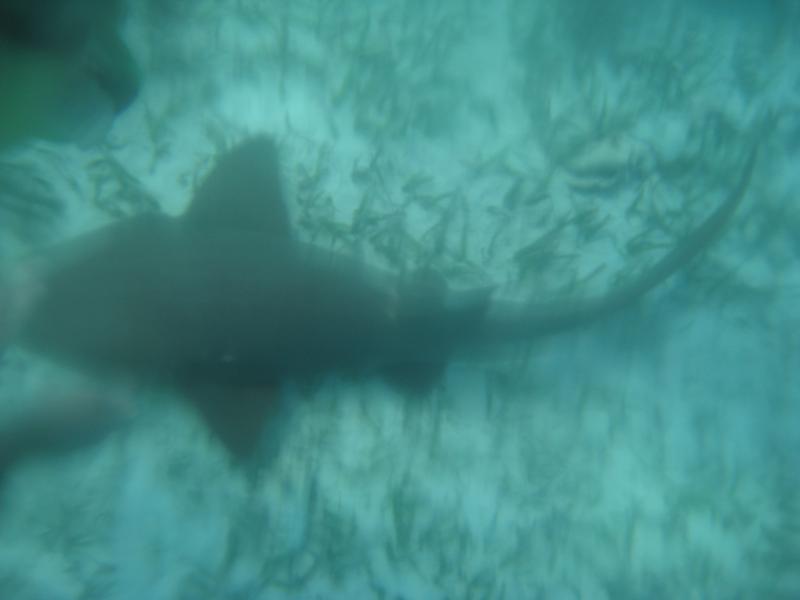 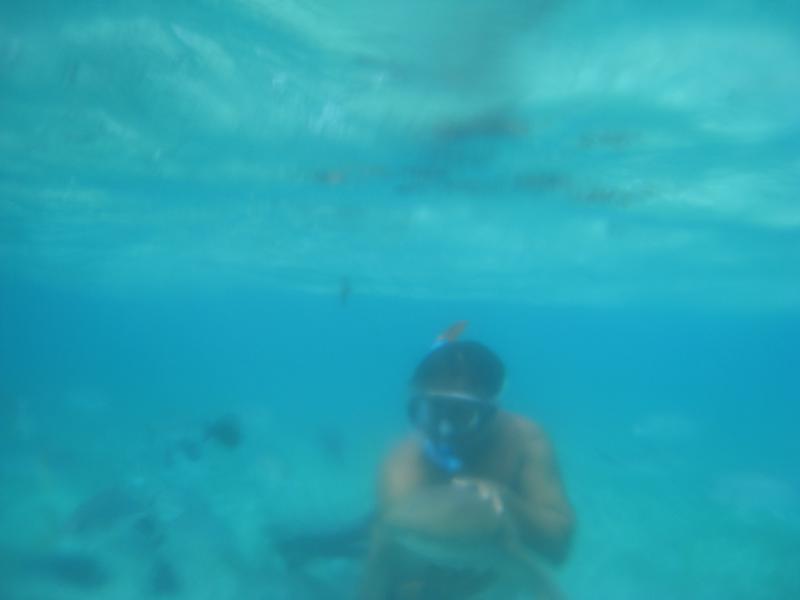 After a day of petting sharks and swimming over giant stingrays our guide Vito suggested we go to a restaurant called "Little Kitchen" for dinner. We all saw hand drawn signs for this "little kitchen" place all over the place but they always led into back alleys and other dodgy areas so we never really followed them. However emboldened by having our buddy Dennis from Virginia and our new friend Janet from Hong Kong with us, and of course Vito's recommendation, we decided to go for it. 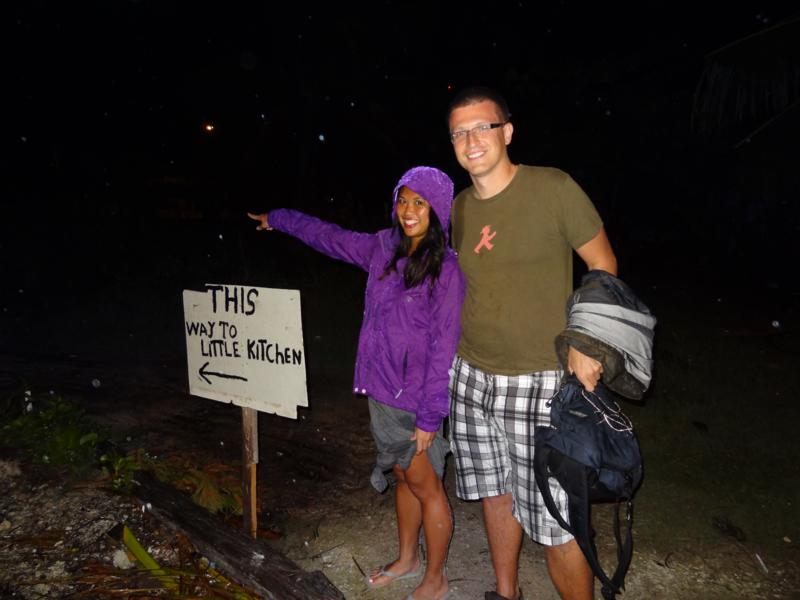 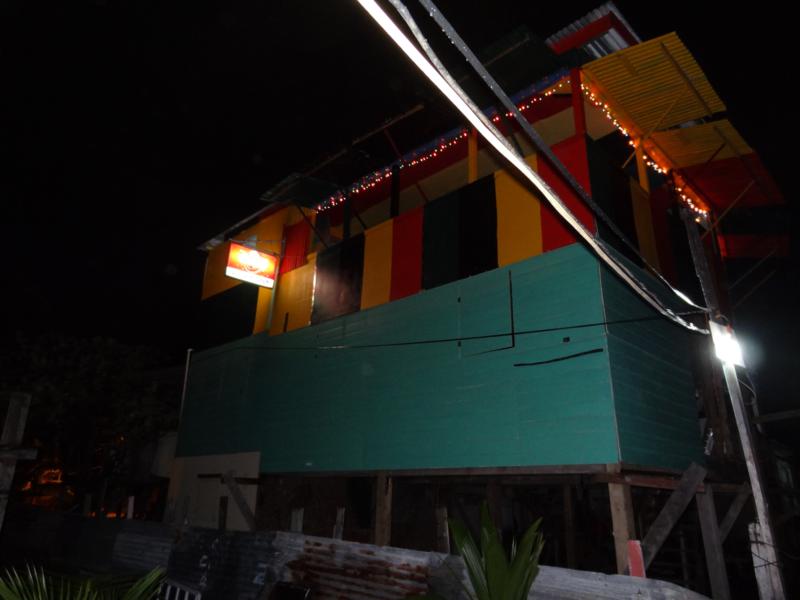 It was the best meal we had on Caye Caulker! That's saying a lot, since every place we went to was good, but the lobster tail here, which cost 10USD, was unbelievable. The 7USD Barracuda our friends had was awesome too as we all shared a bit of our food with each other and marveled at how tasty everything was. The rum punch deserves high praise too as it was a combination of many delicious fruits that made the rum very hard to detect but very potent. As if that wasn't enough our cook AND server was a super nice Belizian lady who made sure we felt welcomed and satisfied with everything. 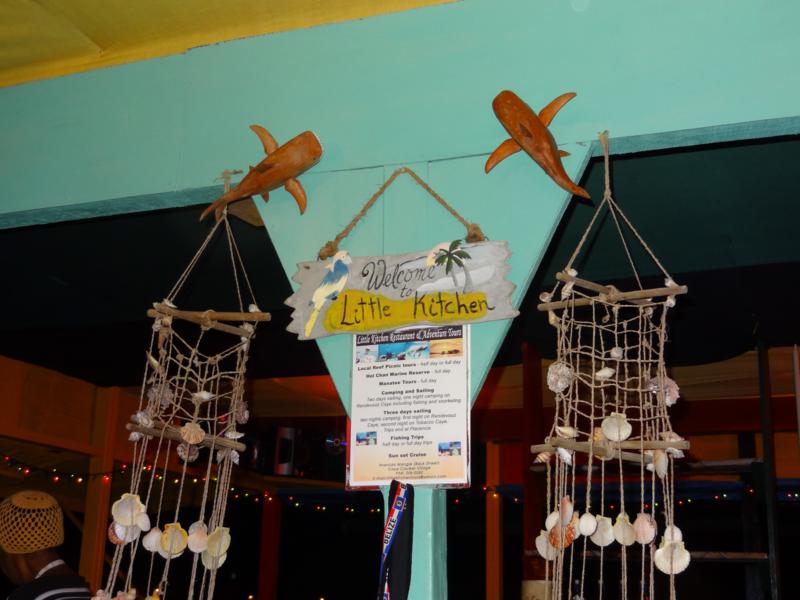 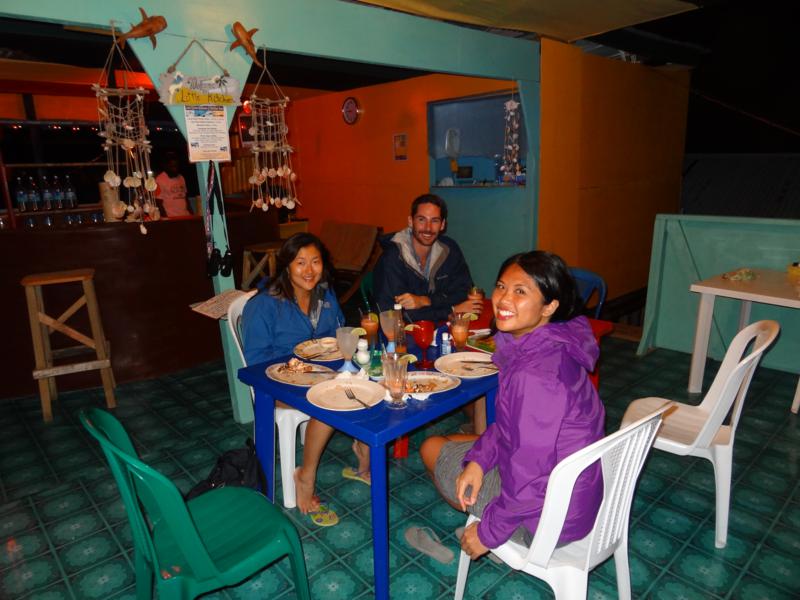 Thanks everyone in Caye Caulker for making our stay there absolutely unforgettable! We WILL be back one day!

That's the cutest shark video I've ever seen! Snorkelling is one of my fav things - never seen a shark though. Fun!

Thanks Andrea! Come to Belize and you will see lots of them