After spending New Years day in San Juan del Sur we could not wait to get out and see the rest of Nicaragua. We have heard so much about this country and how it's the great undiscovered travel destination of Central America, yet San Juan del Sur as a travel destination in itself was a disappointment. We had a good time because of the hosts and the other travelers not because of the place.

The next destination was an island described in travel books as a “fantasy” island. It is a small island on the gigantic Lago de Nicaragua (Lake Nicaragua) with two volcanoes side by side. The island was basically formed by the lava flows from the two volcanoes creating a land bridge between them thousands of years ago. The way to get there is by taking a Ferry from a place called San Jorge.

We got our host Chelly at Yajure to drive us to the Ferry. That in itself is always quite the adventure as he loves to yell “Puta” at all the crazy motorcyclists and remind everyone else on the road how they can’t really drive. He justifies it as providing “free education” to the locals. Occasionally he even speeds up to try to run over a terrified pedestrian or two. 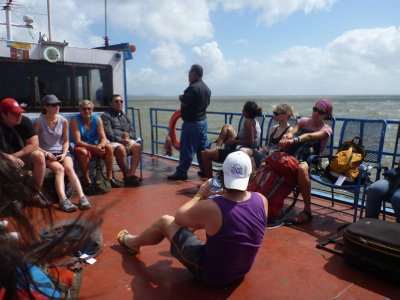 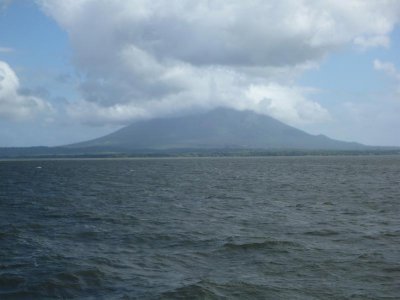 The island itself is very beautiful and the locals on it appear to be a bit friendlier then the people in San Juan del Sur. The hostel we stayed at was once again excellent with beautiful grounds covered with gorgeous wildflowers and a very relaxed atmosphere. This was exactly what we needed after the hustle and bustle of San Juan del Sur. 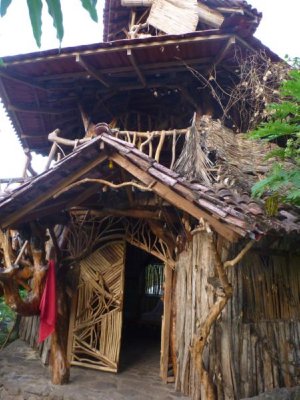 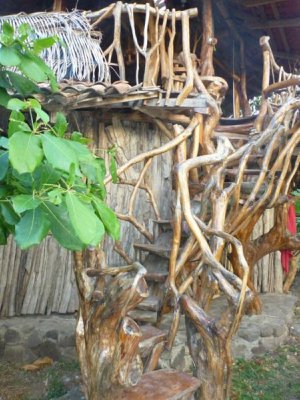 Unfortunately the tide and waves were really high and had completely drowned the beach so this was not going to a beach stay. We asked the Hostel and they set us up with a tour guide to climb the smaller Volcano on the island the next day. A simple 3 hour hike up and 3 hour hike down, with a beautiful little lake in the crater at the top to reward our effort, or so we were told. The warning bells should have started ringing though because it seemed no one at the hostel had ever actually done this hike.

The trek up the Volcano started out innocently enough, however, the fact that the trail appeared to go through private property and farms should have been a warning. We took some nice pictures prior to entering the forest and proceeded with the actual hike. 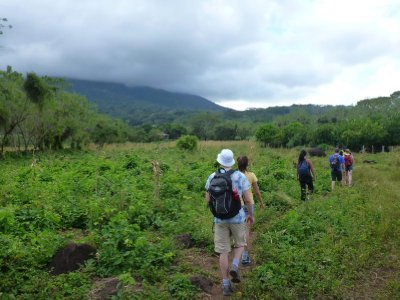 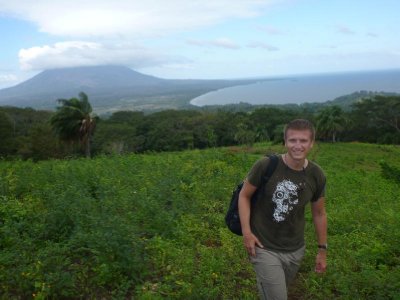 It quickly became obvious that the word “trail” is used extremely loosely in Nicaragua. This was more a path beaten out by the tourists walking up and down than any sort of actual trail. There was mud half way up to our knees spread out across rocks while climbing some ridiculous inclines. The guide stayed back with some slower hikers to help them so we were on our own. The trail just kept getting worse and it would literally completely disappear at times, so we had to figure out ourselves which tree trunk to jump and which ant hill to go around to find it again. This was no pleasant 3 hour hike, it was more of a 4 and a half hour torturous sludge through some really difficult terrain. There were also no views at all while climbing just dense jungle and cloud forest. 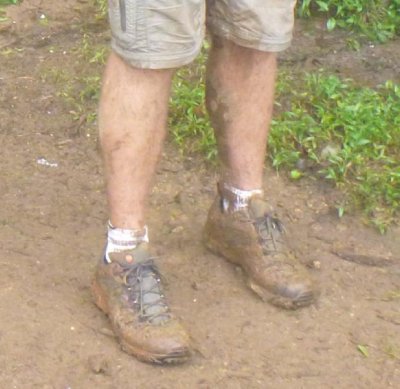 The worst part however came at the end. We got to a tiny clearing maybe 10 feet by 10 feet and the guide announced “You’re here!”. No view at ALL! It’s all just trees around us and the tiny clearing. We all couldn’t believe it. There is still a chance though! There is the climb into the crater and the beautiful lake right? Yes, says the guide, but it’s another 15 minute hike down and then back up. Screw it, at this point, might as well go down and try to salvage a bit of this experience. The way down to the lake is even worse than the climb since you literally have to jump down from ledges into the mud below and pray and hope you don’t slide down and break your leg. And how exactly would anyone get you out of there if you did break your leg? I'm guessing they would just roll you down the side of the Volcano since you were a goner anyway. Finally, the lake itself? The payoff at the end of the 5 hour torture? The picture below says it all. 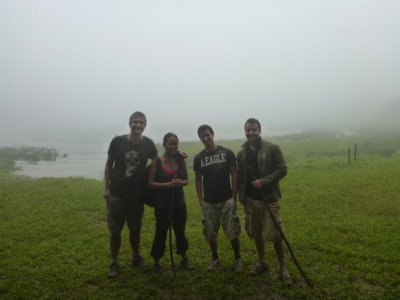 The lake is more of a muddy puddle. I got something out of the experience for sure but once more it had nothing to do with the location itself. It was more of a personal achievement feeling that I actually made it up and down that path alive. I might as well have climbed a mountain in Quebec or Virginia.