The boat was small and cramped, but we were happy to be on.

Or should we be?

The waves were huge and boat was going quite slowly. It turns out that our boat was some type of "pump boat". Being on boat rides in the Philippines, I thought that this was completely normal.

Chad, Patrick, and Derek were completely freaked out.

"There was a tiny dark hole in the middle of the boat deck where a hefty guy, who took up the entire opening, was sitting with just his head slightly sticking out, watching a number of gauges. To the left of this guy there was what looked like a long exhaust pipe sticking out and a piece of wood wedged into it. There was another skinnier guy up on the deck, who probably weighed not much more than my backpack, who kept plunging the piece of wood into the exhaust pipe causing water to come out through the exhaust pipe and onto the deck. My best guess is that the engine down below was being flooded with water so it had to be constantly purged in order for it not to stall. 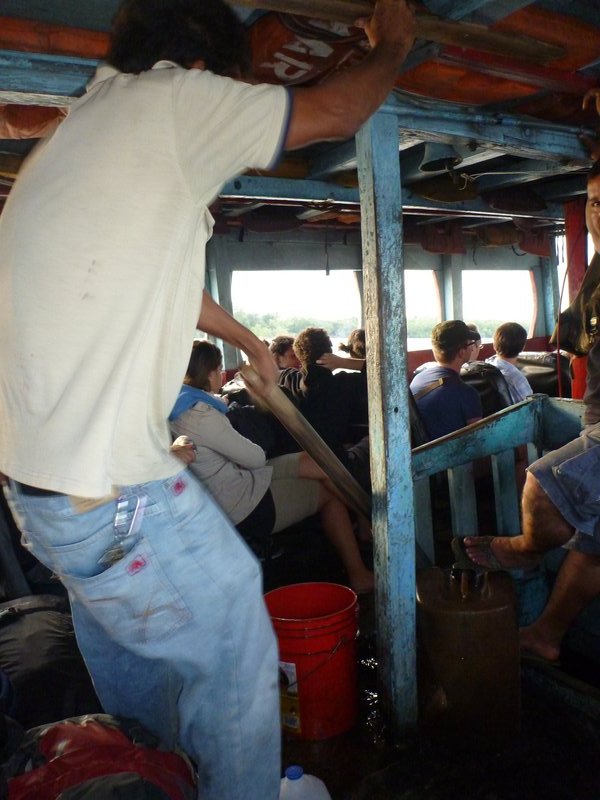 There was one scary moment when the exhaust pipe appeared to disconnect from the engine and the two guys started frantically trying to reconnect it. The engine started to struggle and sound like it was starting to cough which made the two guys work even faster. Luckily they did eventually manage to fit the pipe in again and the amount of water that started pouring out as they resumed pumping suggested we probably only had a minute or two left before we'd have to be towed to shore by the giant sinking ferry behind us."

I was knocked out by Gravol. I had no idea this was all happening.

When we got to shore, there was no room for our boat to dock. Instead, the boat parked next to another boat but this did not mean we had a direct walkway onto the dock.

Meanwhile, a local man jumped out of our boat and frantically started swimming away from the boat. Well, what the heck was THAT supposed to mean? Did we all have something to be worried about and need to jump out of the boat too?? Since nobody else seemed to be worried, we stayed on the boat. Until this day, we haven't figured out why the guy jumped out and started swimming like crazy. Maybe he wanted to swim.. who knows.

To get off our boat, we had to climb to the top of our boat with our backpacks and jump onto the top of ANOTHER boat so that we could walk off.

"Since Kristine gets sea sick during regular boat rides and we just made it through 3 meter swells I thought I'd better carry both mine and her backpack. My backpack weighs around 40kg and hers around 30kg, so in total on both shoulders, I had around 70kg as I started jumping from boat to boat trying to reach the shore. I felt reasonably safe as I always had something to hold on to with my arms as I was making my way down right up until the last boat. The way from the last boat down to the ground was a narrow plank with no safety barriers on either side that would be difficult for a tight rope walker to make it down. I stopped in front of the plank and considered my options ignoring the growing yelling from the Nicaraguans to hurry up. Who were they to tell me to hurry up when they NEVER do anything even remotely quickly or on time. I figured if I tried to make it down the plank with one backpack 10kg heavier than the other and my knees still feeling funny from the boat ride I would end up in the water for sure. I turned around and, despite the yelling the protesting of everyone who I assume was HOPING I'd fall in so they would have a funny gringo story to tell. I gave Kristine her backpack back. We made it down the plank and onto the ground but it was not quite time to celebrate yet."

After a quick cab negotiation, we squeezed 4 people into the back of a tiny cab. Derek sat in the front and took this picture: 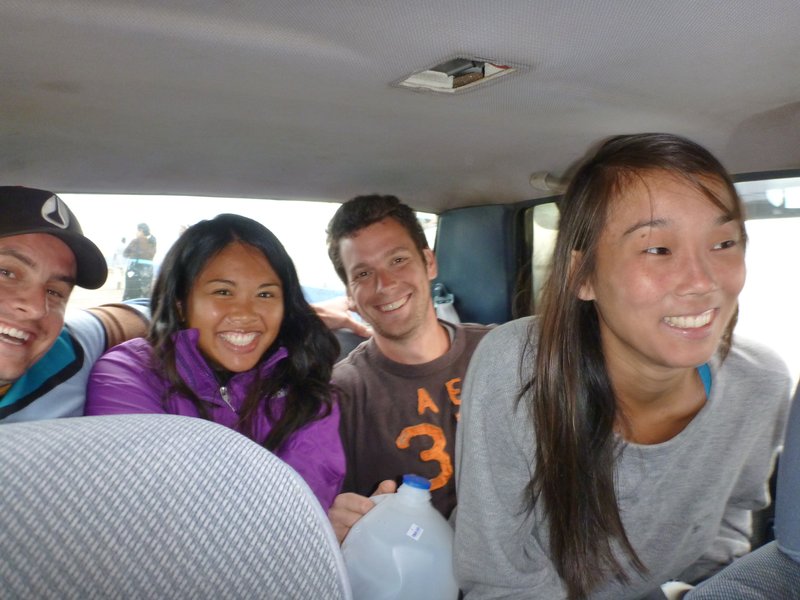 Alexandra was sick during most of her stay in Nicaragua. This was the HAPPIEST we have seen her the entire trip! We took the cab to the Nicaragua/Costa Rica border, crossed over to Costa Rica by foot, and never looked back.

Posted by krisses 06:51 Archived in Nicaragua

Great experience !!! After all is was all fun !!