At 2850m above sea level, it was exciting to land in Quito by plane because you can see the plane’s runway land just short of a mountain’s edge. When you get off the plane, you realize you are at the same level as the clouds. And as you take your first steps, you test your level of acclimatization to altitude. Fortunately, I fared well!

We were fortunate to stay in the Secret Garden hostel in Quito that boasted having the best views in town – and they didn’t disappoint! Here’s our view during breakfast, and during the nightly “campfire in a wheelbarrow” after dark: 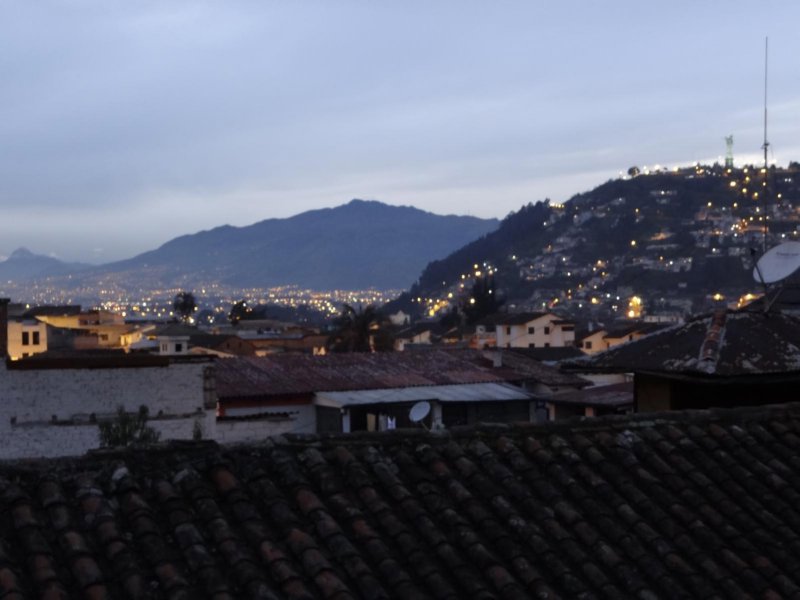 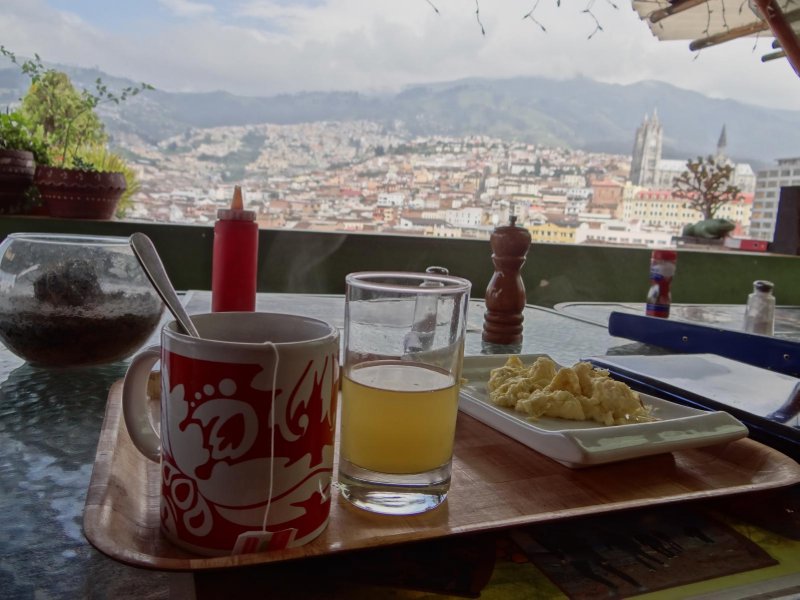 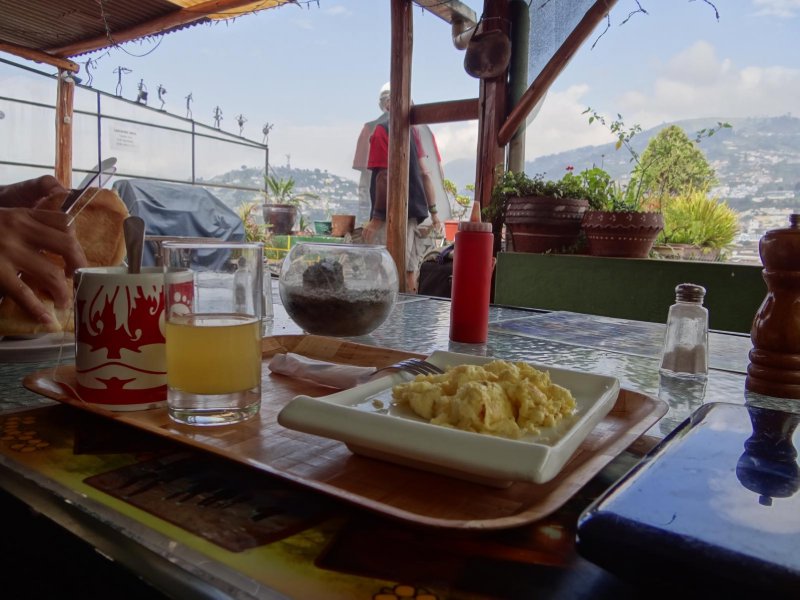 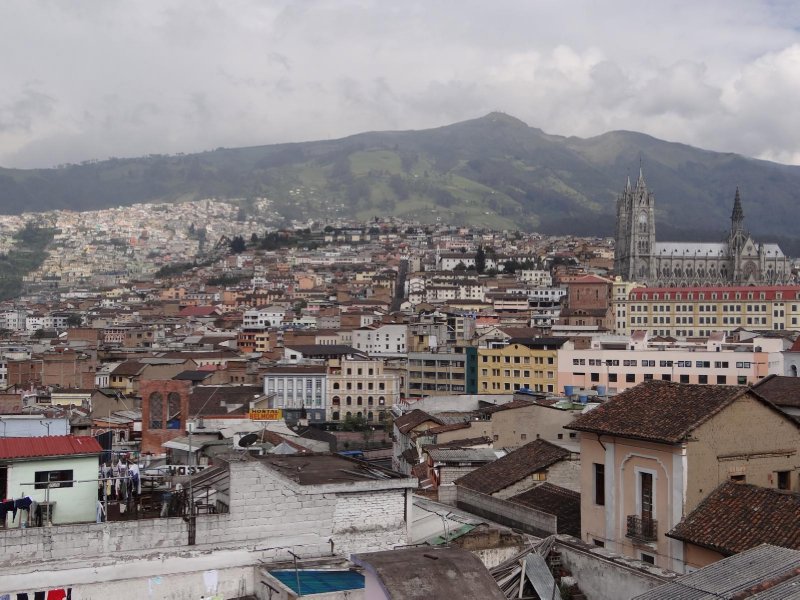 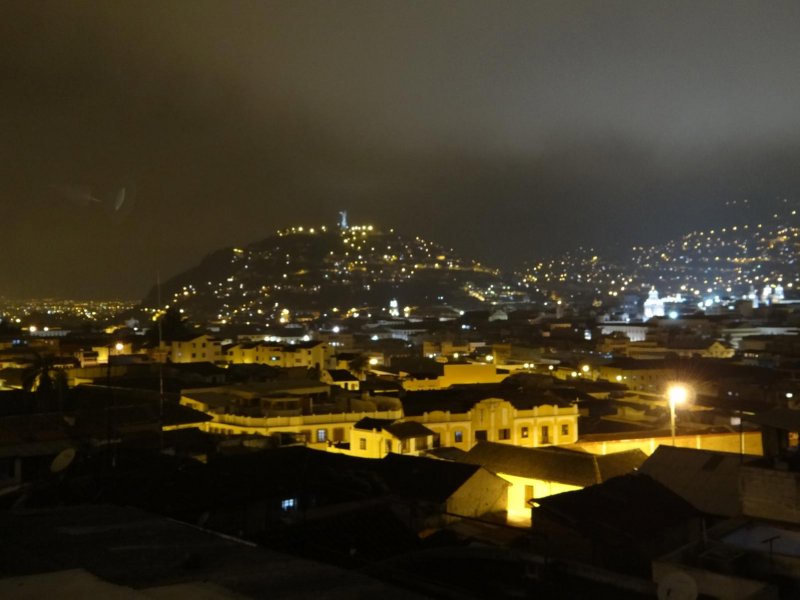 Aside from the Galapagos Islands, Ecuador’s claim to fame is its location along the equator. The Mitad Del Mundo is a super touristy area that was supposed to indicate a latitude of 0 00’ on the equator. For those who do their research, you can find out whether this is actually true or not! However, here we are having fun with “the middle of the world”: 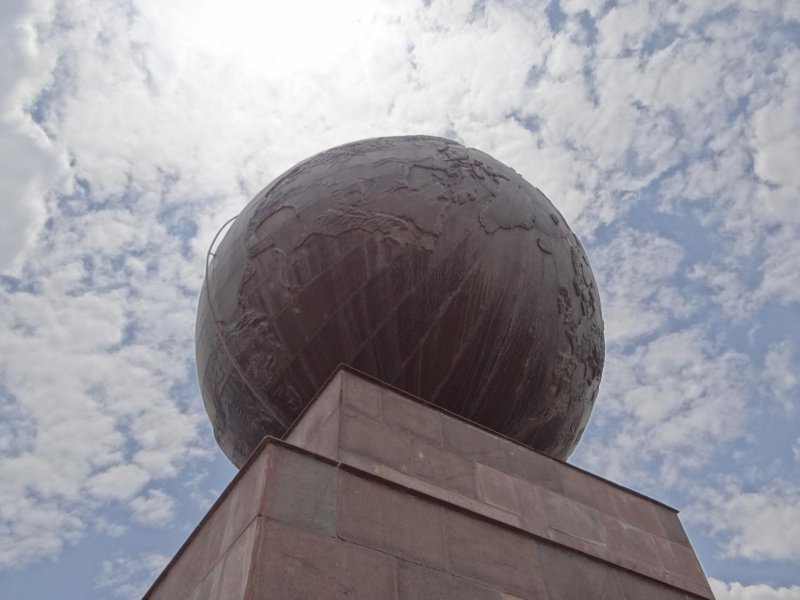 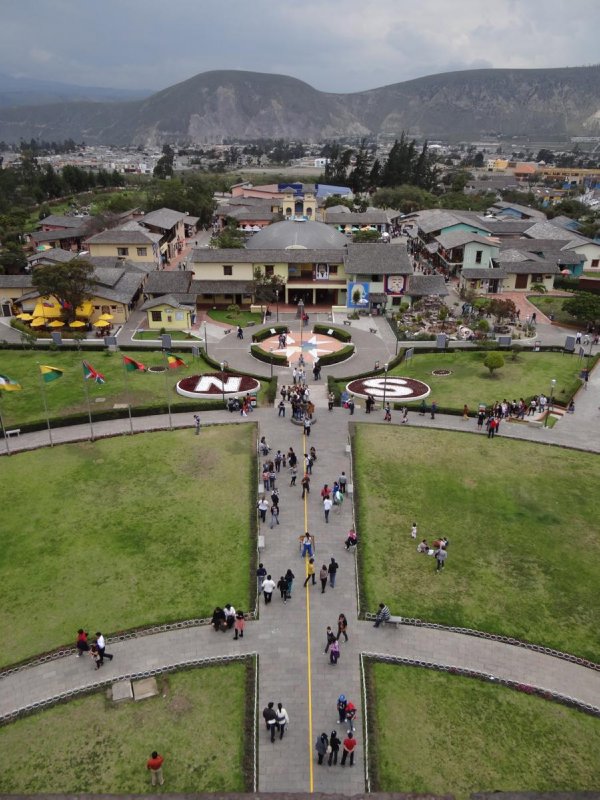 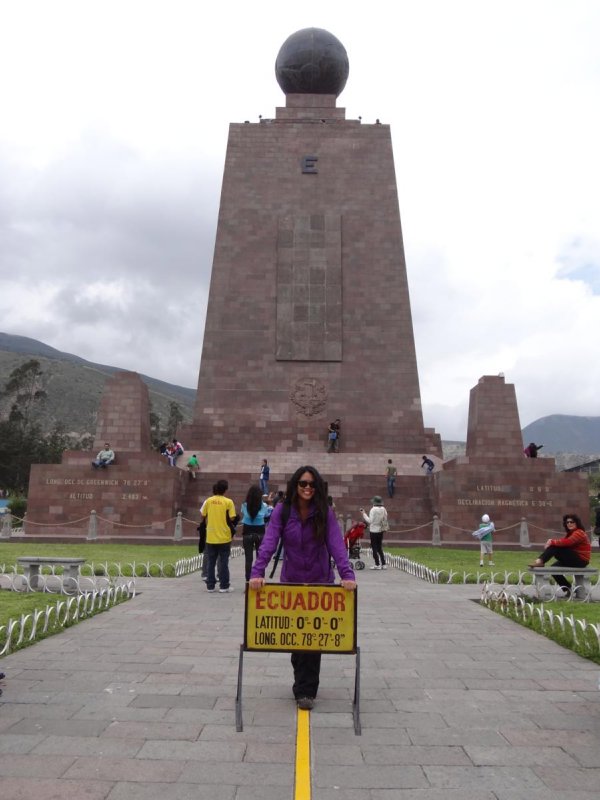 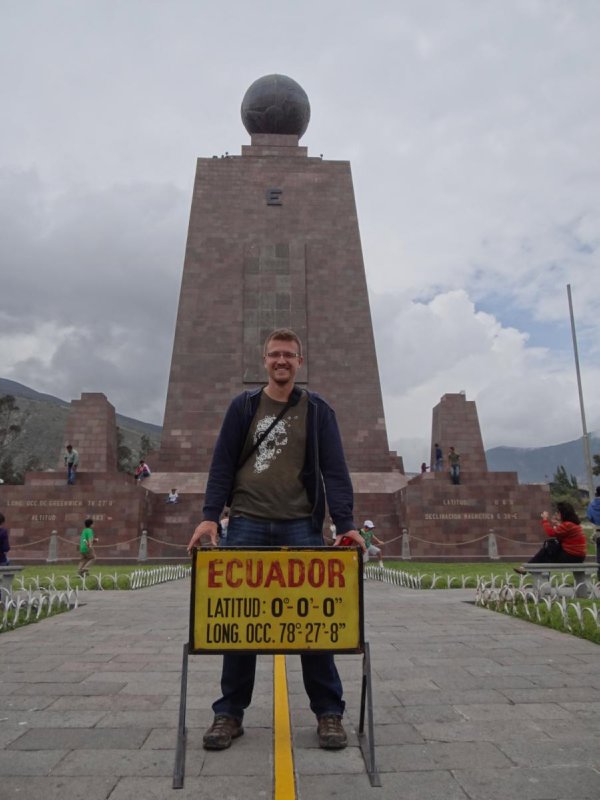 Ecuador has their own version of Carnaval that involves throwing water balloons, wiping colored powder on other people’s faces, and spraying colourful foam at giggling passersby. Through a tiny window while on a moving bus, Derek was hit by a water balloon (mad skillz!) While we were visiting Mitad del Mundo, a live band played local favourites as people of all ages danced and sprayed each other with foam. We were skilfully attacked by a tiny elderly lady armed with a large canister of foam. She laughed and shrieked hysterically as she waddled away to assault more unknowing victims. Here’s a taste of some of the action: 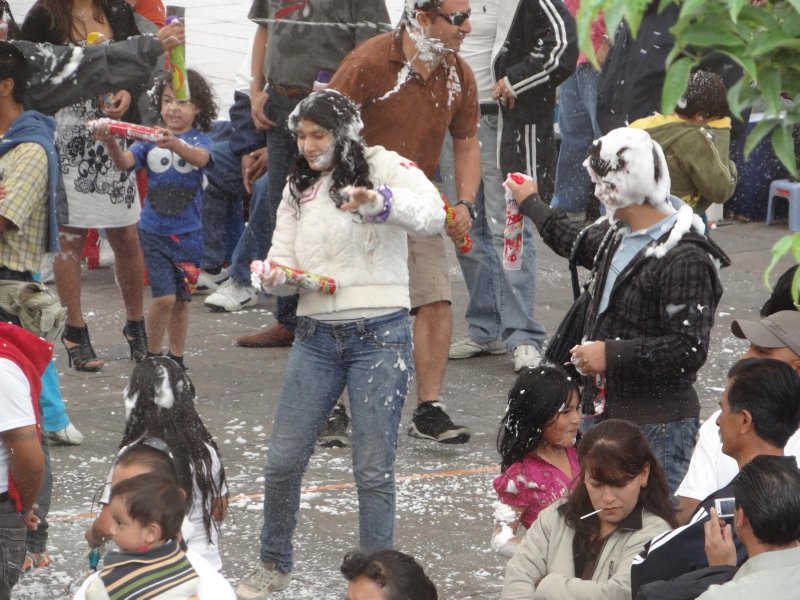 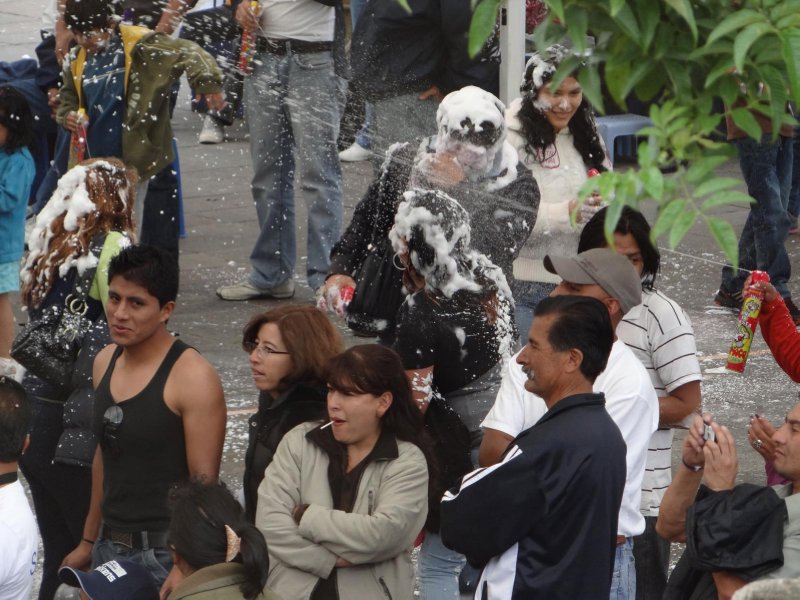 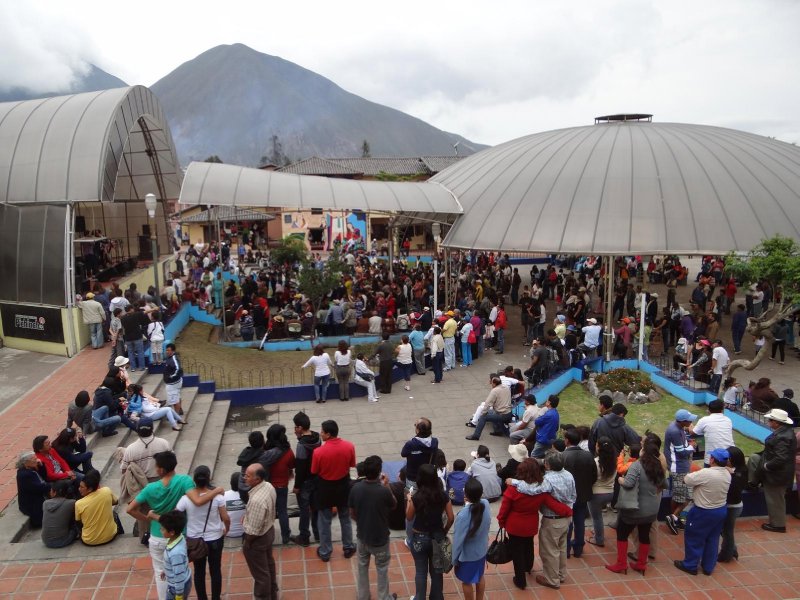 Carnaval in Quito continued until the night of Shrove Tuesday. To participate in the fun, we set out for La Ronda in the Old Town of Quito. We absolutely loved La Ronda because of its picturesque charm and friendly locals. We sat down in a quaint local restaurant and were given a complimentary canelazo (a deeeelicious combination of warm rum with sugar, cinnamon, and citrus juice that I absolutely NEED the recipe to!)

While sipping our deeeeelicious canelazo, we amused ourselves by watching the intensifying foam fights on the streets. We had to join in. Armed with a tiny canister of foam each, we took to the streets giggling and laughing at children, elderly people, and parents fighting us with their canisters of foam. When the foam fighting was at its peak, Derek bought a large canister of foam and entered the street.

Half the street stopped and watched the giant gringo shake his canister of foam. That same half of the street laughed and shrieked into a crescendo that I translated as “LET’S GET THE SUPER HUGE WHITE GUY!!” 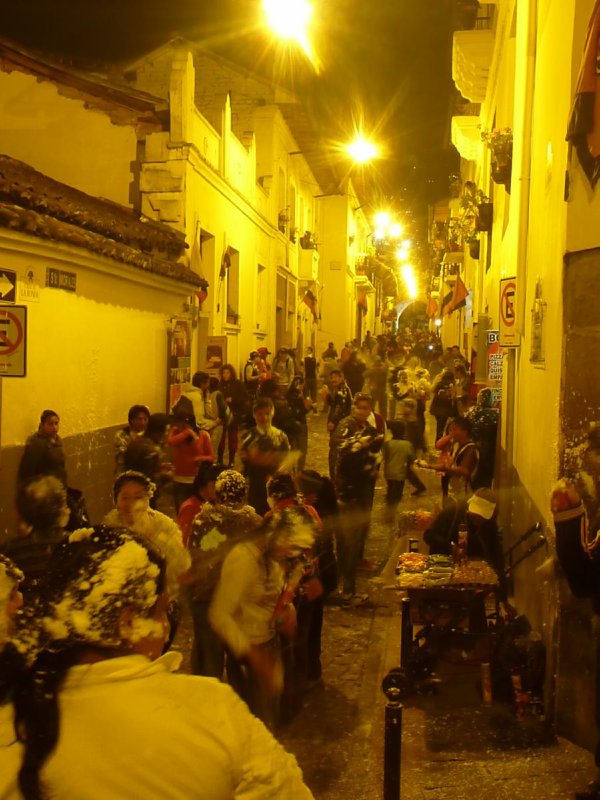 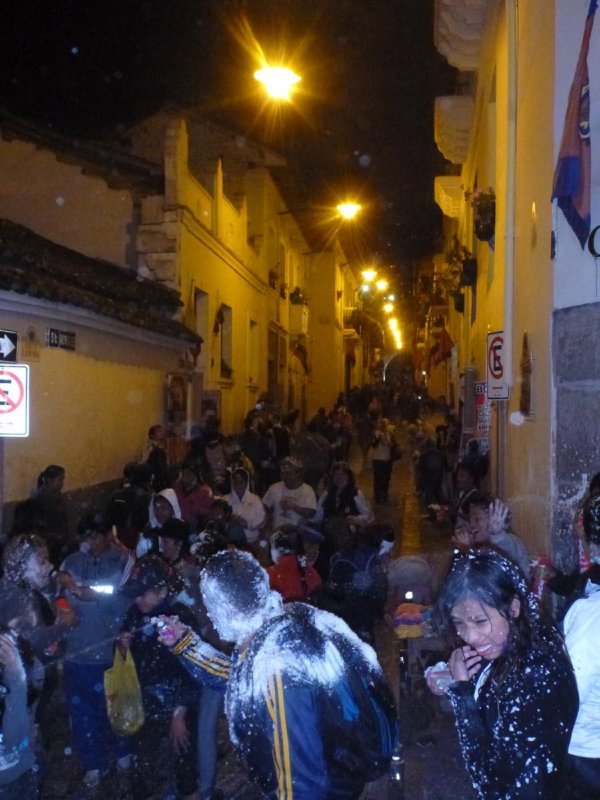 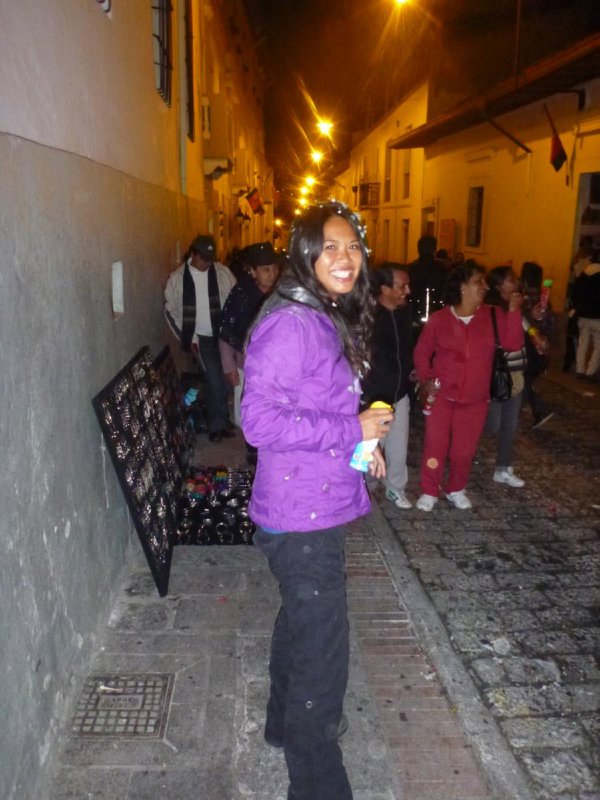 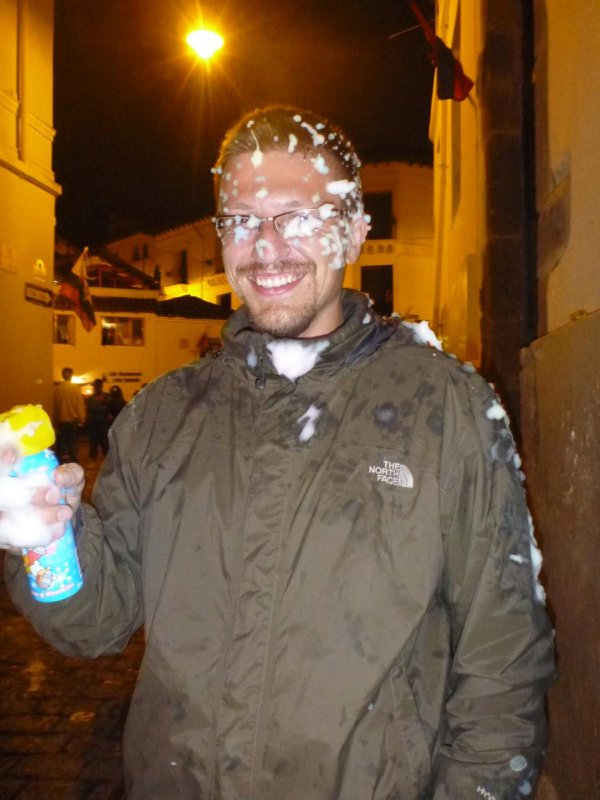 Derek didn’t have a chance. By the end of it he looked like the stay-puffed-marshmallow-man from Ghostbusters. Unfortunately, we were both so foamed up we couldn’t get the camera and take a picture of our foamy defeat.
The best part of that entire fight was while Derek attempted to wipe the 10 cm of foam that covered his glasses, someone yelled out in English, “WELCOME TO ECUADOR!”. 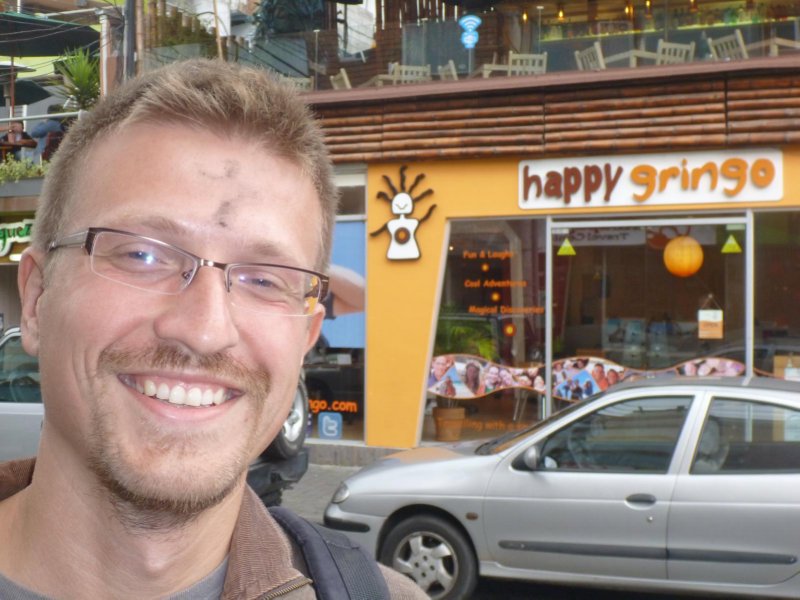 Posted by krisses 08:47 Archived in Ecuador