An amazing trek for seeing authentic Indigenous culture in Ecuador

These days there are very few places in this world that remain relatively uninfluenced by western culture. Wherever we go its remarkable to see how similar the customs and day-to-day lives of regular people have become. I don’t mean to say that there aren’t any differences, there are tons, but the basic outline, the sketches of their lives are very similar to our own. I mean DirectTV is everywhere, as are Cinemas, malls where teenagers hang out with their friends, grocery stores, department stores and even the movies played on buses are mostly American. It’s a good thing in many ways since people all over the world strive for the comfortable life we live and many of them are now achieving it.

However, as a selfish traveler, I want to see a bit more of the traditional ways of life. I want to see the Indigenous people dressed in their traditional outfits working their land. I want to see the milk truck make its run through remote villages and farms picking up buckets of fresh milk and delivering them to a small town on the other side of a 5000 meter high pass. I want to see children laughingly make their way home from school dressed in the cutest traditional dresses crossing canyons that make hardened trekkers queasy. If you are a traveller who loves to not only observe but also immerse yourself in completely different cultures then you absolutely need to come to Ecuador and the trip you have to do is the 4 day hike around the Quilotoa Loop.

As far as hikes go this is one of the best ones we’ve ever done. We set out from Lacatunga early in the morning to Zumbahua by bus with our group of 4 adventurers. We joined forces with Joanna, a polish girl from New Zealand, and S.A.M an American guy from [***censored***]. We did the loop clockwise rather than the usual counter clockwise direction recommended because we heard it’s a bit less climbing and decided that was a good thing. We first met S.A.M in Colombia as he was on his way to Venezuela to [*** censored ***]. We learned that he has lots of experience in trekking from being in the US military and speaks perfect Spanish which would both be great assets on our trip. We also learned he likes to chase armed people for fun and once spent an entire month in a forest in freezing cold weather with nothing to survive on except what was around him. This is as much as I’ll write about that because I don’t want to hear any helicopters landing on top of the hostel because we know too much.

The first leg of the actual trek was about 5 hours walking down a paved road from Zumbahua to Quilotoa, which is where the amazing crater lake from which the loop and the city takes its name is located. The walk was pretty but the best part about it was the fact that we walked by a school just as classes were done for the day. The kids, dressed in their traditional clothing, surrounded us and were all introducing themselves. They were so curious to find out where we were from and decided to walk us all the way to town. We felt like a bit like a walking school bus. They wanted to know more about the countries we were from so S.A.M pointed at me and told the kids the reason Canadians are so tall is because they eat children. So there you go, that is the now the rumour going around Ecuador, though thankfully I don’t think the kids believed him. As the kids started running off to the sides going back to their homes all of a sudden one of the girls waved goodbye to us and disappeared into the canyon. It was a very steep canyon so I asked one of the boys where the girls home was. He pointed to a small dot on the other side of the canyon and said “that’s her home!” in Spanish of course. It was all an amazing cultural experience. 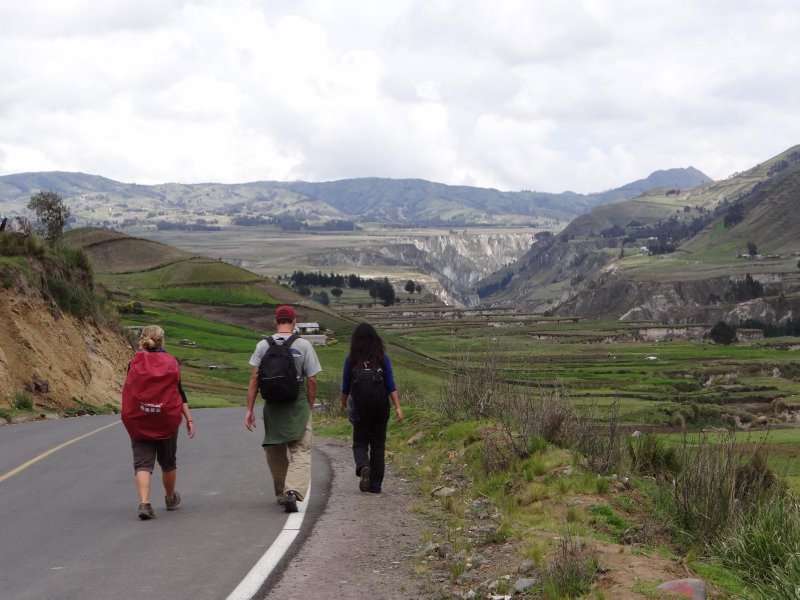 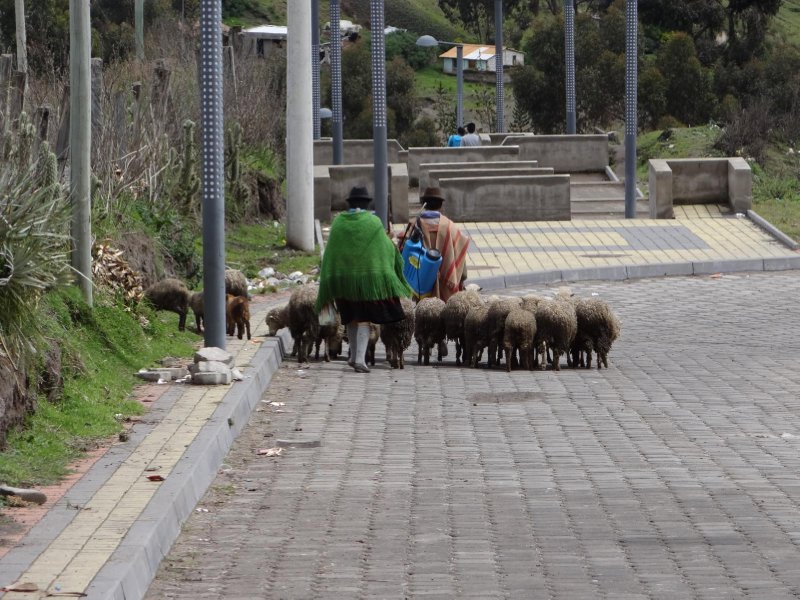 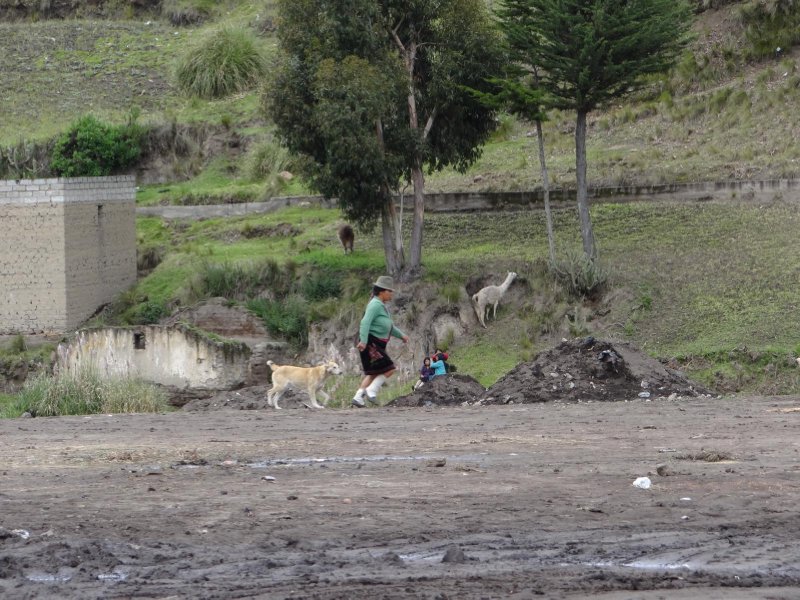 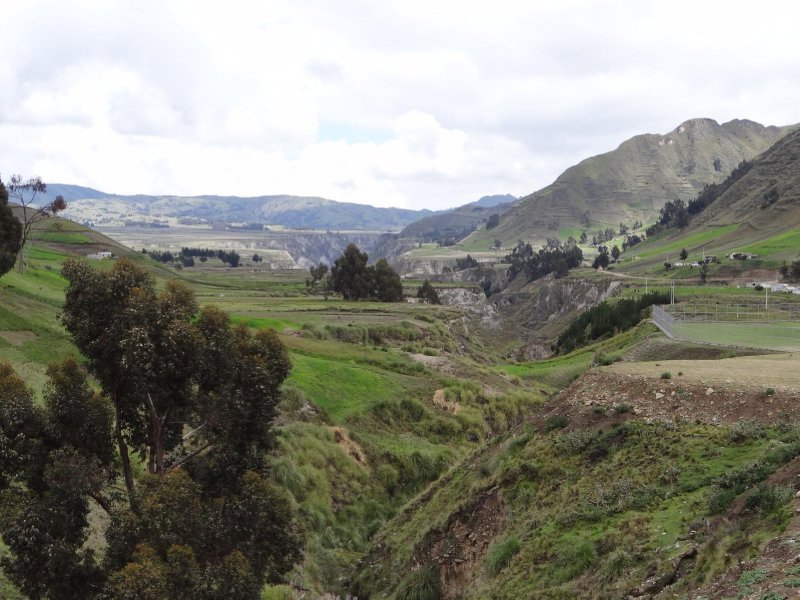 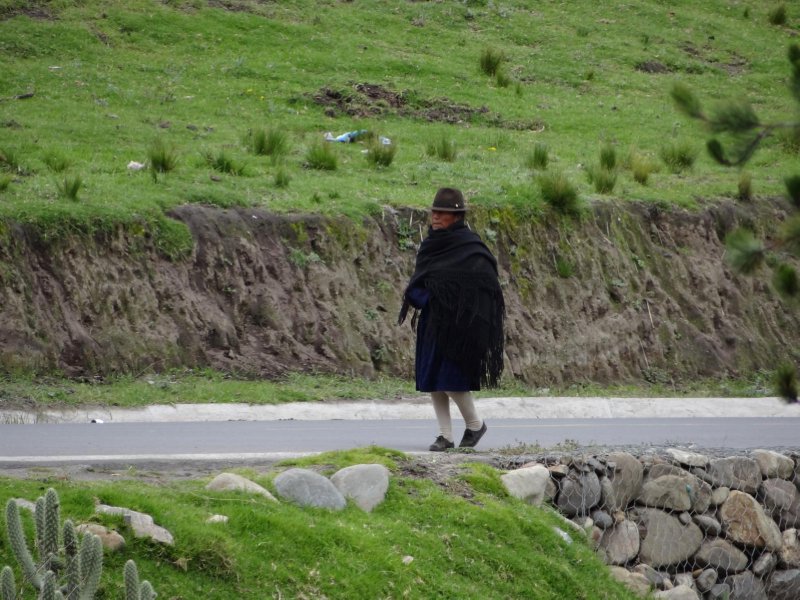 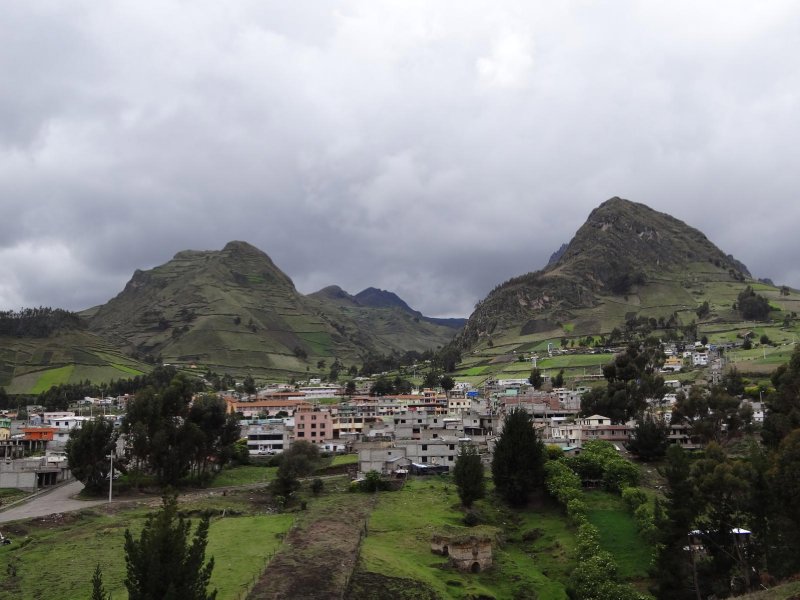 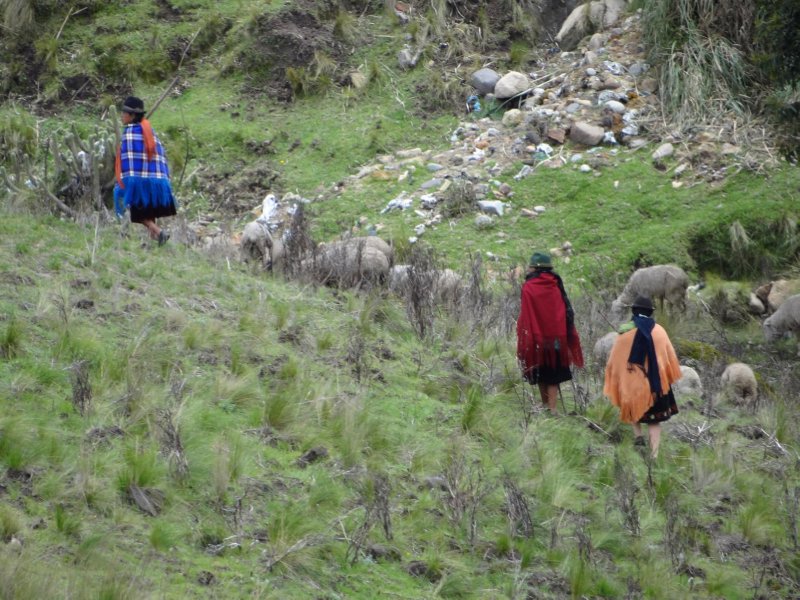 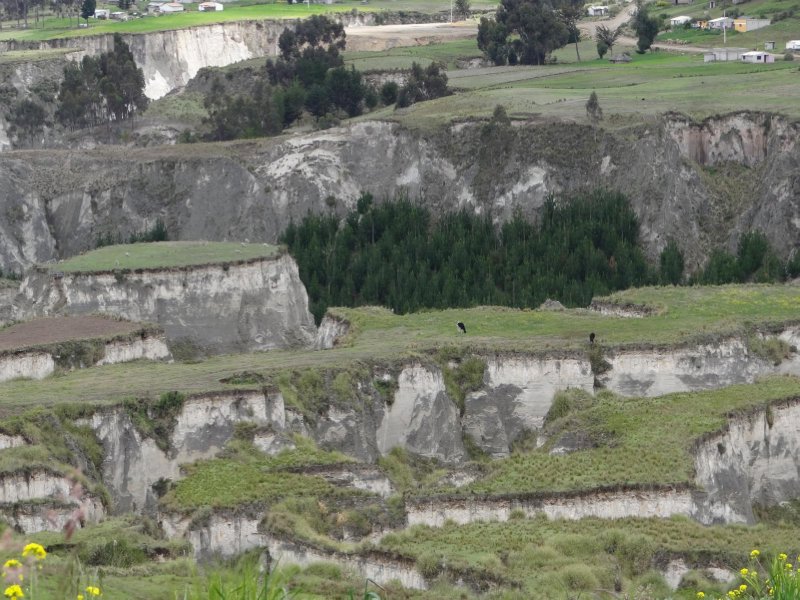 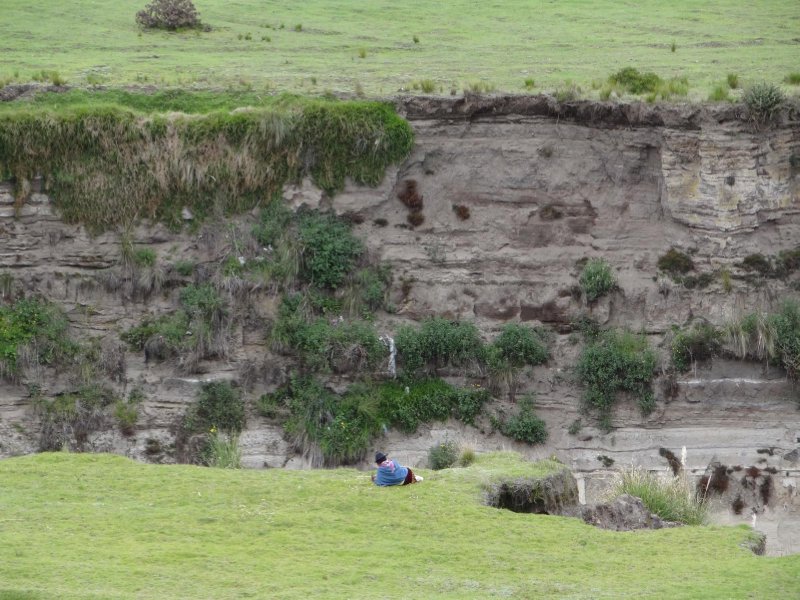 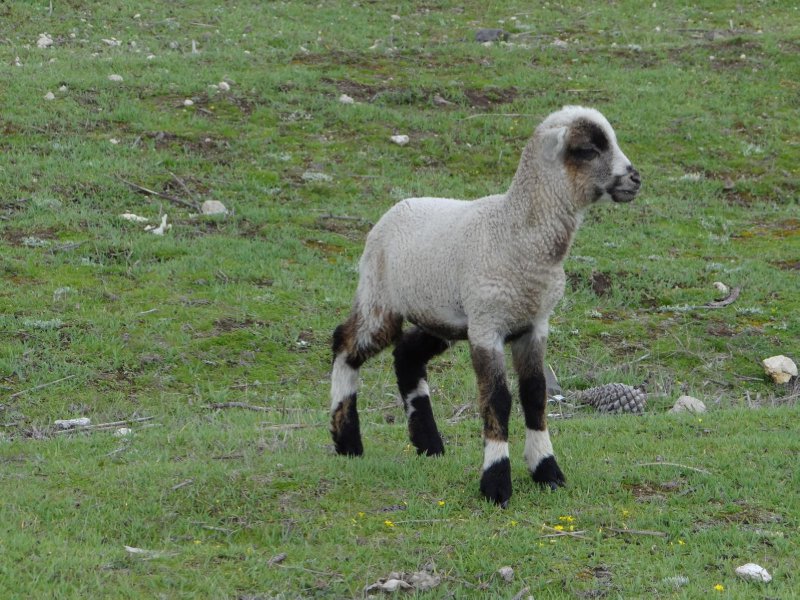 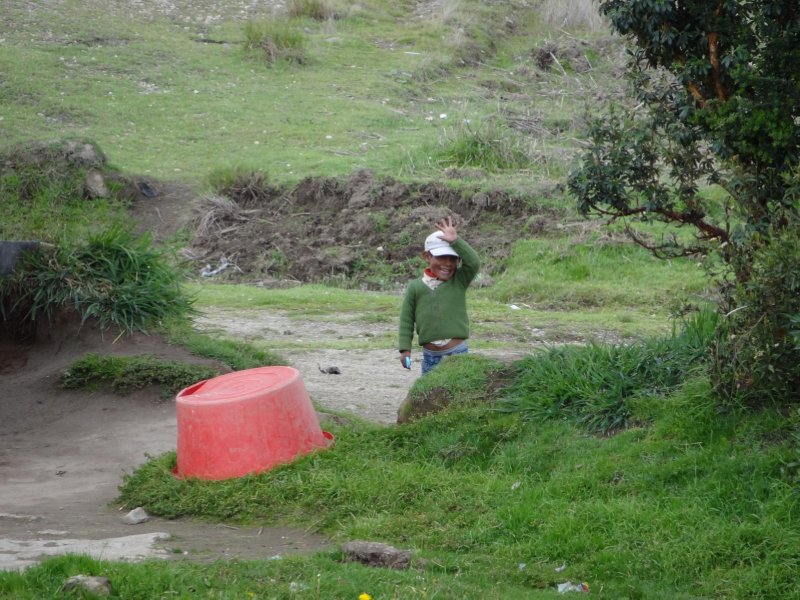 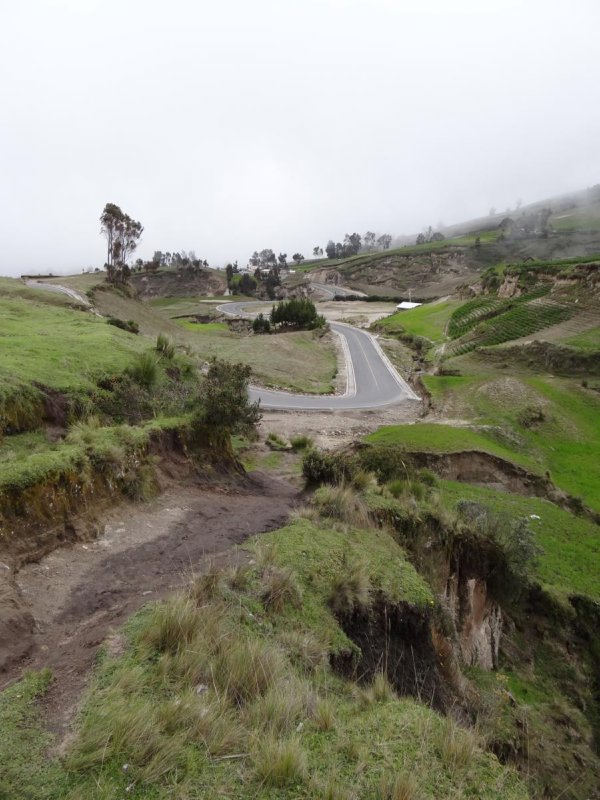 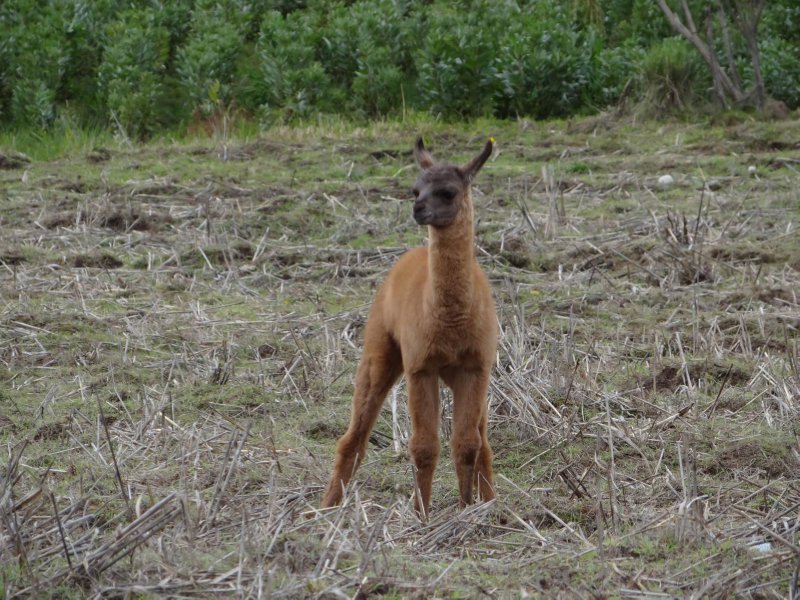 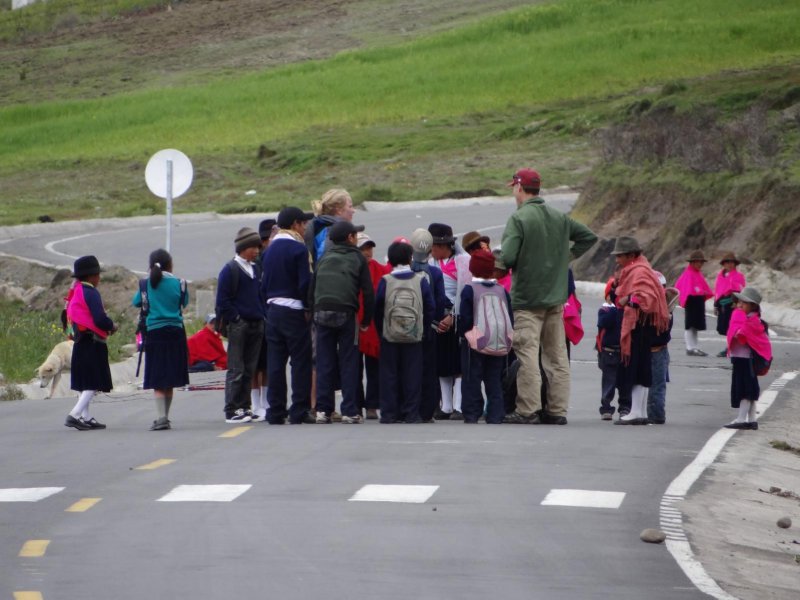 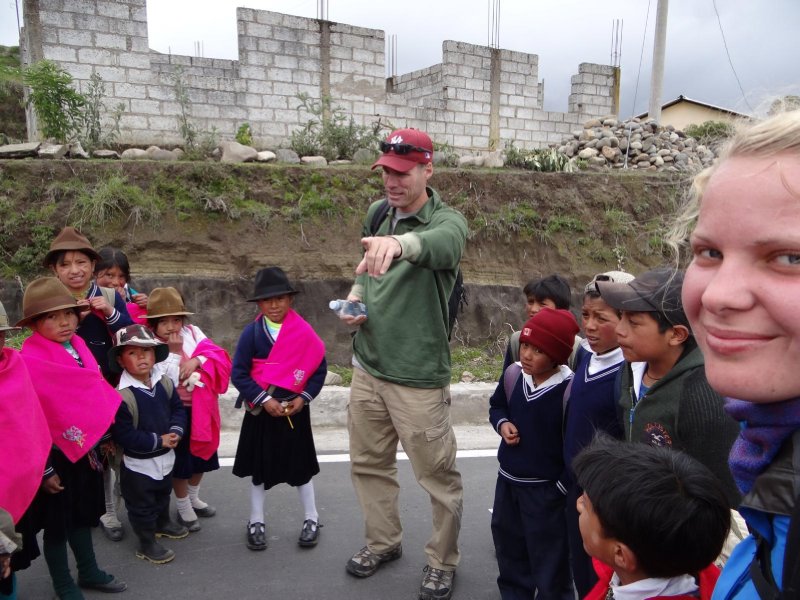 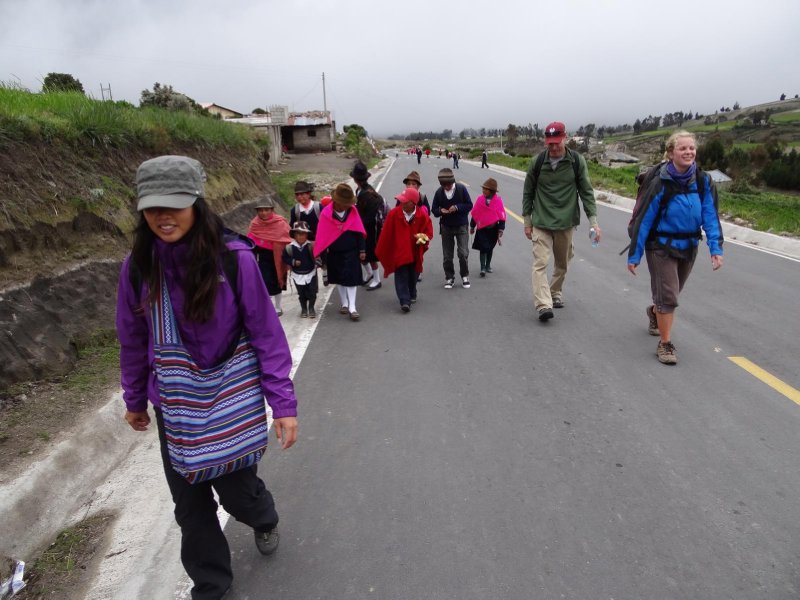 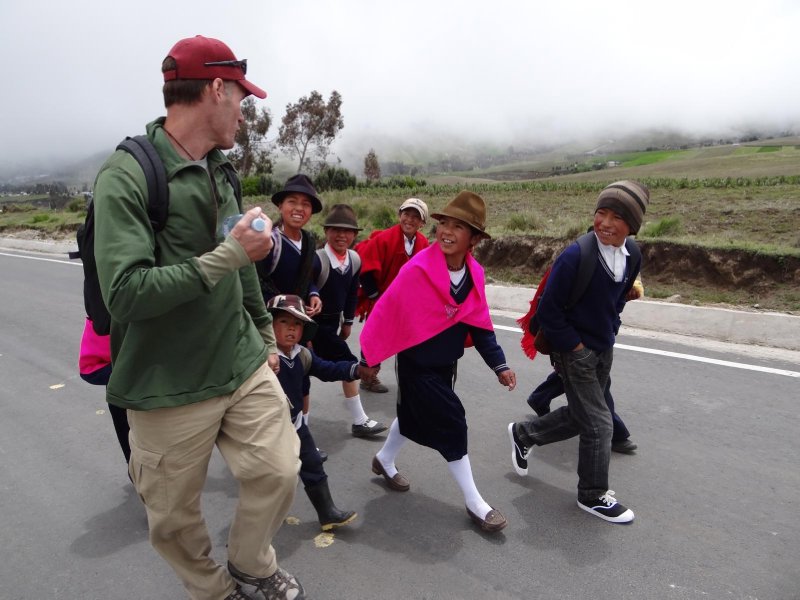 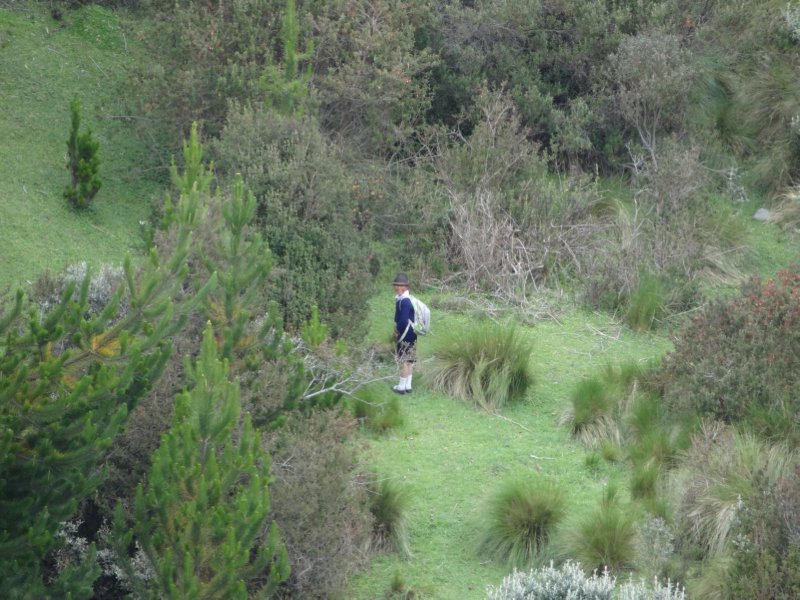 We finally arrived at the Quilotoa town exhausted (all except for S.A.M of course, who probably could have ran the entire way) after seriously misjudging the last uphill and were greeted by the coldest weather we’ve felt in months. It was probably around 10 degrees when we got there but it most likely got down to just above the freezing mark at night. This may not seem that cold until you realize that none of the accommodations in town have any heating and we were all armed with just sweaters and wind breakers. It was fine during the walk because we were keeping warm by moving but once we stopped walking and the night fell it felt colder than it does in Toronto at minus 20. We played a game of hearts sitting right next to a small wood fire oven and continually drinking hot tea to keep warm. S.A.M won of course, probably using his x-ray implants to read through the cards, so we headed off to bed to get some rest. The lake would have to wait until tomorrow. 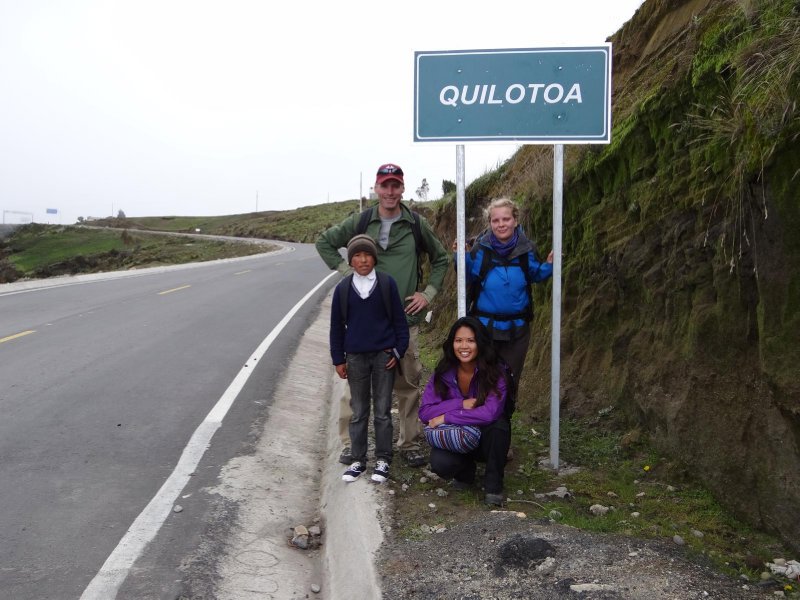 Posted by dariusz 15:05 Archived in Ecuador

Im glad you guys enjoyed it! I'm happy to hear that my blog posts are being read by other travelers

It's really love to see all this pictures.

That was really interesting blog.

So glad to get to read a real blog about the loop! I'm headed that way in about a month, and it was great to read your story and see your amazing photos. Can you tell me the names of the hostels you all stayed in each of the cities? Also, were you provided with track notes at the hostels or did you rely on word of mouth?

Thank you, and happy trails!

Thanks for the kind words! We work on this blog in a large part to help other travellers so we're happy to hear you found it worthwhile.

In general I would recommend doing the loop clockwise like we did primarly because of the milk truck run on day 4 which is an amazing cultural experience. You can't do it the other way.

We stayed at Hostel Tiana in Latacunga and we think its a great place to meet other travellers planning to do the loop. They recommend doing it counter clockwise but provide printed directions, hiking times, and information on places to stay for both directions. They are very helpful regardless of whether you take their advice.

We mostly relied on our limited knowledge of spanish to find our way though. It is very important that you can at least speak some limited spanish and understand directions because very few people wil speak any english at all. There is always someone around to help you find your way if you understand the language.

In terms of accomodations we just arrived in a given town and checked out all the places before committing. Its always good to bargain. We usually got between $10-$15 per person per night and that included dinner and breakfast as well unlimited tea. Not a bad deal if you ask me!

The lodges for the most part are very nice for Ecuadorian standards so don't worry about quality. I will look through some of my pictures and see if I took pictures of any hotel/hostel names, but in general there is no need to stick to Lonely Planet names or anything like that. The nicest place we stayed at on our 3rd night was not listed anywhere. Its the first lodge you see, on your right, as you enter Isinlivi.

Most of all enjoy the trek and the culture! Its so fun to chat with the kids on the way and the people you meet are wonderful, warm and friendly. You will have a great time!!