Visiting the Taj Mahal in Agra

Seeing one of the wonders of the world

We took a morning train from Delhi to Agra to see the famous Taj Mahal, one of the seven wonders of the world. We took the “Sleeper “ class train car, which is the second lowest class, since that was all that was available on such short notice. It was quite the experience crammed with people seemingly playing musical chairs and bare feet dangling everywhere from the 3 levels of bunks. Thankfully the ride was only 3 hours.

We were hoping that Agra being a smaller city would be cleaner but we were pretty quickly disappointed on that front. It was just as noisy, smelly and polluted as Delhi. The hotel we booked, Taj Plaza Hotel, was incredibly cheap and had a great location with a rooftop terrace where you could view the Taj Mahal and get food and drinks served. After the now usual tussle with the bag boys over which bag they should take we checked out our room. It was all quite decent except for the washroom. Here is a picture of what the shower head looked like: 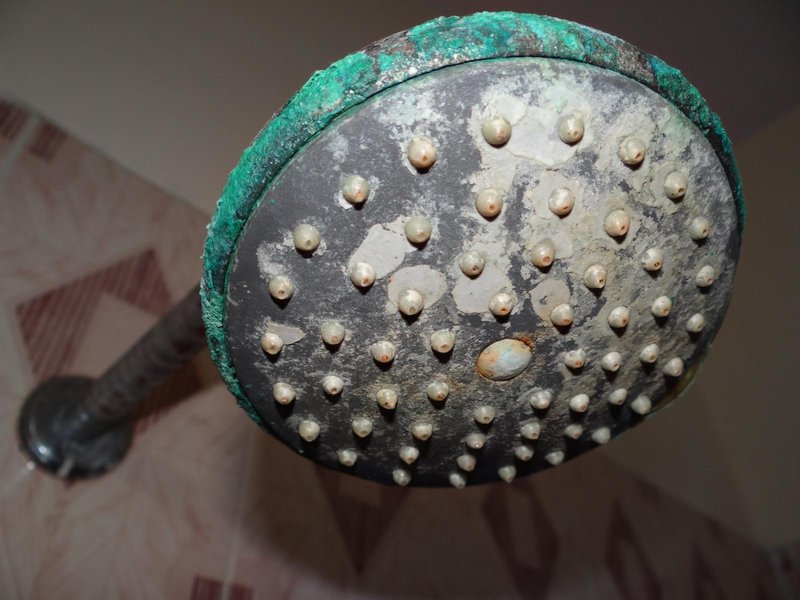 The water obviously smelled mouldy so I took my shower with my lips tightly sealed and curled inwards so that no water would have a chance to get into my mouth. Ahhh India. It’s amazing how little work was needed to make this an absolutely great place to stay. A little bit of mould cleaner, a mop, maybe some Windex, 1 hour of good scrubbing and they could easily charge double. Then again what do you expect with an all men crew running the place? Here is a picture of the view from the terrace: 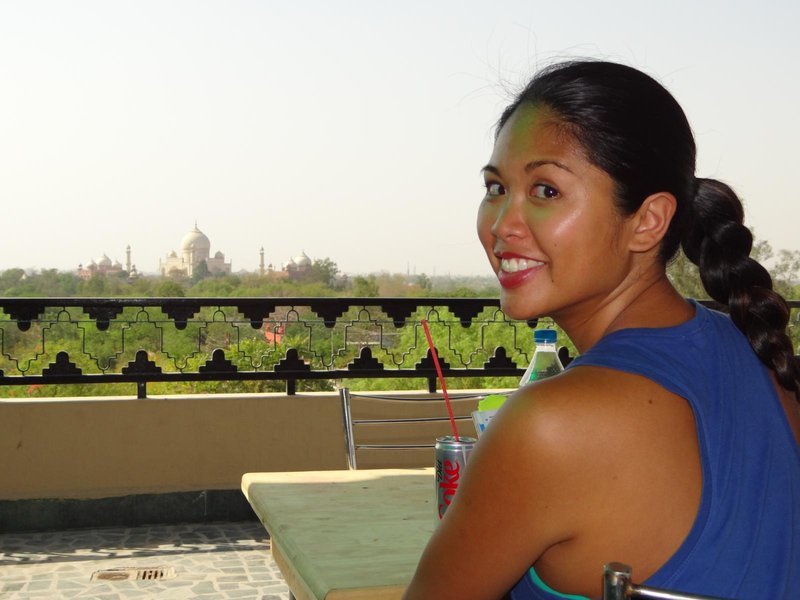 As we ventured out into Agra we realized that the touts and rickshaw drivers here are an entirely new level of annoying. It is after all the most touristy spot in India and those guys are absolutely relentless way past the point of harassment. Saying “No thank you” doesn’t work, explaining why you don’t want their service CERTAINLY doesn’t work, and even completely ignoring them doesn’t work. The best thing is to avoid any eye contact with rickshaw drivers all together and then pretend you don’t hear them, but even then there were a few that followed us for a good 2-3 minutes yelling “Sir, yes, please…. Yes, please, sir… rickshaw ride?” as if I was deaf or something.

However, the Taj Mahal itself is stunning. It’s really hard to describe in words or even appreciate its grandeur in pictures. It’s just one of those places you have to visit yourself. 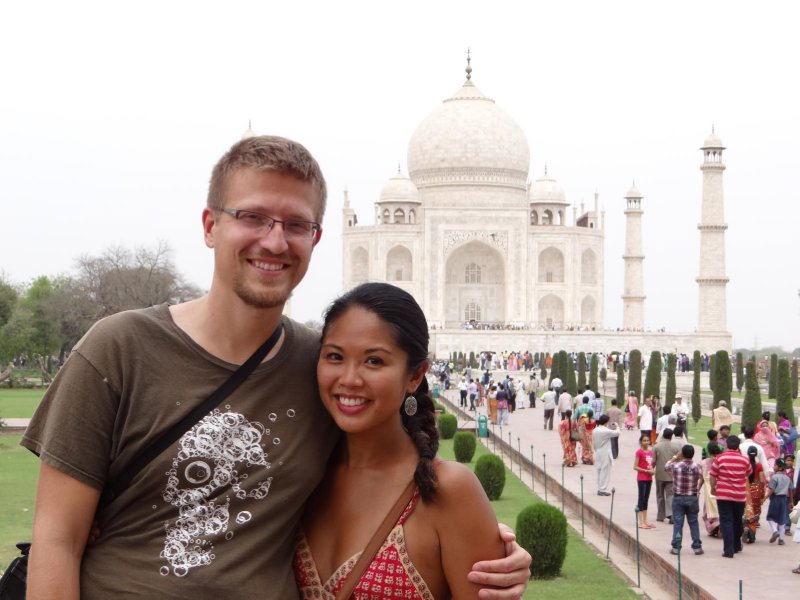 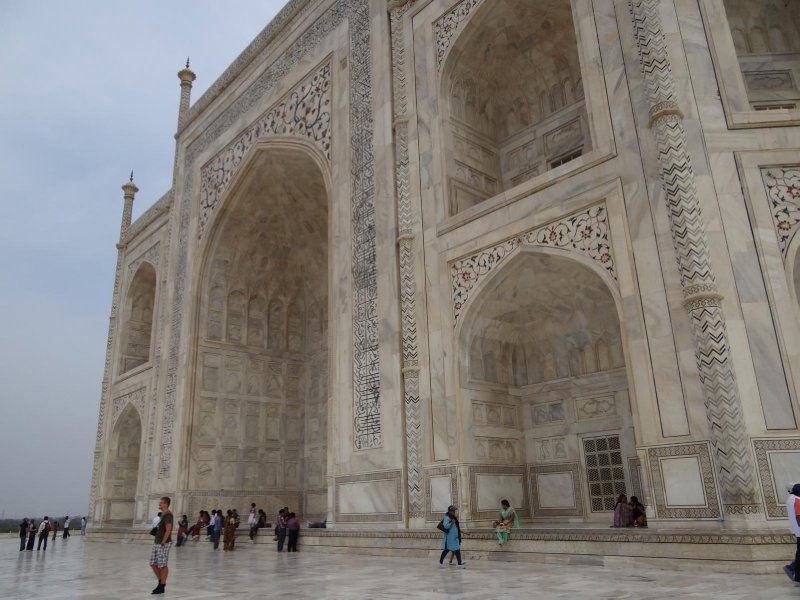 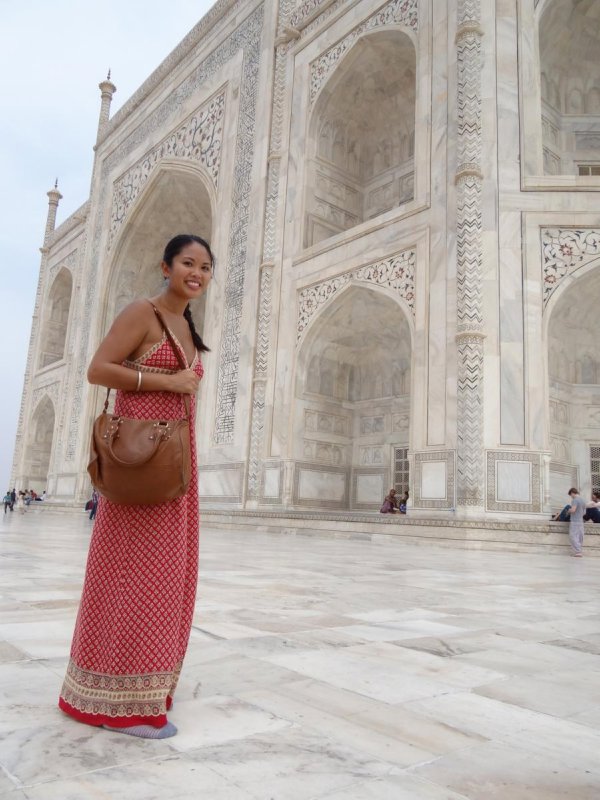 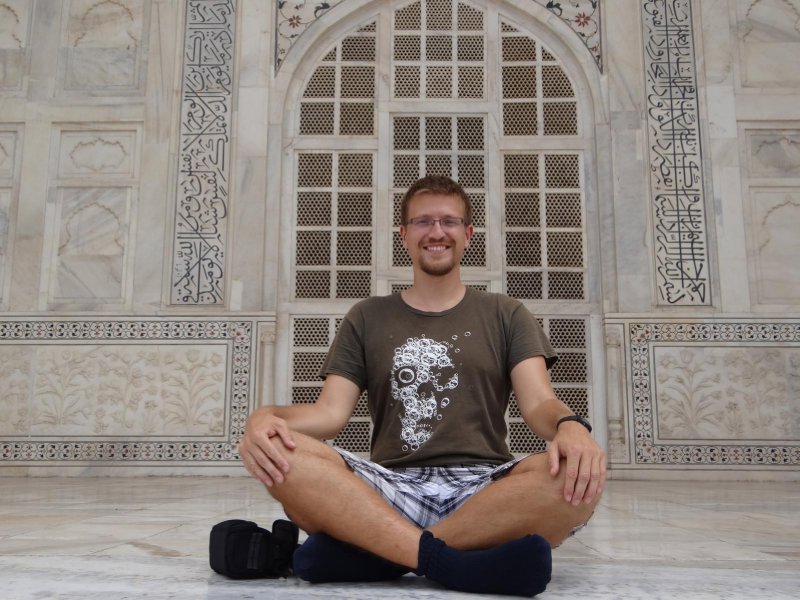 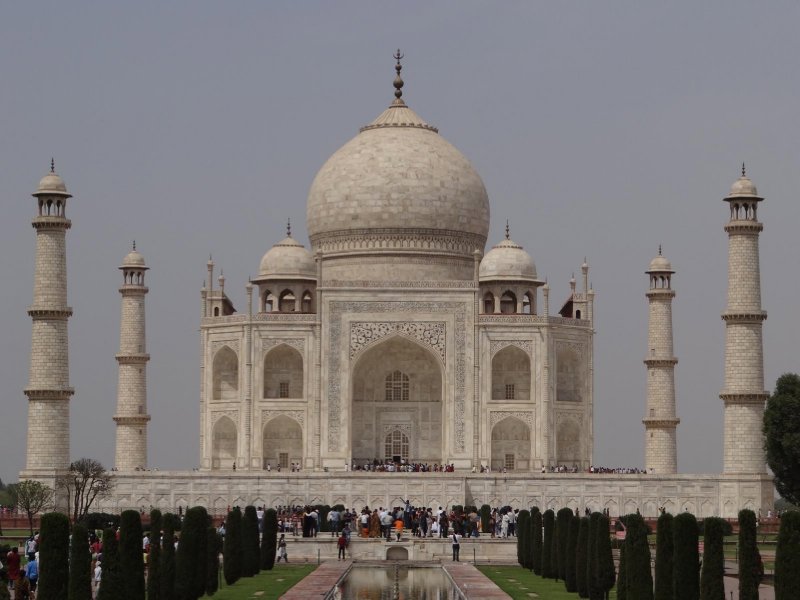 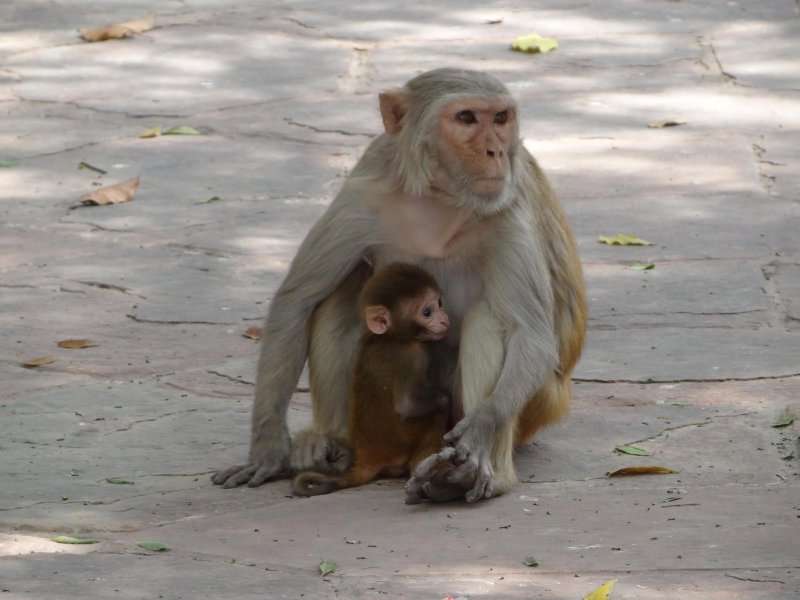 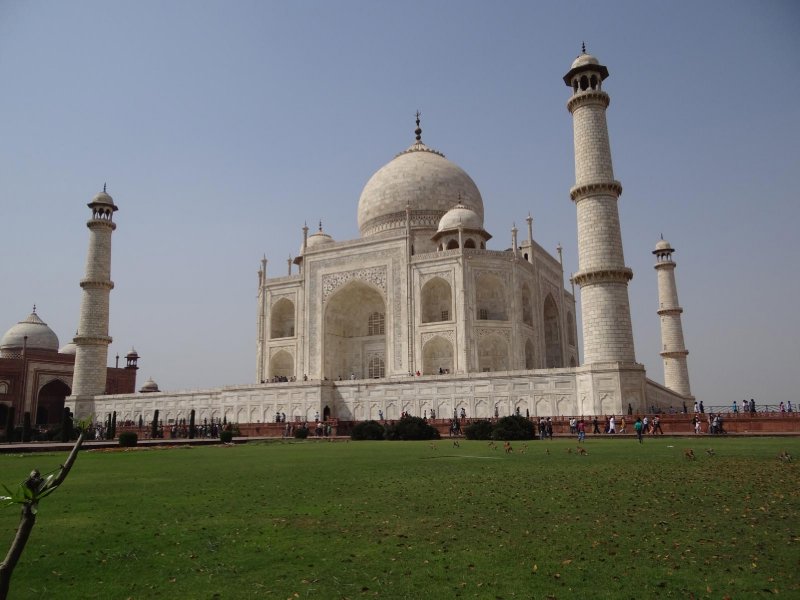 Check out the monkey troupe running across the Taj Mahal lawn in the above photo!

The area around the Taj Mahal called the “Taj Ganj” was once home to all the workers building the Taj Mahal and it’s a wonderful place to walk around. The rickshaw drivers are less frequent here and much less insistent and you get to mingle with the local people. Walking from the Hotel area to Taj Ganj feels like time travelling to a distant past. You’re suddenly whisked away to a world of extremely narrow windy streets, filled with vendors selling fruit on the sides of the street, people going about their business, cows, goats and motorcycles. You’ve just unknowingly entered an Indiana Jones movie set except everything you see is completely unscripted. 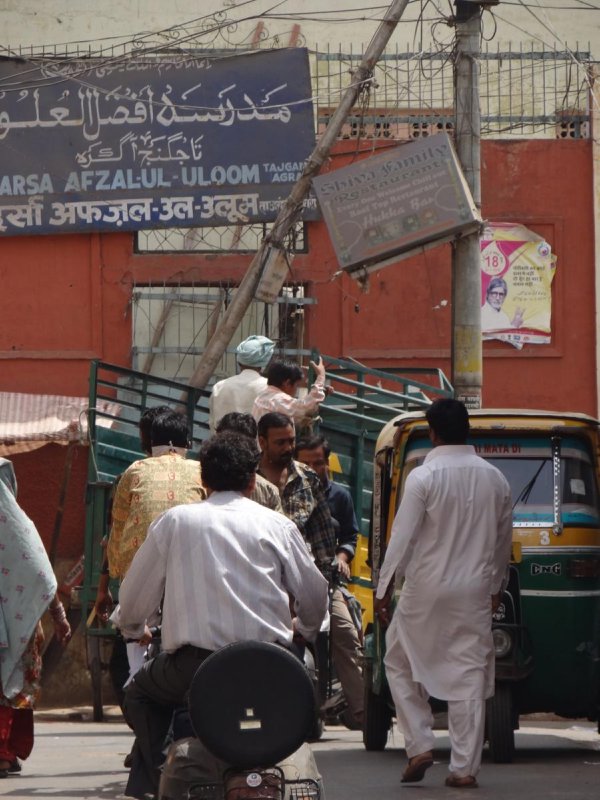 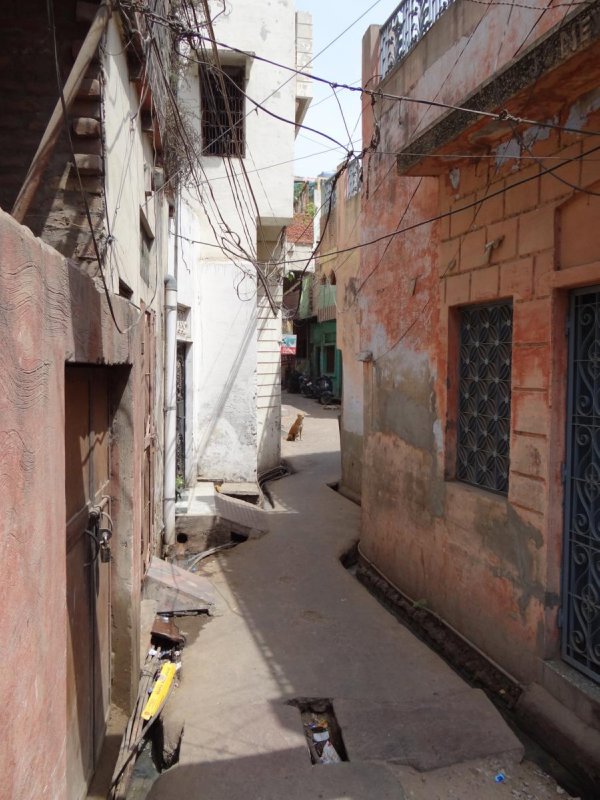 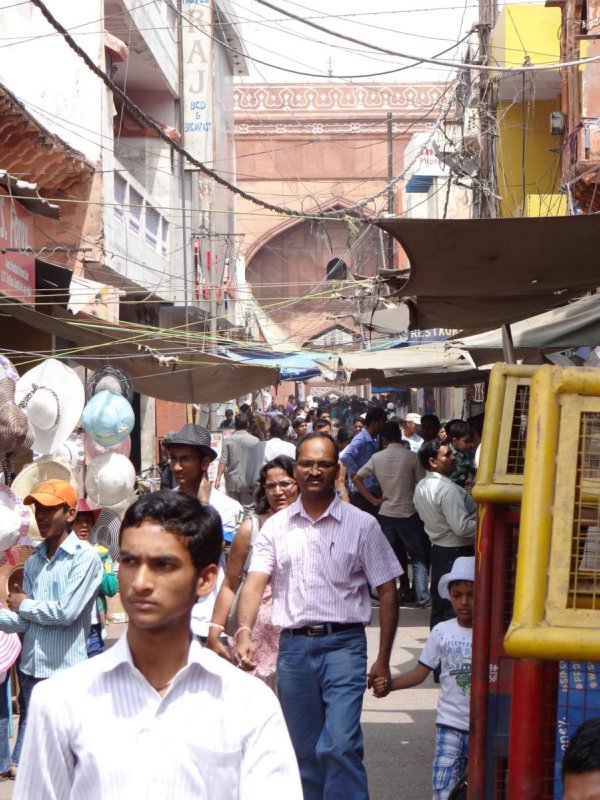 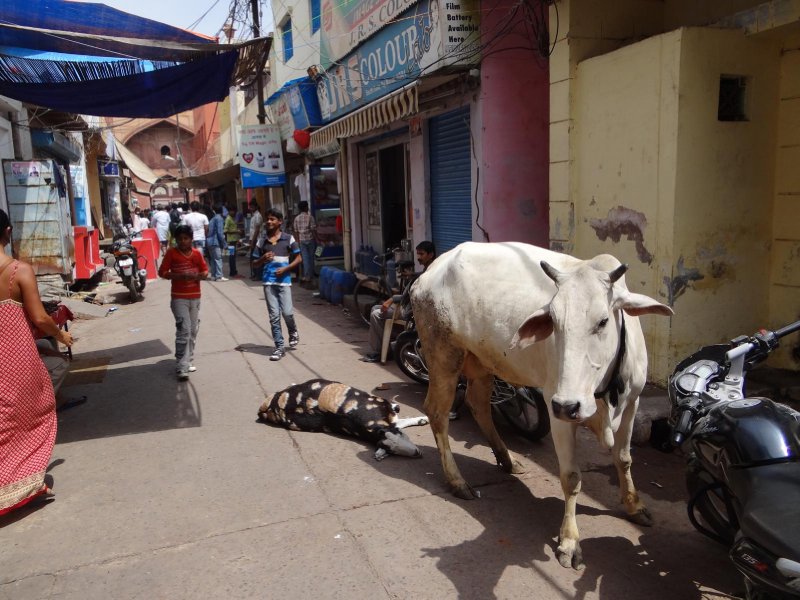 The regular folks in this area are so wonderful and friendly despite the fact that they live in such poverty that it’s both heart warming and heart breaking at the same time. The Taj is a world renowned tourist attraction and entry is actually quite expensive even by western standards but its clear none of that money goes to the local community. We chatted with some of the local children and then somehow got into the middle of a festival. We are still not sure what they were celebrating but they told us it’s “Happy!” and it sure was! They had a procession going with a bunch of drums and a whole slew of people throwing colored powder at each other and everyone around them. We were quickly initiated into the fun. Here is a picture of Kristine: 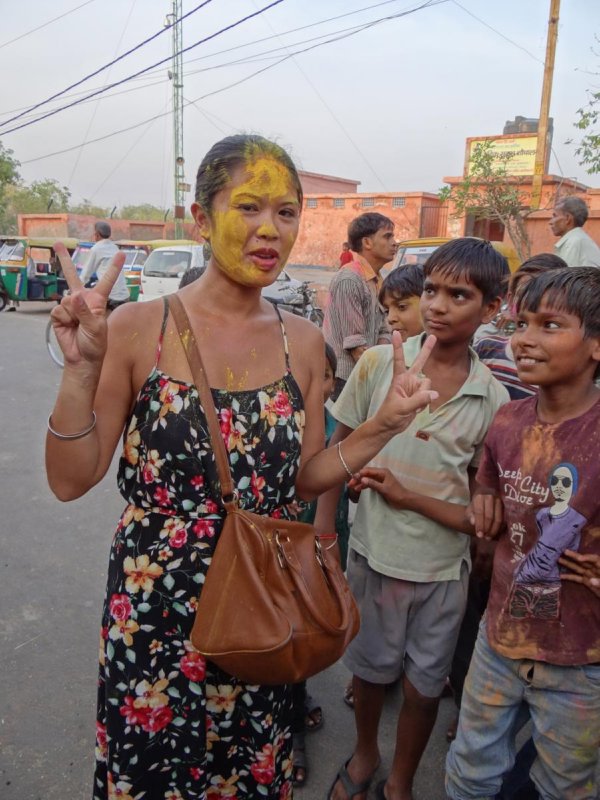 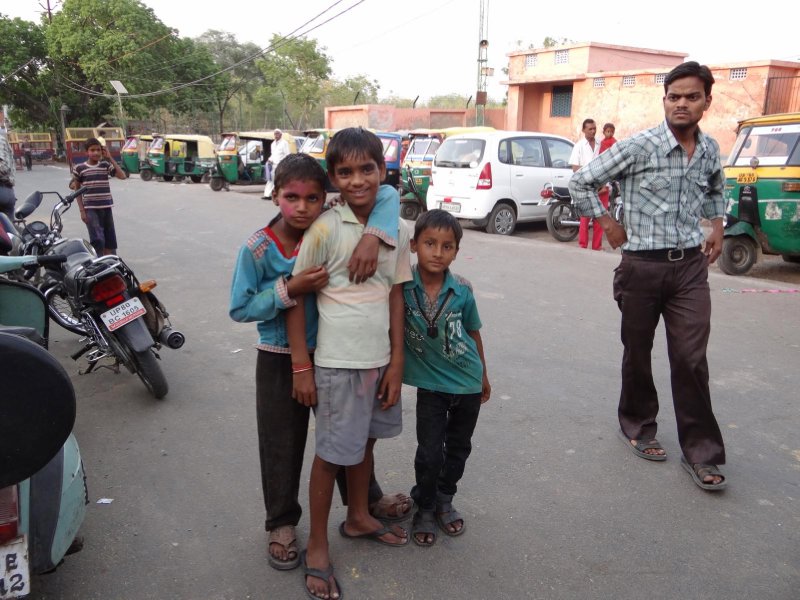 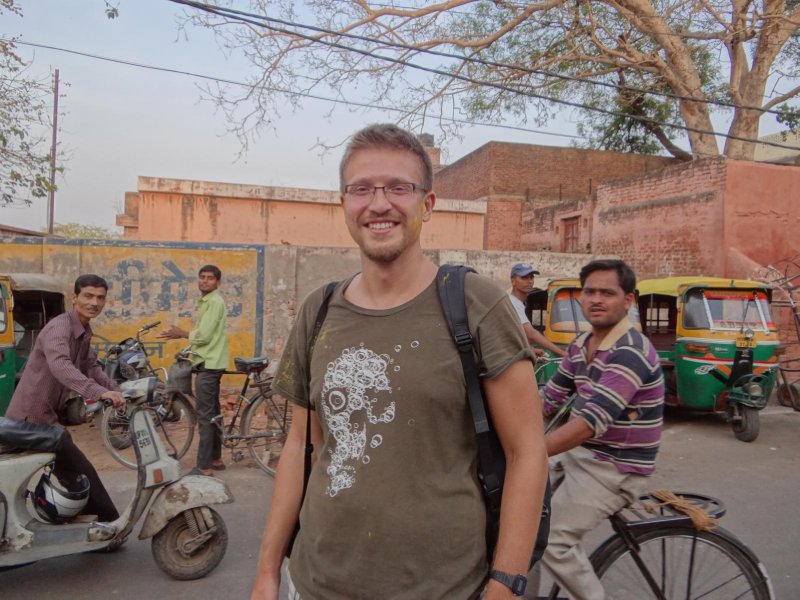 The next day we decided to make it out into the Agra Fort. It was the seat of power for the Mughal emperors for generations and the sheer size and grandeur of it shows it. The setting of the peackock throne with the backdrop being the river and the Taj Mahal must have been an extremely impressive sight to any visitors or dignitaries the emperor would receive. The throne bearing the largest diamond in the world used to sit on the black marble platform shown in pictures below before being stolen in one of the many raids after the Mughal Empire fell: 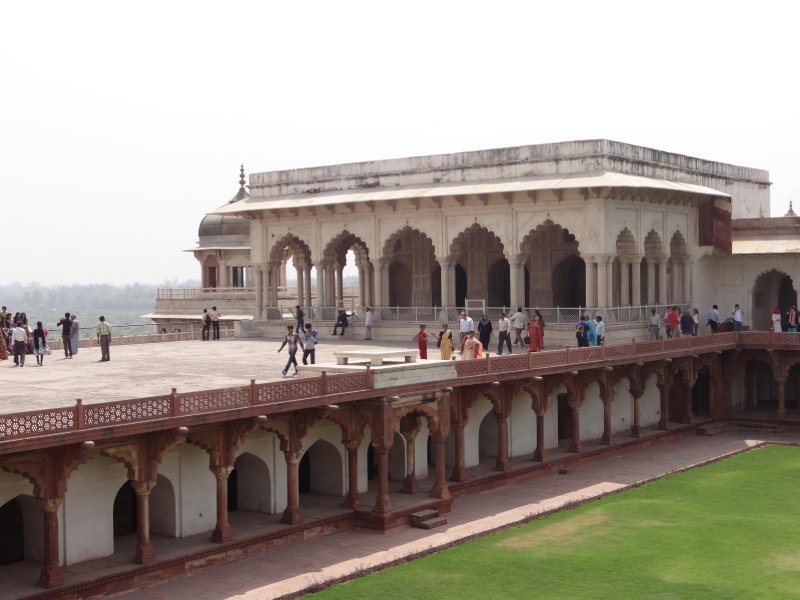 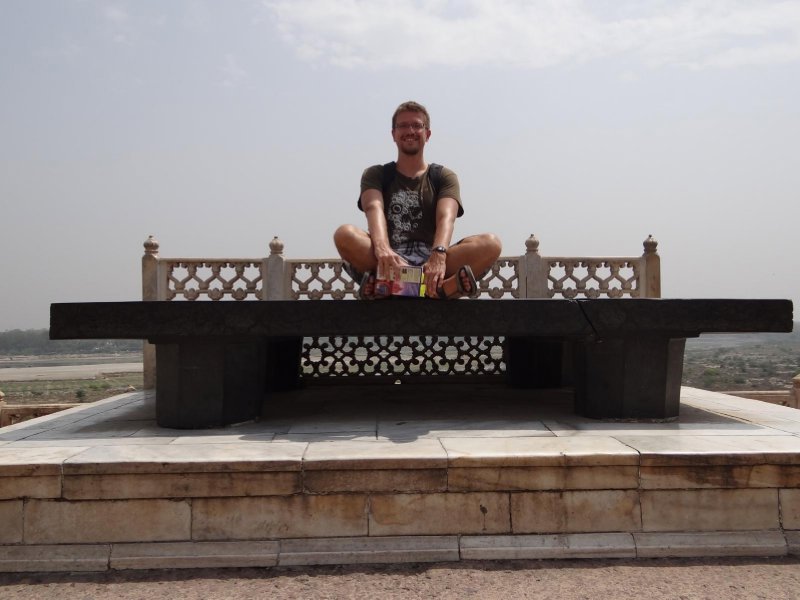 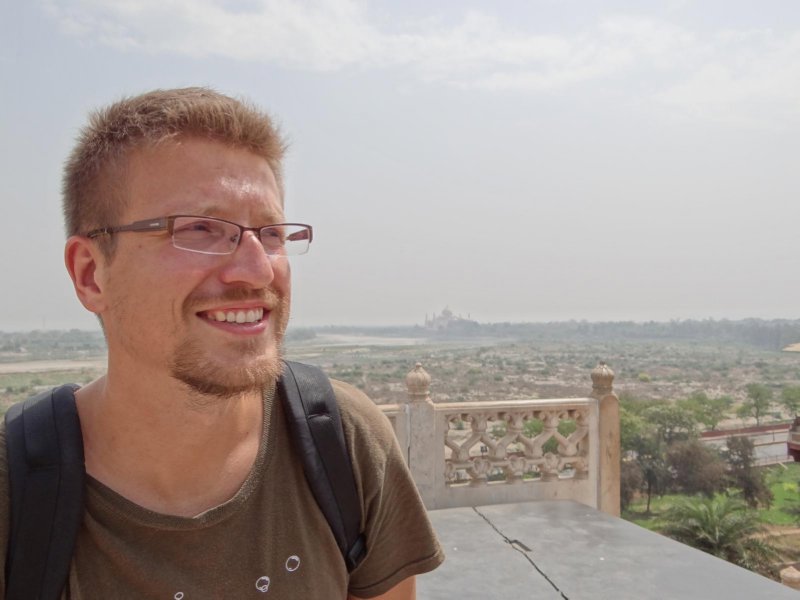 The other very interesting part of the Fort is the accommodations provided to Shah Jahan (the emperor who built the Taj Mahal) by his son Aurangzeb when he imprisoned his father. Aurangzeb disagreed with Shah Jahan on how to run the country so he imprisoned him in the fort and took over as Emperor. However, he did provide his father with some swanky rooms and a window with a perfect view of Shah Jahan’s most beloved building, the Taj. Shah Jahan would spend the rest of his days in this house arrest prison. 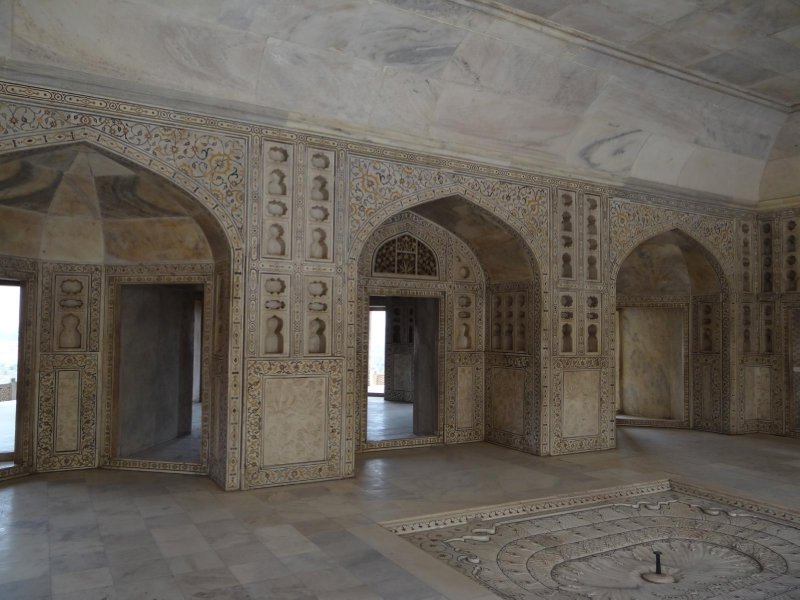 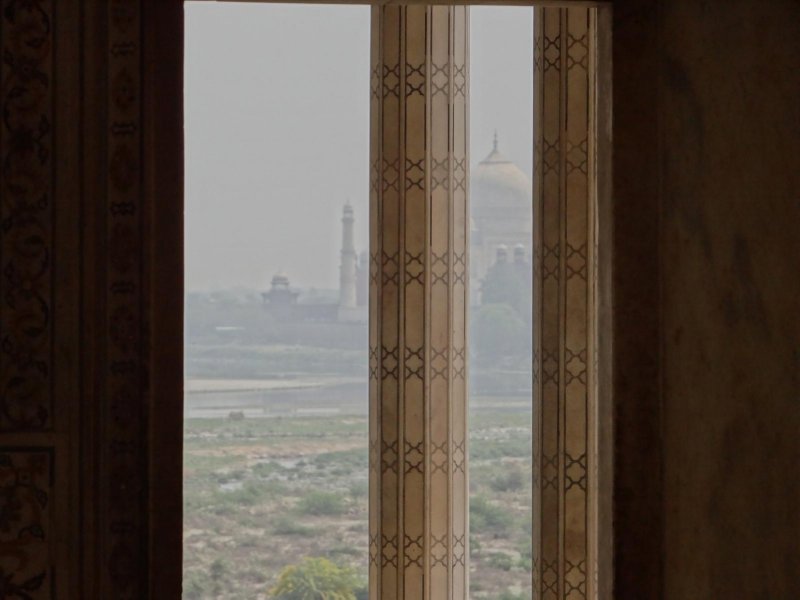 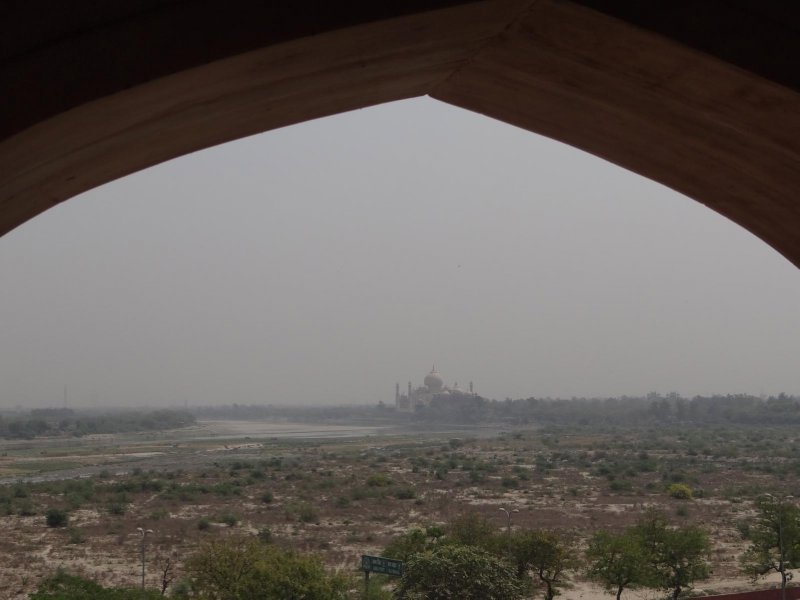 It’s interesting to note the source of the father/son disagreement. Shah Jahan and his ancestors, all Mughal Muslims, achieved control of much of northern India by being liberal and tolerant towards all the religions and cultures in the region. They even took non-Muslim wives and built temples for other religions with the empires money. However Aurangzeb wanted to take the country in a religiously extreme direction by forcing people to accept Islam. The results of this were disastrous, with many former allies inside India turning their backs on the emperor, and within a generation the empire was on its way to falling apart. Perhaps a good lesson in history for any current empires that seem to be forgetting they were built on multi-culturalism and tolerance and not religious orthodoxy. 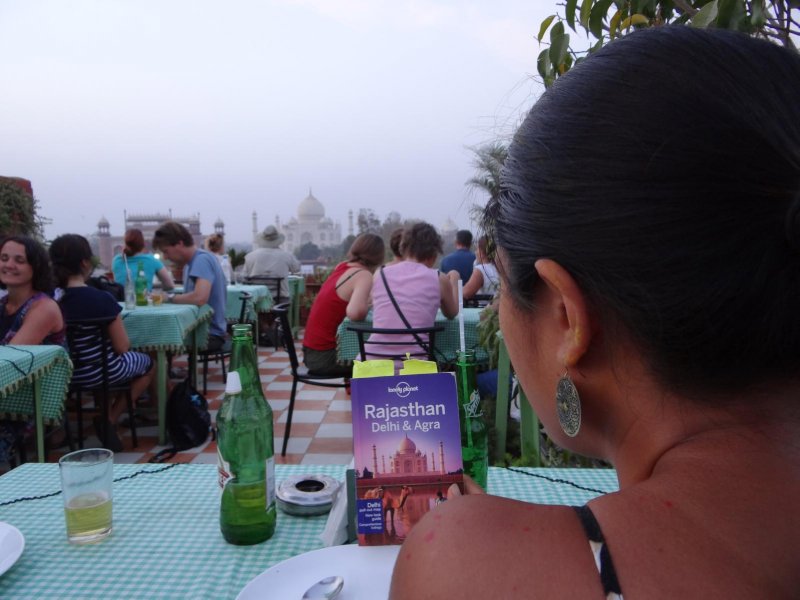 Posted by dariusz 10:22 Archived in India

I know that Holi (http://en.wikipedia.org/wiki/Holi) has powdered colour throwing. But I looked the wikipedia page, and I think it was maybe before you were there.

Thanks Laura! It might have been Holi after all since it seems different parts of India and offshoots of Hinduism disagree on when it should be celebrated. Who knows, but either way, it was fun

Wow! i loved the photos... the architecture... the detail....the monkeys. Sooooooo nice.

... wait till u see the videos when we get home!

Love the little historical stories too.

fantastic and realistic.thank you for your open views