Train Ride from Jaipur to Udaipur

Derek and I travelled from Jaipur to Udaipur by train. Instead of being in the 2nd class/sleeper part of the train where everyone’s bare, dirty feet are dangling in your face, we opted for the “AC chair.” This means that we pay for the comforts of air conditioning and a large, reclining seat. Like being in the 2nd class/sleeper car, everyone pushing their way into and out of the train against each other with absolutely no regard for personal space was (not wanted) but also included in AC chair.

The best part of this ride is the instructions on the stow-away tray in front of you. I love how this was ACTUALLY an issue enough for this “warning” to be printed on this tray! Please read the last warning on this tray: 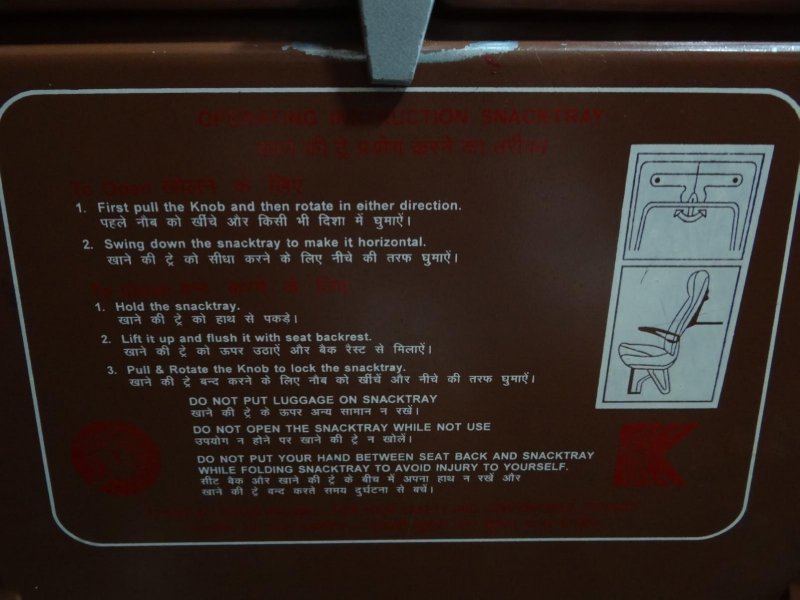 We were fortunate to be put right beside a super nice couple we met and chatted with in the Amber Fort in Jaipur! The funny thing about meeting other tourists is that everyone ends up venting about what’s driving them crazy about visiting India, exchanging stories of getting ripped off, and venting about general annoyances. In the end, everyone always gets a good laugh out of it and happily travels on!

In the middle of this train ride, we were to stay in the same car but change seats. The other couple had to go in a different car but still in the same train towards the same end point as us. These are just small examples of how little things in India may not make sense to you, but it is what it is and a billion people seem to think it’s just fine, so who am I to judge?

Derek and I made our way to our new seats and a man and his daughter were sitting there already. Derek showed him our tickets and politely informed him that he was sitting in our seat and that we would like to sit there. The man said,”Yes please… you can take my seat over there.” Derek looked at him with confusion, and then kindly said “No thank you. We would like to sit in the seats we were assigned to.” And the man responded with agitation and the side-to-side head shaking action and said ,”You may sit over there! It’s my seat. It is ok!” Derek suddenly seemed to grow in size as his frustration increasingly grew.

It’s quite amusing to watch Derek get angry, unless you’re the one he’s getting angry at. I’ve only seen him get angry like this 3 times. Once in New York City while a guy wouldn’t stop pestering me, another time in Venezuela when a man wrongfully accused Derek for budding in line, and this time was the 3rd time. First, it’s so difficult to see Derek angry because he is naturally so good-natured, jovial, and smiley. But when becomes angry, he reminds me of the incredible hulk as he slowly grows in size, hovers over the cause of his discontent, while his face contorts into something very threatening. I’ve been waiting for him to suddenly bust out of his clothing, but that hasn’t happened yet.

After about 5 minutes of arguing, much side-to-side head shaking that seemed to go faster and faster as the argument went on, and while everyone was trying to push and shove their way past us in both directions, the man reluctantly and sulkily relinquished OUR ASSIGNED SEATS to US.

During this part of the train ride, the man checking the tickets brought a policeman with him to seats occupied by a man, his daughter, and his wife. Although we couldn’t understand the language, it seemed that the ticket guy and policeman were accusing the seated man of something and wanted him and his family to get out of their seats. It started off civil enough, but the argument grew louder and the side-to-side head shaking became faster and faster. It was like a bunch of bobble-heads yelling at each other in Hindi. There was also a lot of the “take it and go” hand action that the comedian Russell Peters performed during his older stand-up comedy routines – characterized by making a fist near your chest then pushing your hand and arm out away from your body while opening your hand. The argument was visually spectacular as other people around us got into the action.

Finally, a man beside us explained that the people seated in the seats did not have any proof of identification for the ticket. The seated man claimed that his last name was “Gupta’ and that he forgot to bring his identification with him, but the ticket guy and the policeman were telling him that he had to leave and that ‘Gupta’ is such a common name. The interesting this was that nothing warranted this – there was no one that came to the seats claiming it was theirs and the man clearly had an E-ticket on him.

So why make a big deal about it? It turns out that there are clear instructions that say that if you buy a ticket online that you MUST have ID on you. But if no one else wants that seat why make him leave? Someone from the 2nd class car will just walk onto the car and claim the seats for themselves without paying and WILL NOT LEAVE unless someone shows a ticket claiming that it’s theirs.

We felt bad for the man and his family. The argument was so heated and I was afraid that someone was going to have a heart attack. Other passengers started joining in the argument, others started laughing out loud, others had their jaws dropped in surprise, and others just carried on with conversation as if nothing was happening. The fight lasted for almost half an hour.

In the end, other passengers seemed to back up the man and his family so the ticket guy and policeman gave up and left.
India is jam-packed with action and the train-rides are definitely not excluded!

Posted by krisses 05:26 Archived in India

I laughed at your reference to " take it and go" I can see them flicking their hand.... too bad the guy and his fmaily had to go through that, makes no sense to make them leave.

Yeah thankfully in the end they let them stay... funny enough they all got completely relaxed like the second they got left alone... i have a feeling stuff like that happens often

Derek the incredible Hulk pualease,
I have seen him with out his short on :p

Wish you guys recorded that confrontation,
I would love to seen Derek making his case and
the guy just shaking his head back and forth. :p