During our second day in Udaipur, Derek and I decided to go swimming again but at another palace for a few hours. It was lovely but I could almost swear that the servants were completely ignoring us. But for about $6 per person who cares! We saved ourselves a good $10-$20 by not buying any drinks from them anyway. 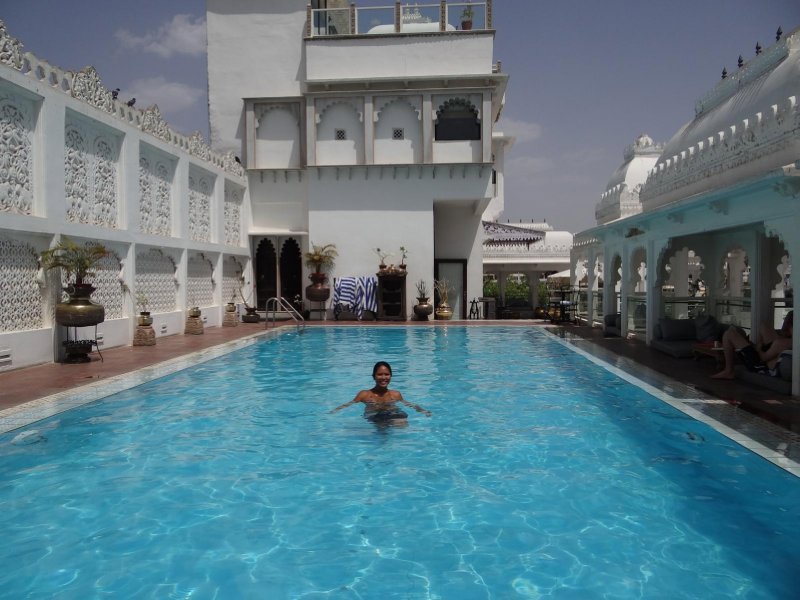 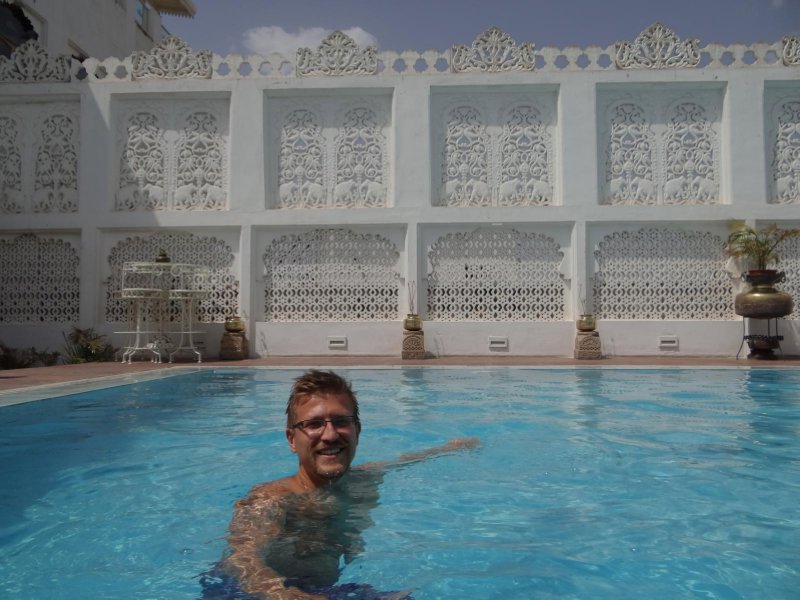 We went with Heino and Jeannette to the Monsoon Palace in the evening to check out the sunset. The palace is dilapidated with a cheesy, quasi-museum inside but the outer palace has a great view over the city. Heino said it was similar to his home country – Namibia. We enjoyed cold(ish) drinks that we smuggled into the museum grounds, watched a monkey stalk Derek and Heino, dodged unwelcome “guides”, and witnessed the blazing sun go down behind the dusty hills of Udaipur. 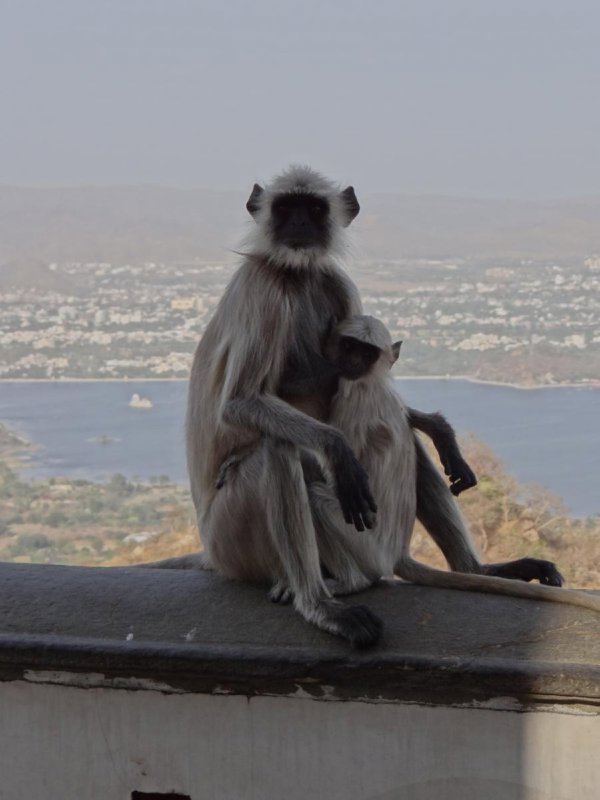 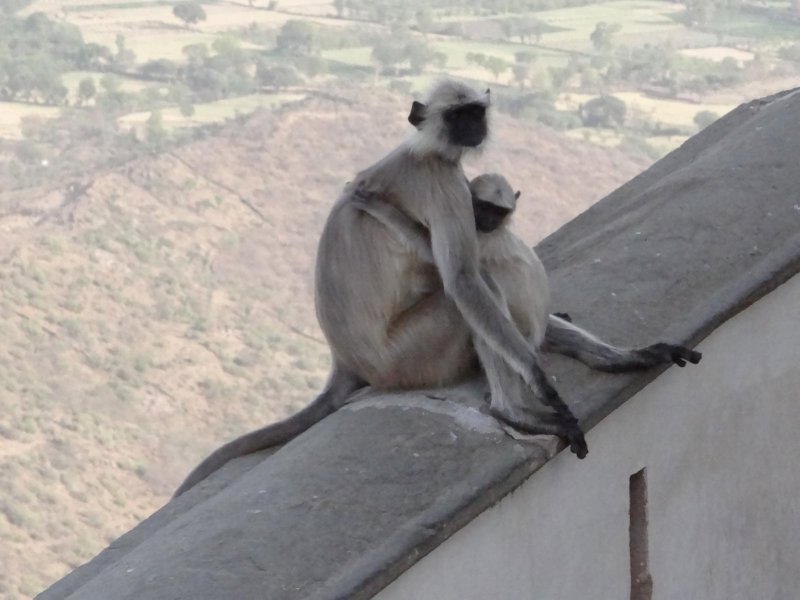 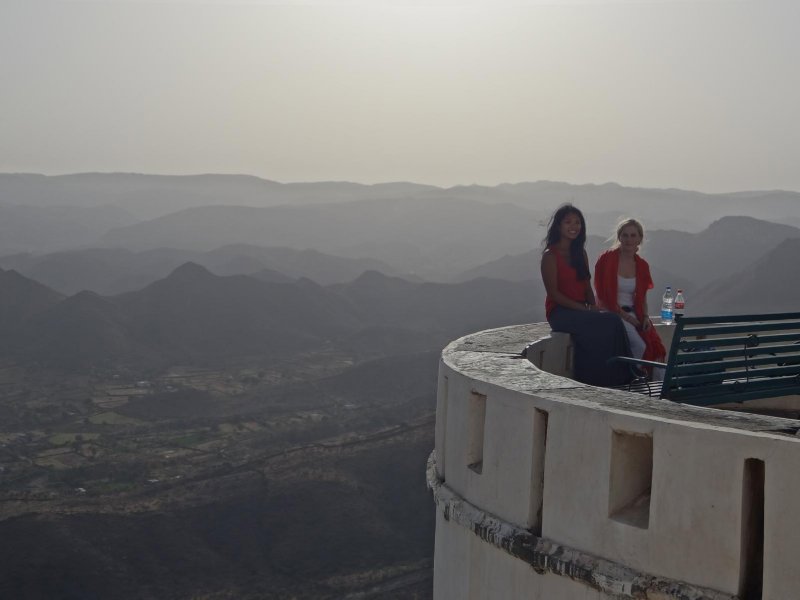 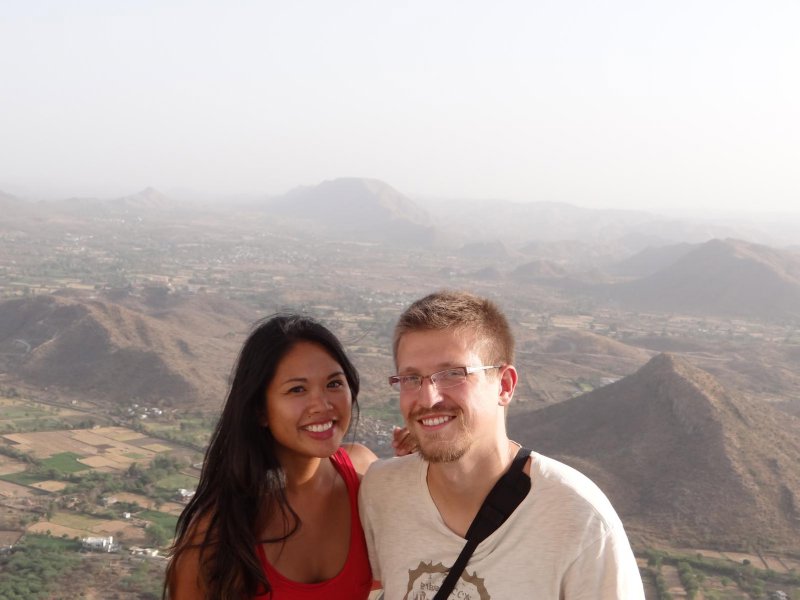 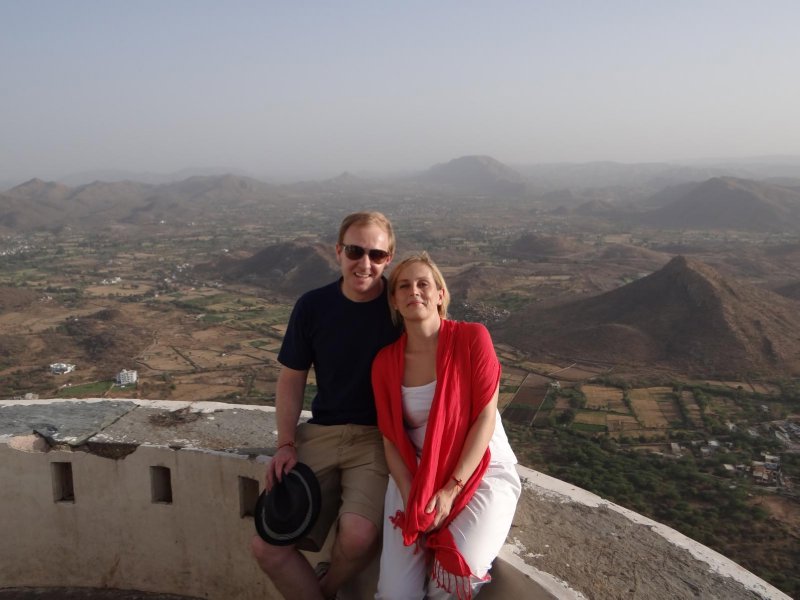 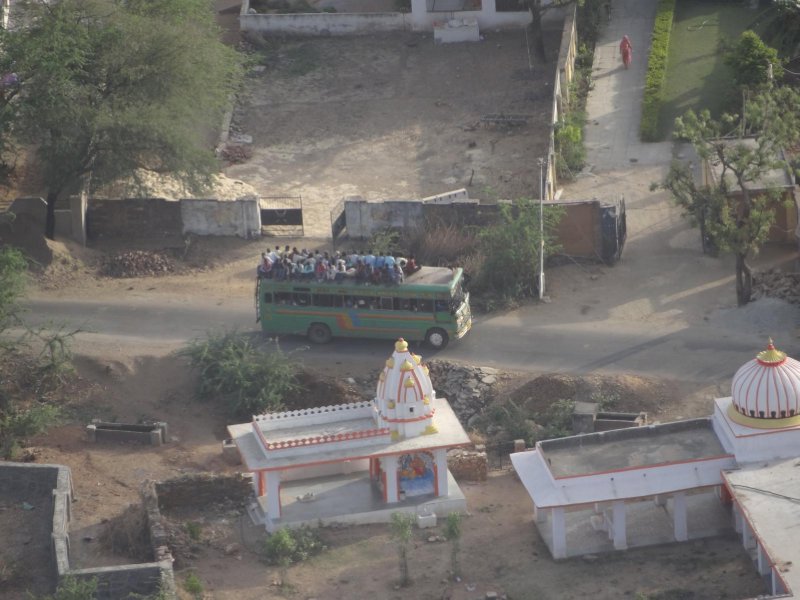 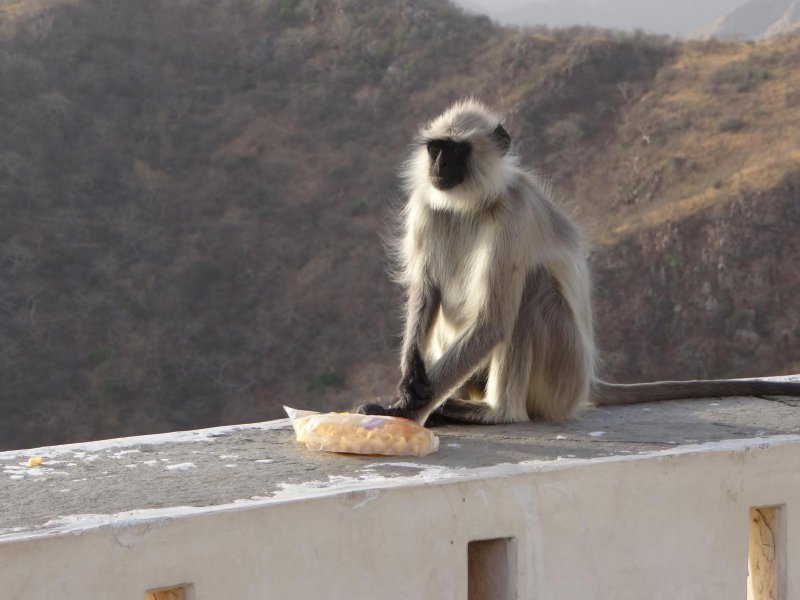 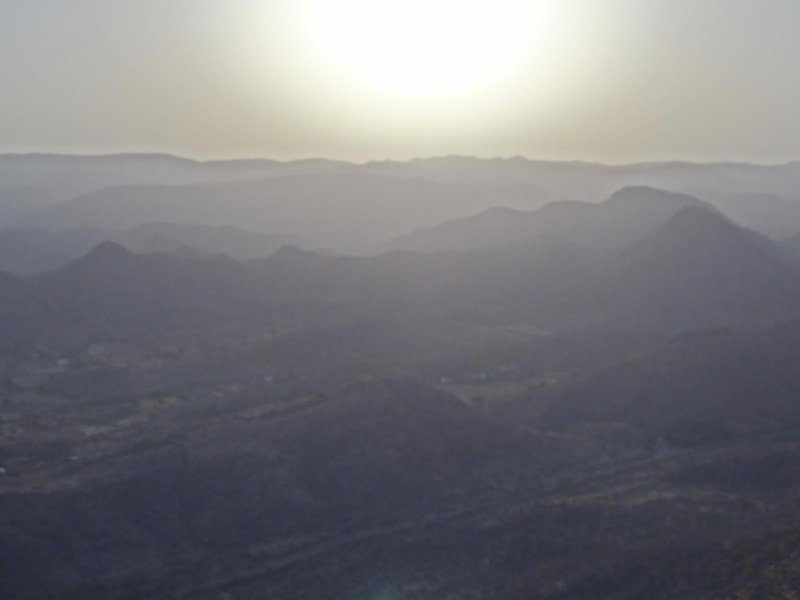 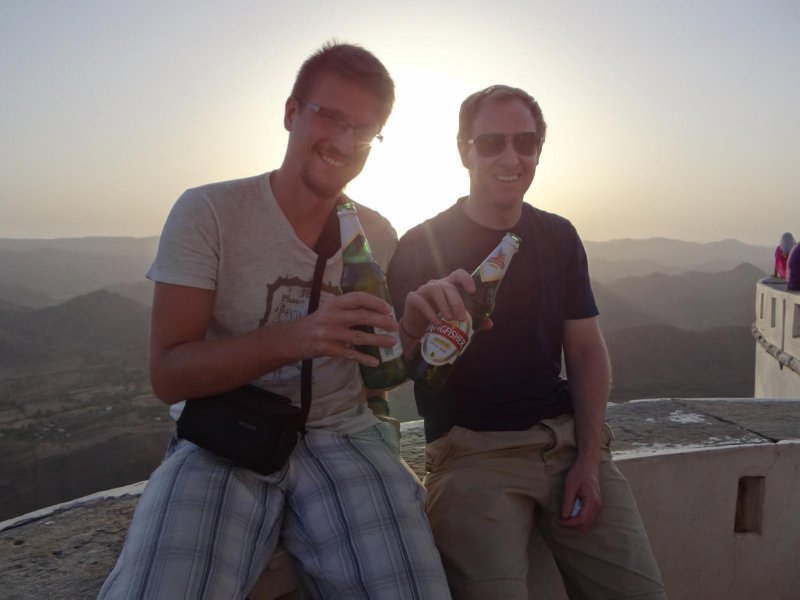 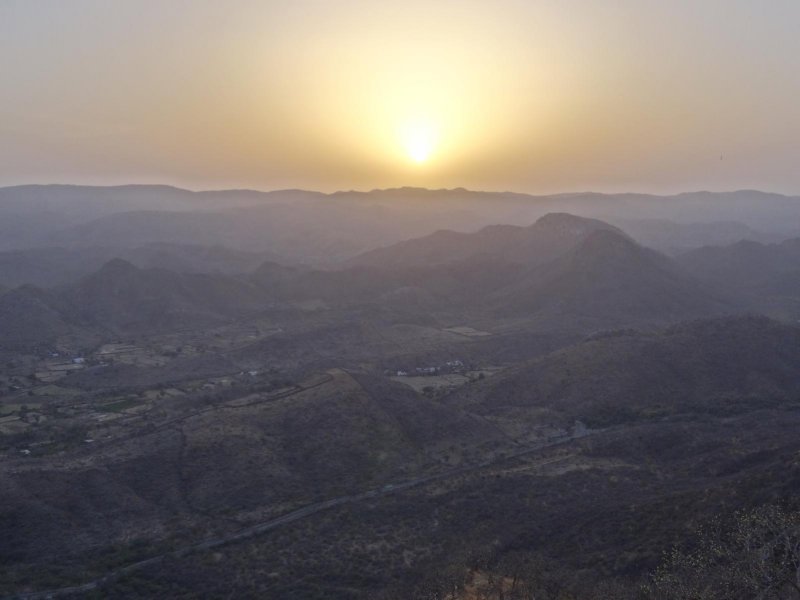 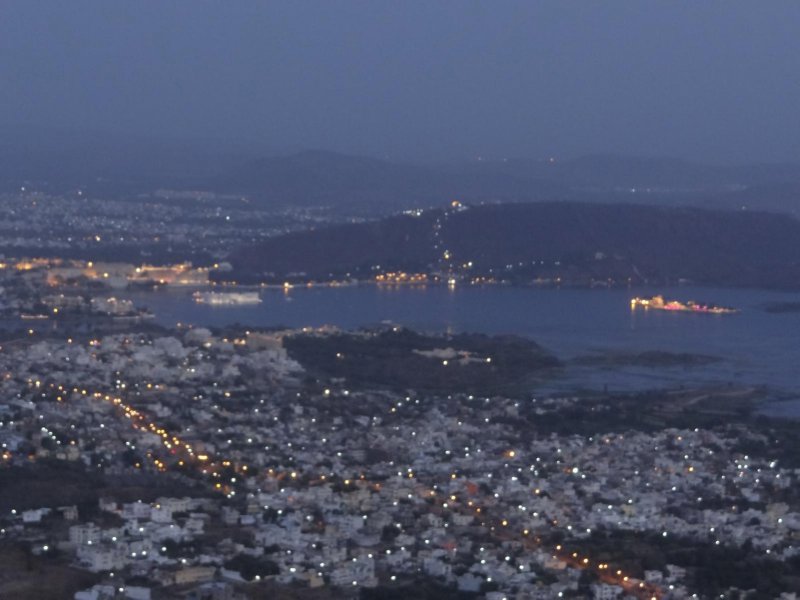 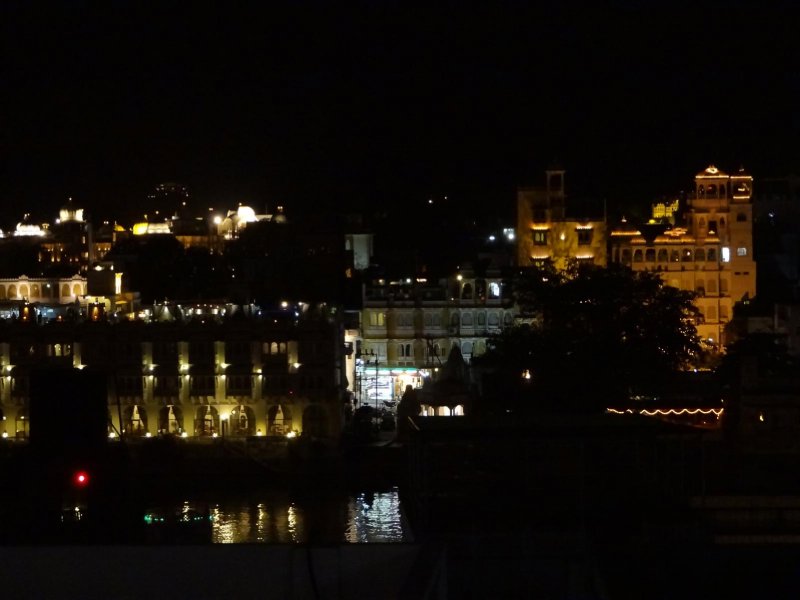 Heino had proposed to Jeannette while we were in Jaipur. When we had met them, he had already proposed but they didn’t tell us because they wanted to tell their families first. This was supposed to be their romantic engagement weekend. We didn’t want to impose on their weekend but they were nice enough to have us join them. We were all so hungry after the visit to the Monsoon Palace and wanted to eat somewhere recommended by Tripadvisor or Lonely Planet as the best way to avoid stomach sickness. We wouldn’t want Heino and Jeannette’s engagement ruined by that!

Derek found a place recommended in our guide book and quickly found the place which guaranteed great food and spectacular views. When we walked MANY flights of stairs to the rooftop of the restaurant, we noticed the view was mundane and only 2 people occupied the restaurant. The prices in this restaurant were the cheapest we have ever seen. Shortly after we sat down, all of the other people in the restaurant left.

These seemed all to be bad signs. But this was recommended in our guide book so how bad can it be? Another family came in the restaurant, looked around questioningly, sat down, read the menu, then immediately got up and almost ran out. Hmmmm….

Then we were given our menus which had Chinese characters in the front. I thought this was supposed to be an Indian restaurant? We each ordered drinks and Indian food from an extremely limited list of choices. All of us ordered something with chicken in it, but when Jeannette ordered her chicken dish, the waiter said he couldn’t do that dish. We couldn’t figure out why he could make our chicken dishes and not hers, but since it is difficult to argue or compromise in India, she chose something else.

All of these occurrences struck us as very strange and Derek looked back into the guidebook and groaned. It turned out that we were supposed to be looking for a restaurant called “Jagat Niwas”, a highly recommended restaurant on the rooftop of a palace. Instead, Derek had found us “Jag Niwas”. A lot of businesses in India will completely copy or slightly copy the name of another successful restaurant or hotel hoping that tourists will be fooled into coming to their ghetto version of the more popular business.

Until this day, Derek is still upset that he was duped by one of the oldest tricks played in India.

We discovered we were in the ghetto version and the food proved that to be right. Although 3 of us ordered chicken, I was certain that I was given the cartilage, Heino the bones, and Derek some kind of gummy “meat” which we HOPED was chicken.

Afterwards, we went to another place to have dessert and tea. The dessert was subpar and Derek and I figured that we potentially ruined their engagement weekend with an impending stomach illness caused by the awful restaurants we brought them to.

Jeanette and Heino – we publicly apologize to bringing you to the restaurant-ghettos of India! We are glad that nothing negatively abdominal occurred and wish you the best with your future! Our trip to Udaipur was definitely memorable because of you!

Posted by krisses 18:01 Archived in India

Its okay guys you can't win them all. At least
you guys didn't get sick from the food.

Like you said though, the signs were all there though :p