Ziplining from the Mehrangarh fortress in Jodhpur India

Having seen road traffic in India we were determined to avoid bus travel at all costs. However, as we found out to our dismay there is no train from Udaipur to Jodhpur (our next destination). This left us with some unpleasant choices. We could backtrack to Pushkar and then HOPE to get a train to Jodhpur, a very round-about and long way of going from point A to point B. We could take an expensive all day taxi ride alone with some random taxi driver in the desert or we could brave the dreaded Indian bus ride. We chose the lesser of all the evils and took a bus.

The bus itself was a piece of work. It had started its life as a relatively familiar reclining seat bus with luggage storage in overhead compartments. However given how over populated India is this was seen by Indians as a complete waste of space and could be improved upon. You actually have to admire their ingenuity while at the same time wondering how little a human life must be worth for something like this to be allowed. The bus was modified by taking away the “unnecessary” overhead luggage space (I mean the luggage can just go on top of the people, come on!) and putting in something that looked like dog kennels in the space above the seats. The dog kennels were being used as sleeper compartments where entire families, 5 children, grandparents and all, would squish in and ride. We were wondering if any of them had ever broken down and fallen on top of the seats killing the seat occupants but to be honest they seemed quite solidly built. Take a look at the picture below to see what it looked like: 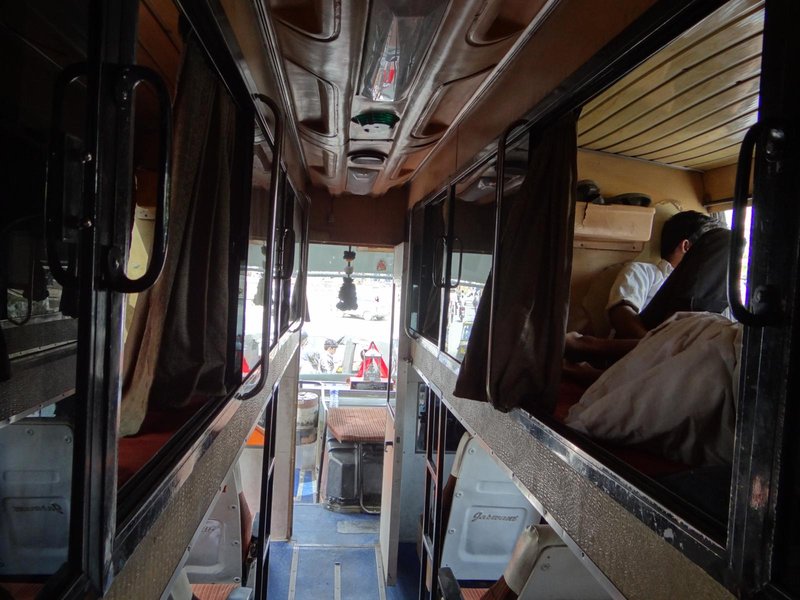 This is Kristine’s reaction to sitting underneath a kennel with an entire Indian family squished into it: 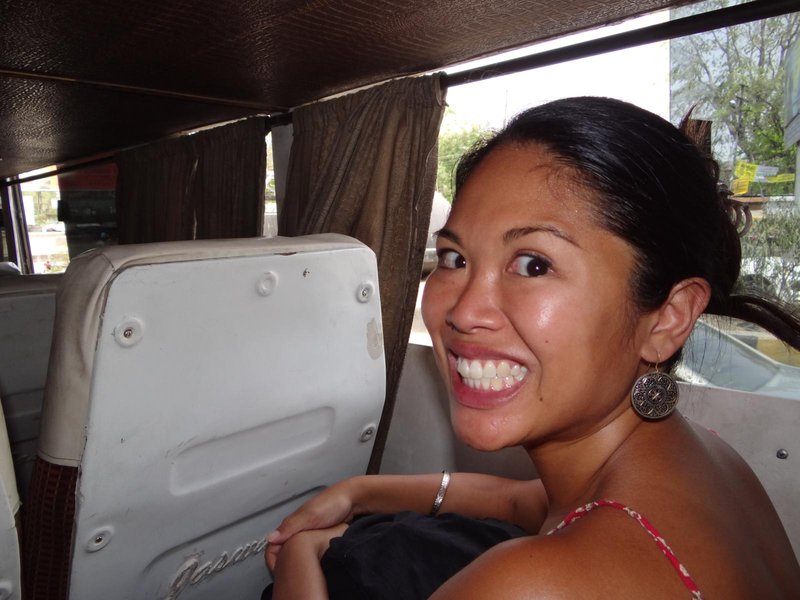 The place we were staying at in Jodhpur was called Heaven Guest House and it was run by a wonderful Jain family who immediately made us feel right at home. For those that don’t know, Jain is an offshoot from Hinduism that respects all living things even down to insects (ie. Very strict vegans) and has decided to get rid of the caste system. The guest house was simple but far exceeded our expectation in terms of cleanliness, views of the fort, food and how welcome we felt. It was clear that Nisha, the mom, was the boss and I think that had much to do with how well the place was run compared to the male-only Hindu places we stayed at before. Here is the view from the balcony where we ate our meals: 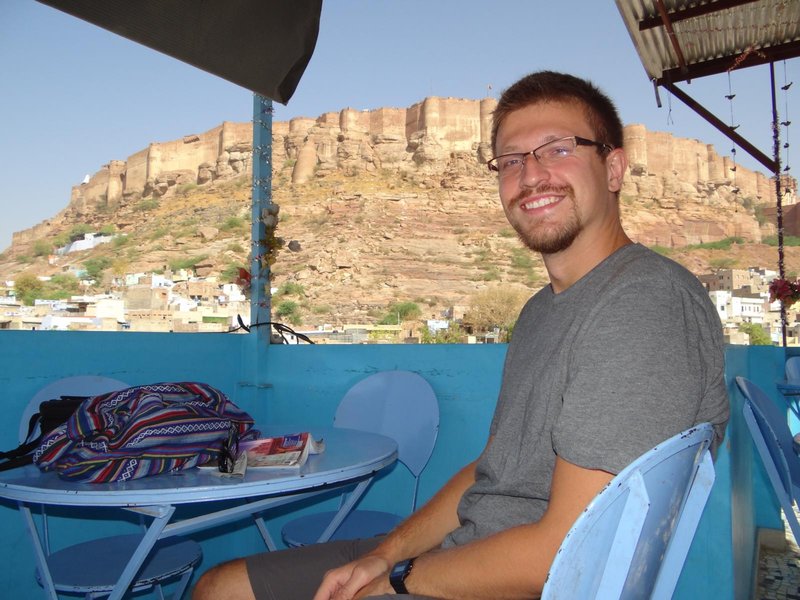 Speaking of meals this was also the place where we had our first Nepalese encounter as the cook was an extremely friendly Nepalese kid who cooked delicious food. If the rest of the Nepalese people are going to be this friendly we will really like Nepal.

The reason to visit Jodhpur is of course the imposing Mehrangarh fortress which, not surprisingly, has never been conquered by an opposing army. It is an amazing fairy tale like feat of architecture but also a very functional and practical defence mechanism. The corridors behind the heavy gates turn 90 degrees to the right or left and upwards right after the gate making any attacking army sitting ducks if they ever managed to actually breach the gates themselves. There are tons of twists and turns going up and everywhere there are vantage points where the defenders would punish any attempt to infiltrate the fortress. It is really cool walking around and imagining what it would have been like either defending or attacking this military marvel. 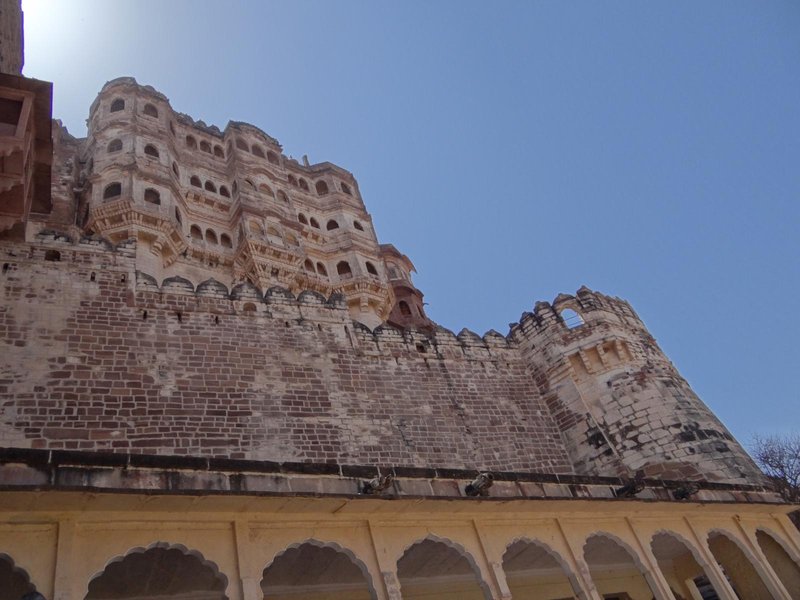 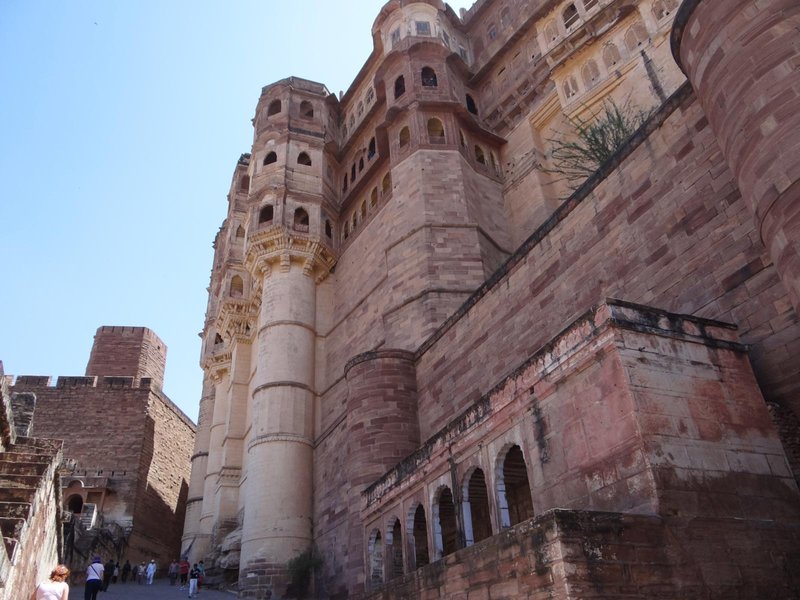 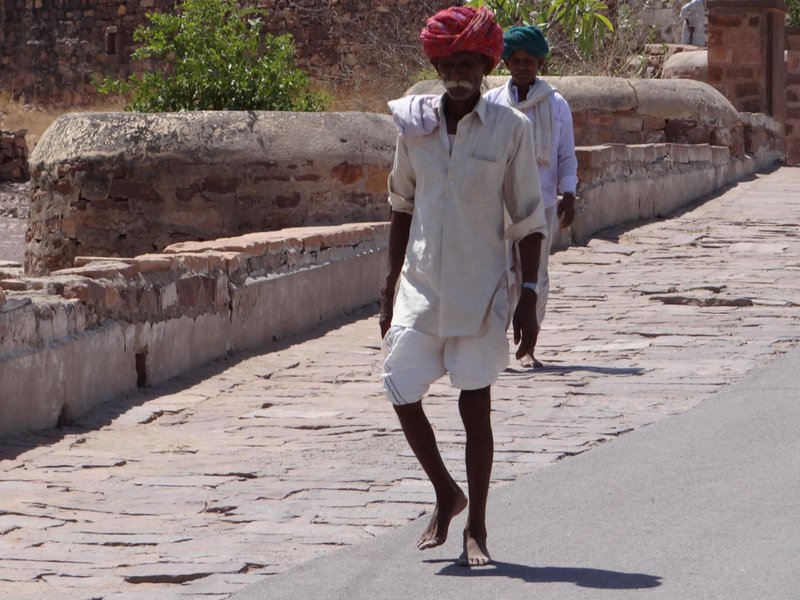 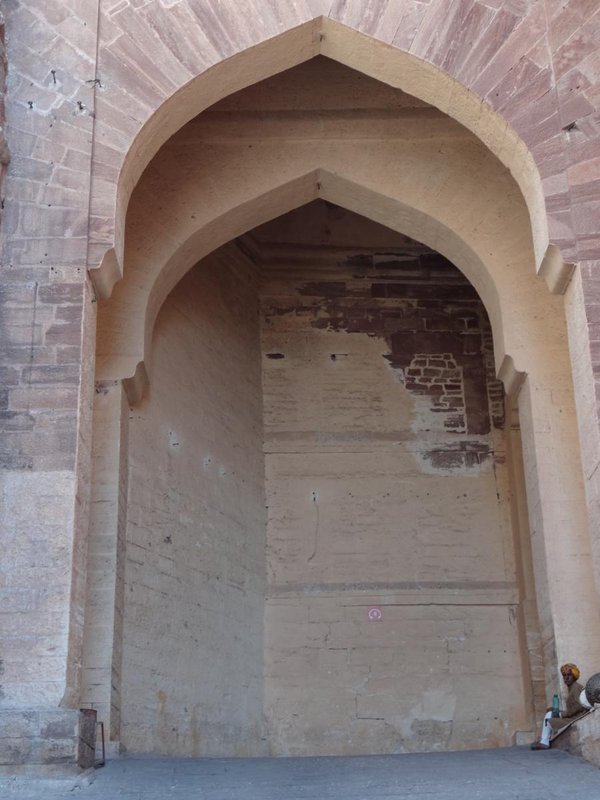 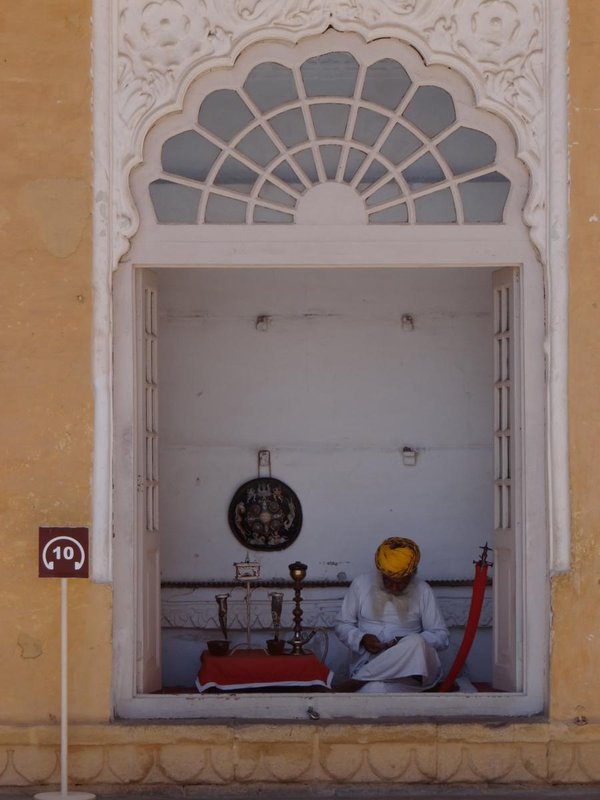 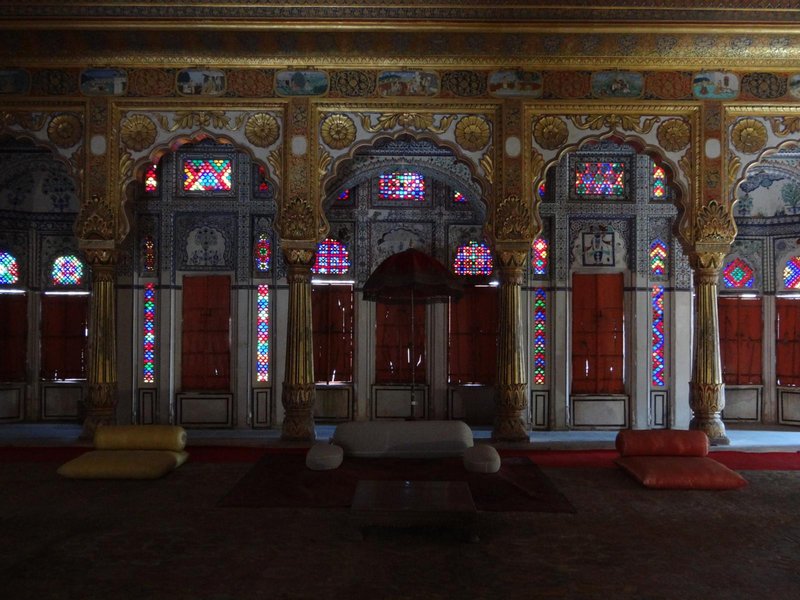 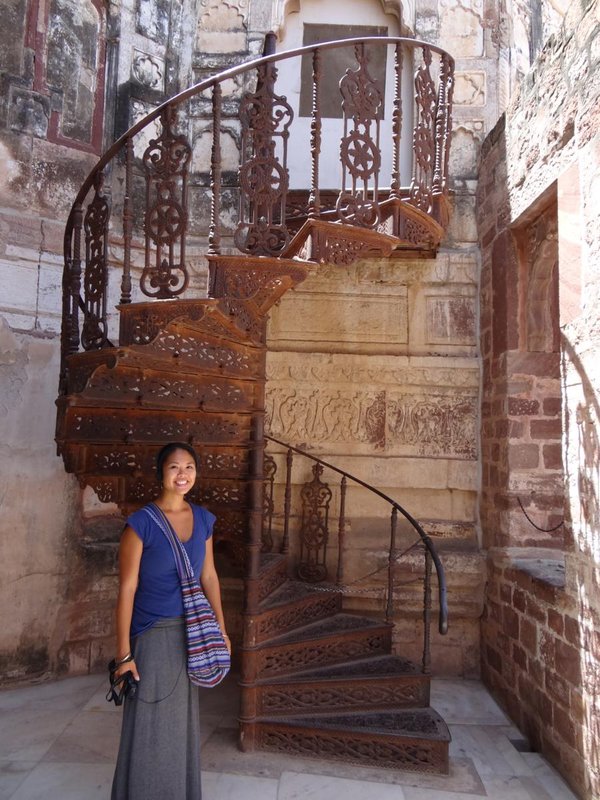 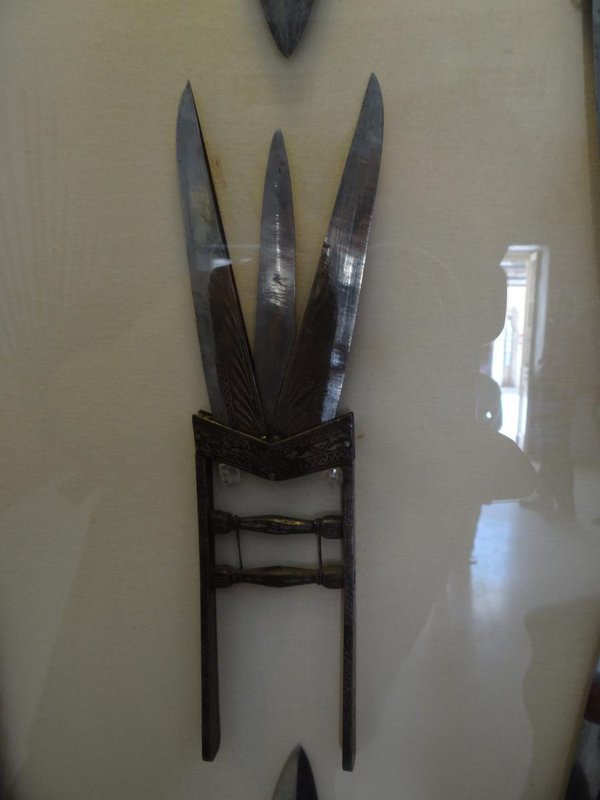 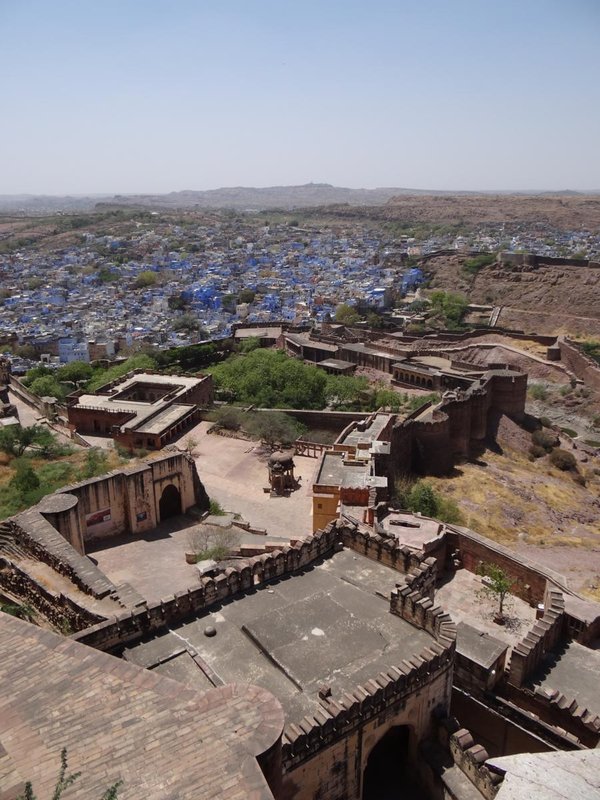 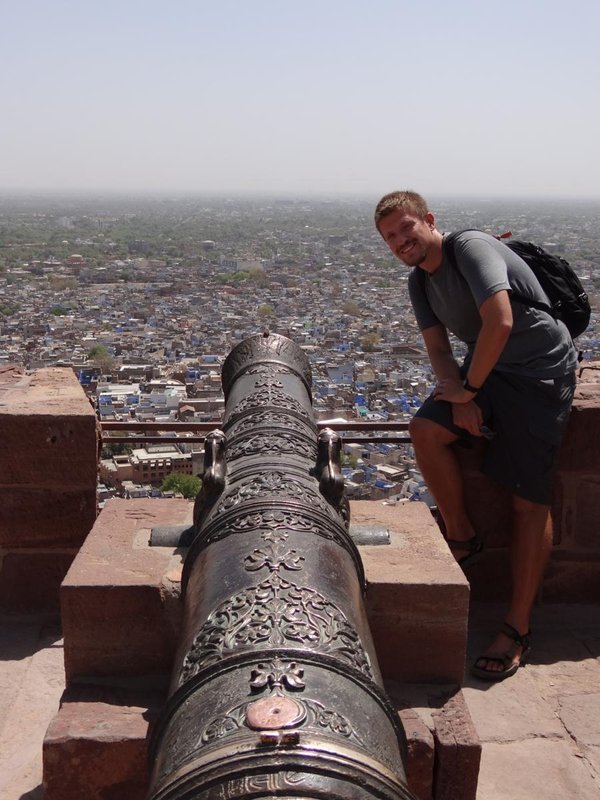 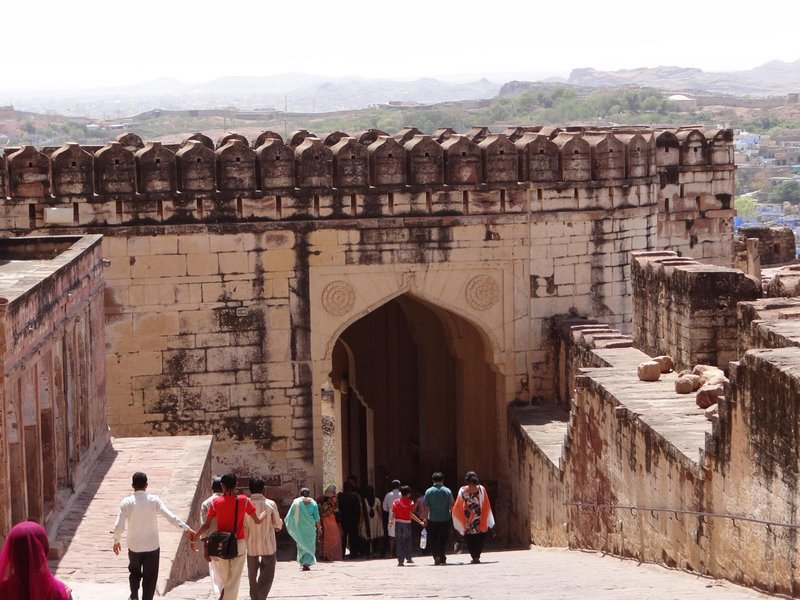 Among all the amazing historical artefacts the fort has to offer there is one that is especially disturbing even more so when you consider how recent it is. Near the gates there are clay plaques with hand imprints on them. These hand prints belong to women who committed “Sati” (ritual suicide) by throwing themselves on their husband’s funeral piers. Given that it was usual for a high ranking man to have more than 10 wives (though the wives had to be completely loyal to just their one husband) this is one very creepy reminder of what was considered acceptable in India less than 100 years ago. Of course the man didn’t have to kill himself if any of his wives died, or even if all did, since after all a woman was just another of a man’s possessions and not the other way around. 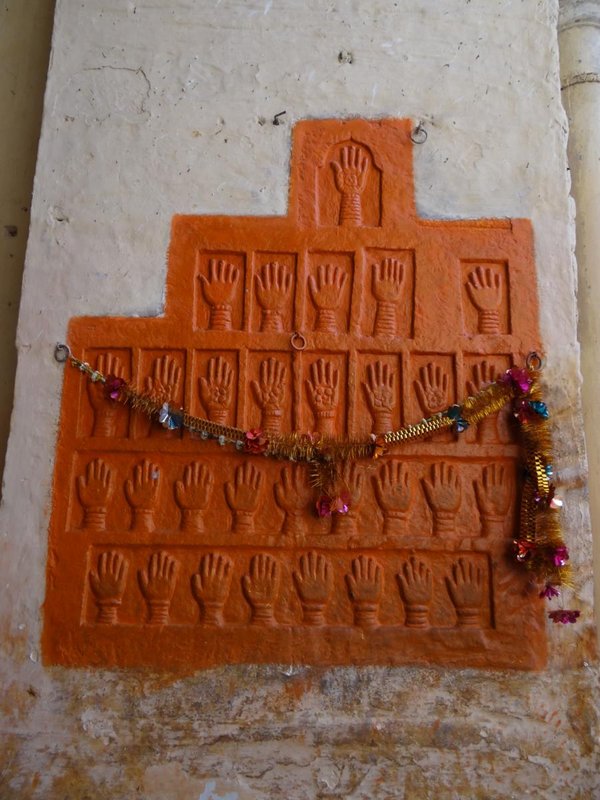 Going back to the military aspects of the fort, these days the best way to infiltrate the fort is to zip right into it from the nearby hills. That’s right, a British company setup zip lines in and out of the fort and for a relatively small fee you can zip line all around the amazing walls. This is not something we were going to miss of course so here are some pictures from our adventure: 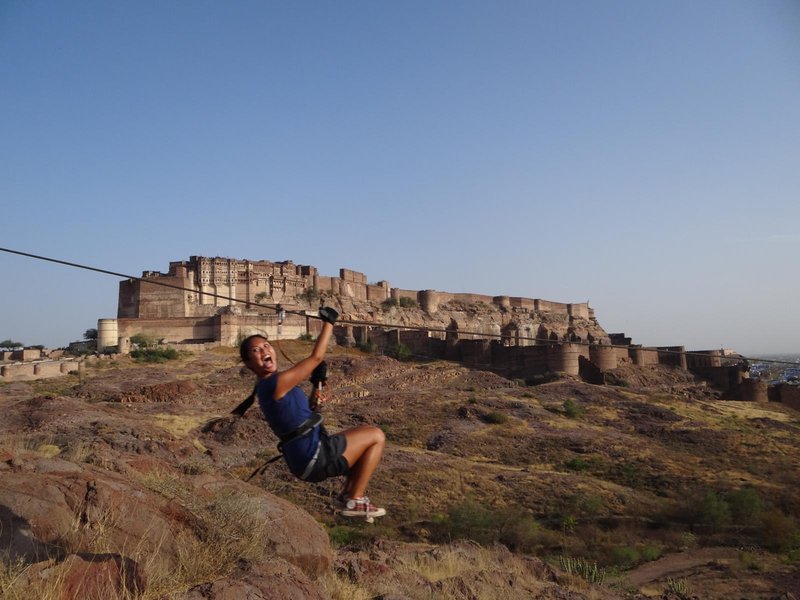 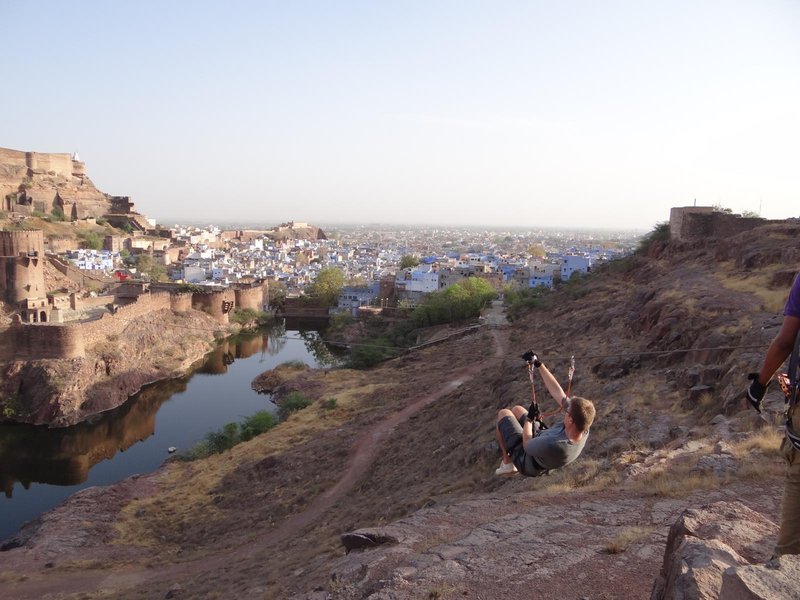 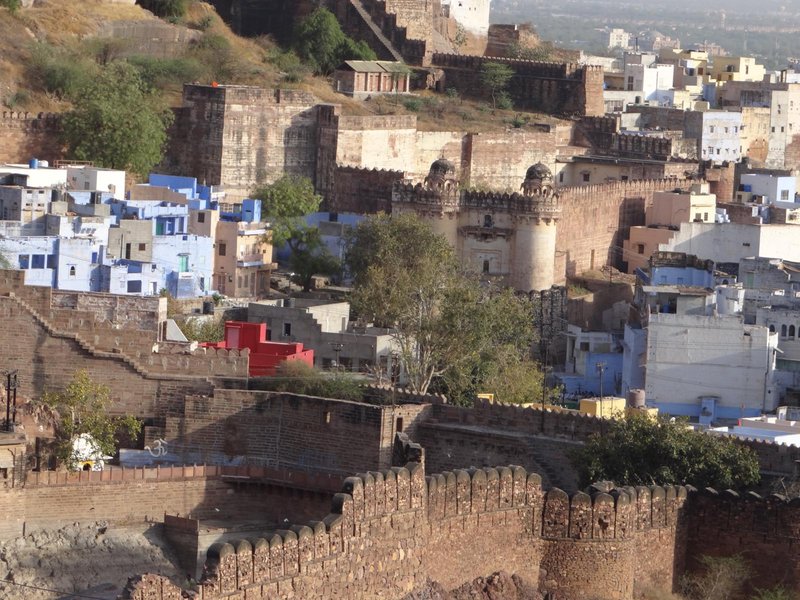 First, you should learn about Derek’s history with zip-lining. Although Derek was injured during his first zip-lining attempt in Costa Rica, this did not deter him from trying again! His first try involved him almost being thrown from the zip line, and the line ripping through his swim trunks through his pants thus producing a massive, bloody scratch along the side of his thigh. The swim shorts were torn from top to bottom, but he was determined to keep going!

Zip-lining through the Mehrangargh fort and surrounding hills was amazing! The Flying Fox staff was thorough, ensured our safety, and were a lot of fun! I betcha didn’t know that some of the new Batman movie was filmed here! Derek’s thigh was spared but he did not leave unscathed. Due to the shoes provided for protection being too small, the shoes bloodied his already beaten toe nail beds. In addition, his protective glove was too worn therefore his hand became a little raw when trying to stop on the very last zip-line. The staff was great and tried to provide bandages and rubbing alcohol but the bandages were super dirty so we had to clean and disinfect his wounds elsewhere.

We were fortunate to meet another couple during our ziplining adventure, Claire and Morton. They were travelling for 3 whole months in India! They were from Ireland and coincidentally Claire was a nurse and Morton was also involved in something only Derek could relate to (yup… I still don’t get what Derek does). We all decided to have dinner together so we walked throughout Jodhpur, miraculously stuffed ourselves into a rickshaw, and headed for Claire and Morton’s hotel. Their hotel was HIGH CLASS compared to the places we are used to! Morton was incredibly pleased that we were able to utilize his super-stocked first aid kit, and we were able to fix Derek up in the gorgeous and spacious bathroom in Claire and Morton’s suite. We had a wonderful dinner and great conversation about everything from finance to nursing to India to Claire’s current stomach sickness. We really enjoyed their company!

We were having trouble finding a rickshaw back into town but Morton was kind enough to run around his hotel and try to organize a rickshaw driver. Also, because we were having such a great time we lost track of the time and realized that we wouldn’t have time to research and book a room in Jaisalmer. But Morton was kind enough to find, email, and reserve a place for Derek and I for the next day! WOW! Morton and Claire’s kindness and generousity with their super-stocked first aid kit, use of their washroom, fantastic tour-operator skills, and successful attempt in finding us a rickshaw will always be remembered and appreciated.

It is always great meeting people as awesome as Claire and Morton. Claire – I would love to hear your account on being hospitalized in Delhi (especially being an Irish RN!!) … and I hope you are both feeling much better!

Posted by dariusz 05:14 Archived in India

Jodhpur fort is very beautiful It is a real heritage look Jodhpur is my birth land. I am proud of Jodhpur.

i would have loved to zip line around the building... it's like wonderland and indian jones combined.... not surprised that derek's feet didn't fit the protective footwear... glad you met the nice couple.