After spending a day in Chitwan we really couldn’t wait to get out and finally get to famous Annapurna trekking gateway town of Pokhara. We left early in the morning on a local bus that probably had never changed its brakes in its entire existence and had no suspension to speak of. Every time the bus broke an ear shattering shriek like something out of the dark armies in the lord of the rings came out from where the brakes should be. When the bus hit even the slightest little bump I could feel my entire spine compress making me lose an inch or two of height. It’s a good thing I have some to spare. All this combined with the wildly windy mountain roads and lack of guard rails made for an experience that we promised ourselves we would never repeat again. We’d decided we’d rather spend the extra $10 per person for tourist class and get a bus that has seen a maintenance mechanic sometime this century.

We checked into our room, unpacked a couple of things, and literally 10 minutes after we did that someone knocked on the door of our room. Kristine opened the door and gave out a shriek of excitement as she saw it was our old friend S.A.M (aka Special Agent M) from Colombia and Ecuador! I’m guessing his bionic implant satellite linkup told him we had just arrived. OK, so in all fairness we did in fact plan to meet up that day, and we did tell him where we’re staying, but the exact timing was just too impeccable to be coincidence in my mind.

S.A.M came in bearing all kinds of wonderful gifts and reassurances to help get us prepared to do some hiking in the Himalayas. He had just done a circuit that should take 21 days and added a 12 day hike on top of it, except he did in less than 20 days for the whole bit. We were not surprised. He reassured us that the hike we were planning to do, the Annapurna Base Camp trek, was far easier to navigate then the one we’ve all done together in Ecuador and that we really didn’t need a guide or any type of other help as long as we prepared well. He also suggested 12 days was overkill and we could easily do it in 7 or 8. We felt much better about the whole undertaking after talking to S.A.M since he’s seen us in action and knows our abilities or lack thereof.

S.A.M also brought us some practical things we would need on the hike. The walking stick he used during his hiking which he put 300km (!!) on of steep up and down trekking, he gave to Kristine, as well as his sleeping bag. I got a fleece top and some fleece long underwear which would turn out to be a life saver in the upper altitudes of the hike. There was also a detailed map of the entire mountain range with all the trails marked on it and a smaller guide on how to go through the Annapurna Base Camp trail itself. It was all wonderful stuff and made us feel even better about attempting to do this trek by ourselves! Thanks so much S.A.M for believing in us!

He then took me shopping in Pokhara for a sleeping bag of my own when he used his magical negotiating skills to get me a great deal (my guess it’s the convince-O-ray implanted in his left eye). The last thing we did was go to get the actual hiking permits for the Annapurna Region. We left Kristine behind and headed out on the longish walk to the inconveniently hidden permit offices. I’m guessing that the reason they are so badly located and mostly unsigned has much to do with all the agents in town who will offer to get the permits for you for a “small” fee.
As we were heading to the permit office a large dark ominous cloud started coming in and we heard thunder. Then the wind picked up and we saw all the signs on the sides of the street being pushed over and thrown around and the store owners quickly closing their windows. Hmmm, we thought we’d better find a place to hide. S.A.M quickly located what looked like a little cement cubicle near a tall cement wall and we hid in there just in time as the torrential rain started coming down in buckets.

We shot the shit and chatted for a few minutes and then all of a sudden we heard a voice behind us.

We looked around and we realized we were standing in front of army barracks and there was a guard behind the wall in a similar cement cubicle holding a rifle telling us to leave. Now, what I would have done is probably apologized profusely and ran hoping I don’t get a bullet in the back of my head. However, S.A.M calmly responded to the man by saying with a smile

“We are not leaving here until the rain stops”

I think the guard was shocked. He just looked at us and didn’t know what to make of the situation so he asked us to leave again, and S.A.M responded in kind again. Then to avoid any further discussion S.A.M turned around with his back to the guard and muttered

I think if I tried a similar thing the guard would have been down there in 2 minutes arresting me, but there is something about S.A.M that the guard knew better than to try to arrest him. Now that’s badass.

The rain stopped shortly after and we proceeded to the permit office. Everything went super smoothly once again thanks to S.A.M’s advice as he guided me step by step through the convoluted process involving two different building and two different agencies basically both doing the exact same thing. It’s all just a money grab but if you don’t get both sets of permits, one of the agencies is going to stop you from hiking the trails.

We were now ready to hike the Himalayas thanks to all of S.A.M’s indispensible help! However, before we would head out into the mountains we had one more place to visit. The Pema Ts’al Sakya Tibetan Buddhist Monastery located between Pokhara and the start of the hiking trails where Kristine’s friend Elizabeth is teaching Monks English. However that’s a topic for the next blog. 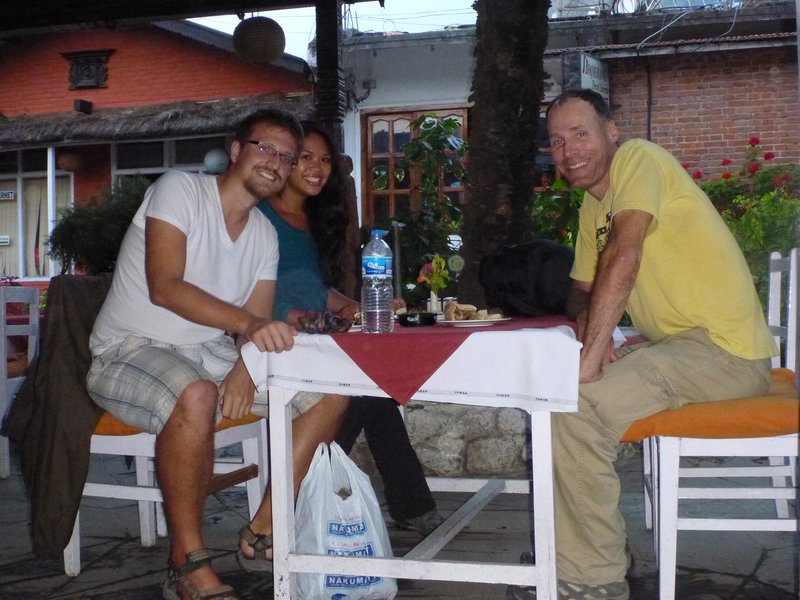 Posted by dariusz 06:29 Archived in Nepal

so finally i see the all mighty S.A.M.

I am glad some one is looking out for you guys.

lol I think S.A.M adopted us