Lets just take a walk into the heart of the Himalayas

We had left our big bags at the Monastery with Elizabeth, said our goodbyes, and took the taxi cab Lekshy had ordered for us the day before to Nayapul. It was 6 in the morning and it was a good 45 minute ride which left us plenty of time to ponder and think about what it was that we were about to do. We had taken just our little day packs, no more than one change of clothes each, some sleeping gear, some oatmeal cookies and granola bars, some medicine and some other small but indispensable items. This was going to have to be all we make do with for the next 8 days while trekking the trails in the Himalayas! The thought of that was exciting and a little scary at the same time. If I had allowed myself to contemplate the entire undertaking I would have gotten overwhelmed. The key is to take it a day at a time and that’s how we approached it. If we don’t get all the way to the top, that’s OK, we will see and experience what the elements and our bodies allow us to and no more or less than that. The truth is though we REALLY wanted to make it all the way through the trek.

We got out of the taxi near Nayapul and just looked around. Nothing really here, a small Nepalese village down the road, a couple of foreigners sitting with their hiking poles either waiting for a taxi or maybe their guide. We however, did not have this guide person, or a porter, or anyone else to wait for. There was nothing else to do except ask for directions and start walking. I love the feeling I get in these moments. It is a feeling of infinite possibilities, of unknown adventure ahead and no one else to count on except ourselves. 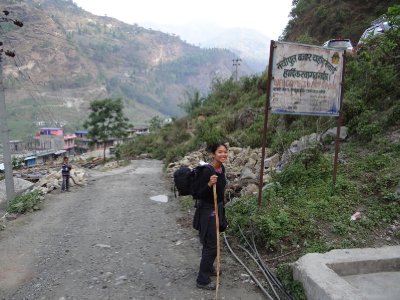 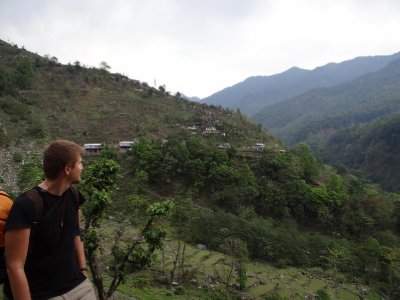 We started walking down the hill quickly passing through Naya Pul and onto our next destination. The nice thing about the Annapurna Base Camp trek is that there is usually a town or at least a store and a guest house approx. 1 hour or so apart. The next town, Birethanti, was only a 20 minute walk away and that’s where we had to present our permits and sign in to the trekking registry. We saw a number of hiking groups heading in the opposite direction which made us feel secure knowing that we could always ask for directions if we weren’t sure which way to go. The permit formalities in Birethanti were a breeze and we were on our way again shortly. This part of the hike was very easy with soft rolling hills and we were making amazing time. If we continued at this pace we would be up at the base camp in no time! Our confidence and spirits were high, and as it turned out, probably the highest they would be for quite a while.

Maybe an hour and half later we made it to a little town called Syauli Bazar, took a rest, and then looked where to go. We saw a tiny sign that said “Ghandruk” which is where we were going, but it wasn’t pointing down the road, it was pointing towards a small stair case. No big deal, it will probably be a few steps up towards another road, and then we’ll be chugging along again. Not quite! It turned out to be just the start of a gruelling hope crushing, muscle and joint destroying 3-4 hour climb straight up. Imagine a stair case maybe twice as steep as a regular building stair case back in Canada, except this staircase has not switchbacks, and it just keeps going and going. Stairs, stairs and more stairs. Will the stairs ever end?? To put things in perspective by the time we were done for the day we had climbed approx. 900 meters vertical. That means measured straight up. The CN tower is 533 meters high. 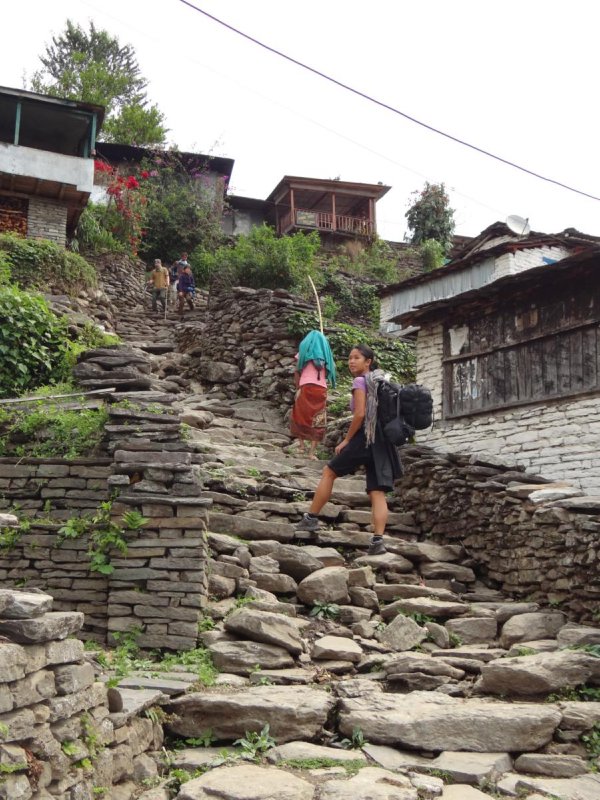 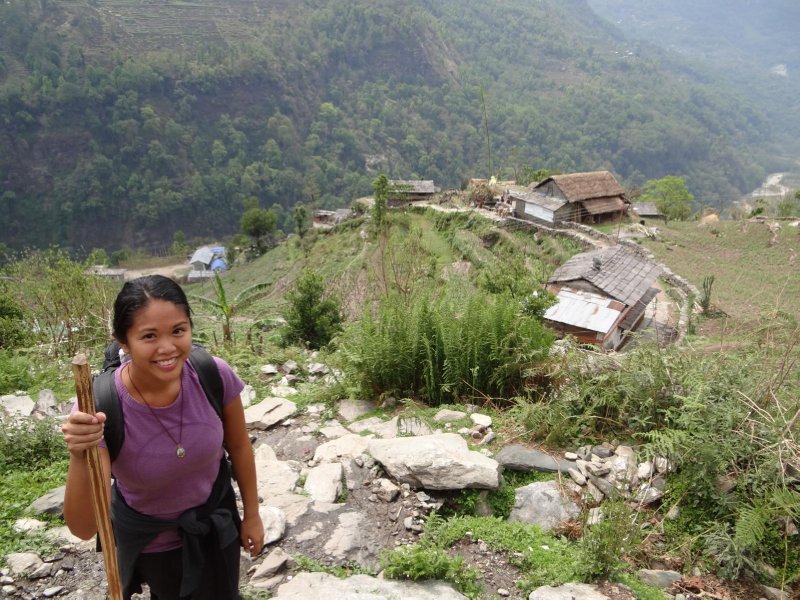 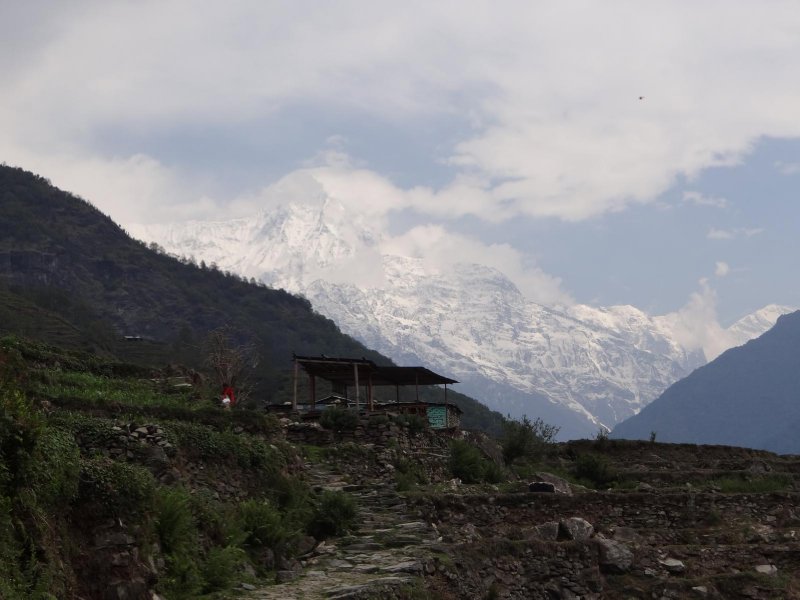 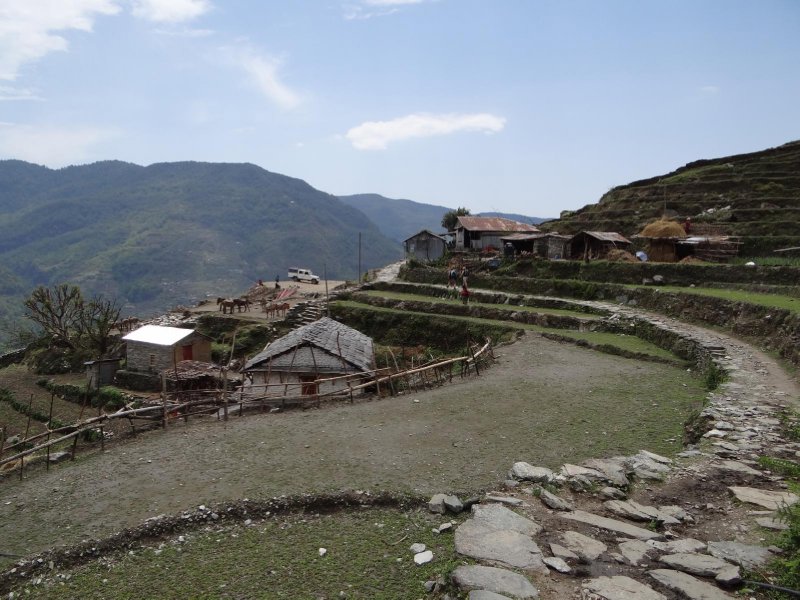 The climb was gruelling but it was also stunningly beautiful passing through little mountain towns with rice paddies overlooking a gaping canyon below us. The people we met along the way were extremely friendly and always willing to lend a helping hand when the path would split and we had to make a decision about which way to go. It was a great introduction to the hike and a great warm up for what was still to come. 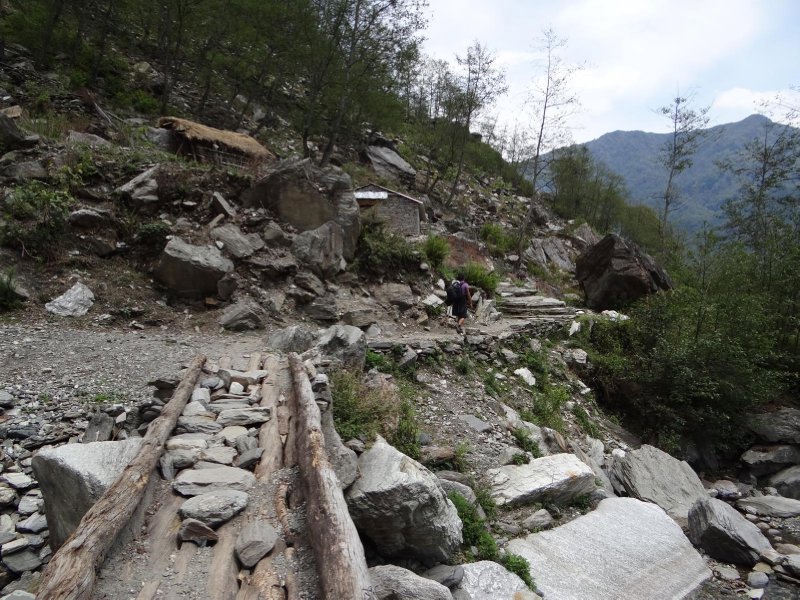 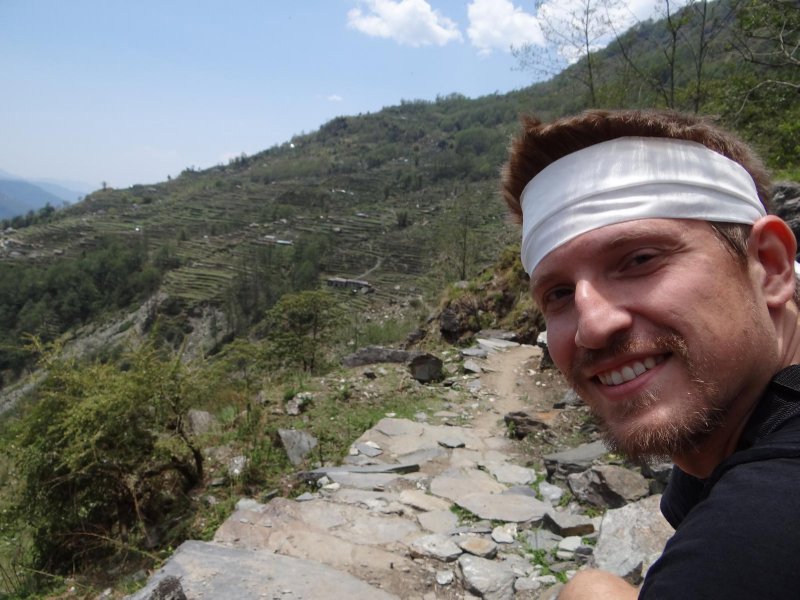 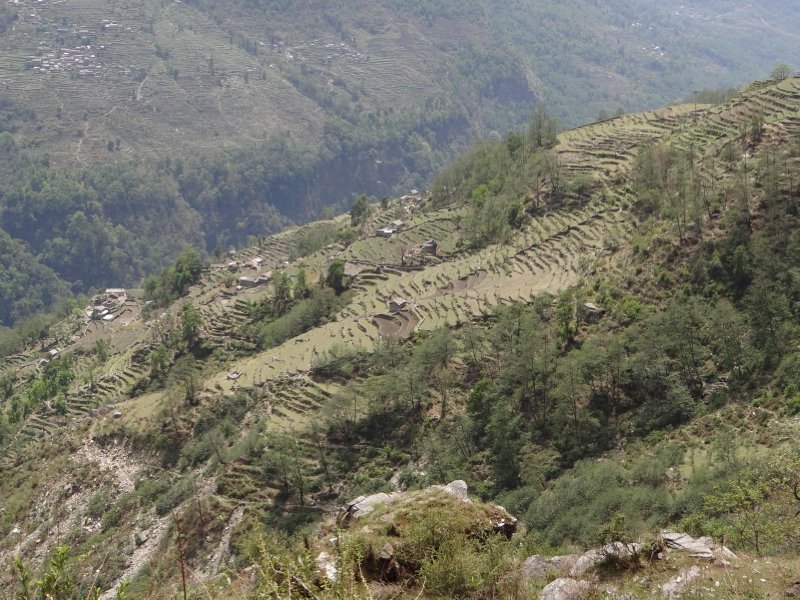 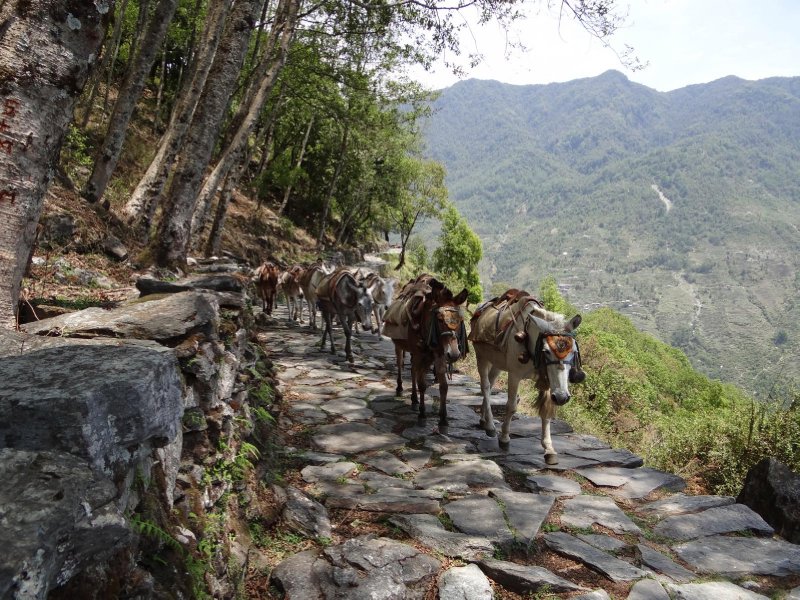 We staggered huffing and puffing into the town of Ghandruk and found ourselves a nice little spot to sleep. The way things work in the Annapurnas is that everything is fixed price and it’s the same price for every guesthouse/restaurant in a given town. You can haggle a bit but it won’t get you much since a room is relatively inexpensive anyway. We are talking about $3-4 per night (200-300 NPR). The owners make their real money on the food, which is also exactly the same price in every establishment in a given town, but they are far less likely to give you a discount there. Generally I wouldn’t like such price fixing but the prices are very reasonable considering the location, which is not accessible by any type of motorized transportation, so there is really nothing to complain about. 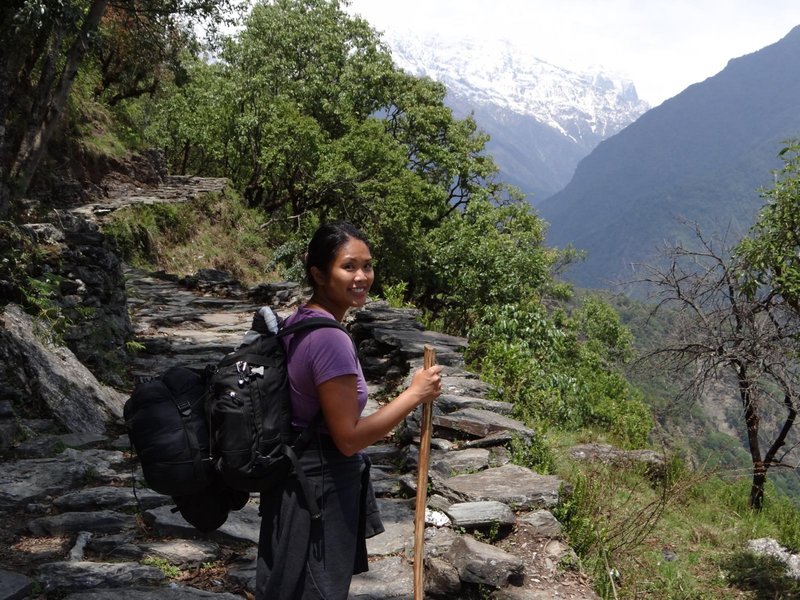 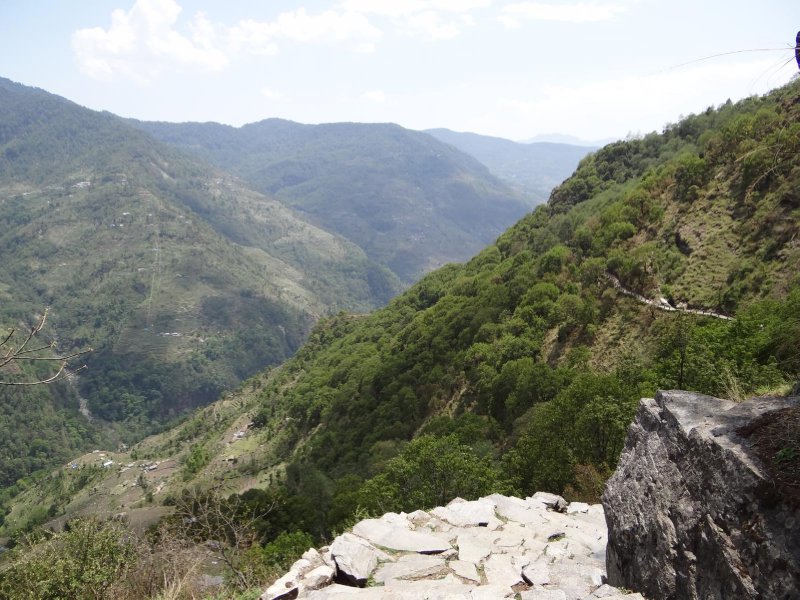 The accommodations themselves are extremely simple. It’s a room with a wooden bed or two, simple hard mattresses, a single light bulb hanging from a wire in the wall and maybe a hook or two for hanging your things. The floors are often not entirely straight and the door and the windows don’t fit their frames with any sort of accuracy. There is no insulation. However, everything is always clean and tidy, which is something Indian hotel owners, with their fancy but dirty everything, could really learn from. I’d much rather stay in a simple but clean place like this and it’s really all a hiker needs to sleep comfortably through the night. 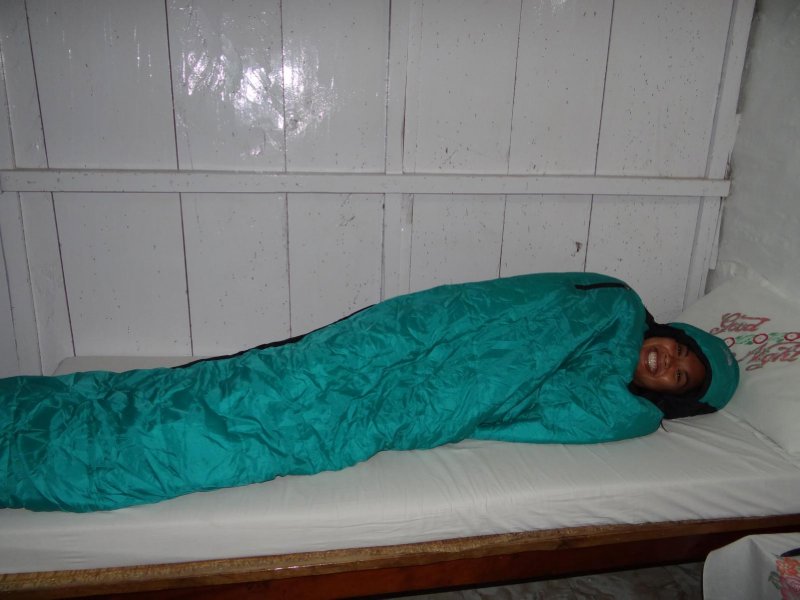 We went to sleep shortly after sunset since we were exhausted from the days hike and needed to get up early the next day. It was sure to be easier from now on wasn’t it?

Posted by dariusz 04:48 Archived in Nepal