The next morning we started early intent on fixing all the issues that have been a thorn in our side up to this point. If there is any place along the whole trail where a trekker can really get almost everything they need it’s Chhomrong. It’s amazing that a whole two days of hiking away from civilization one can get internet access, fresh German baked goods, real purified water and even knee caps. 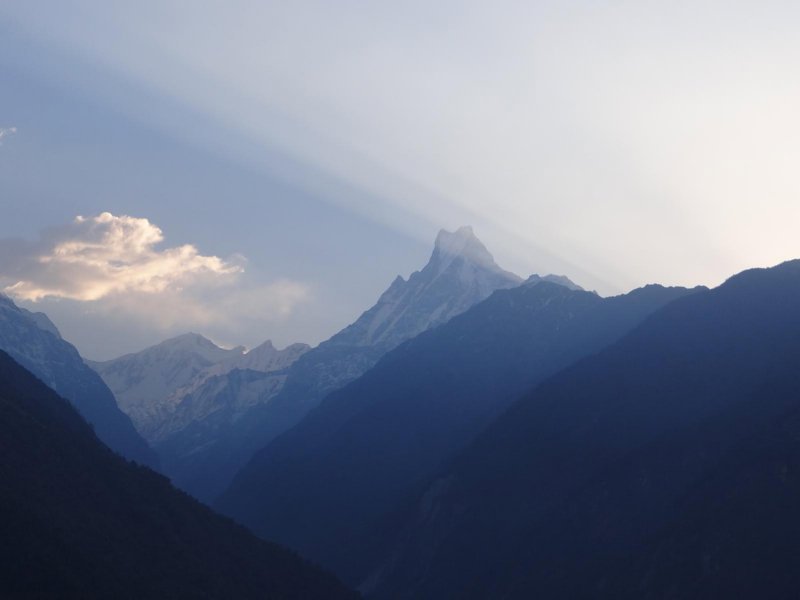 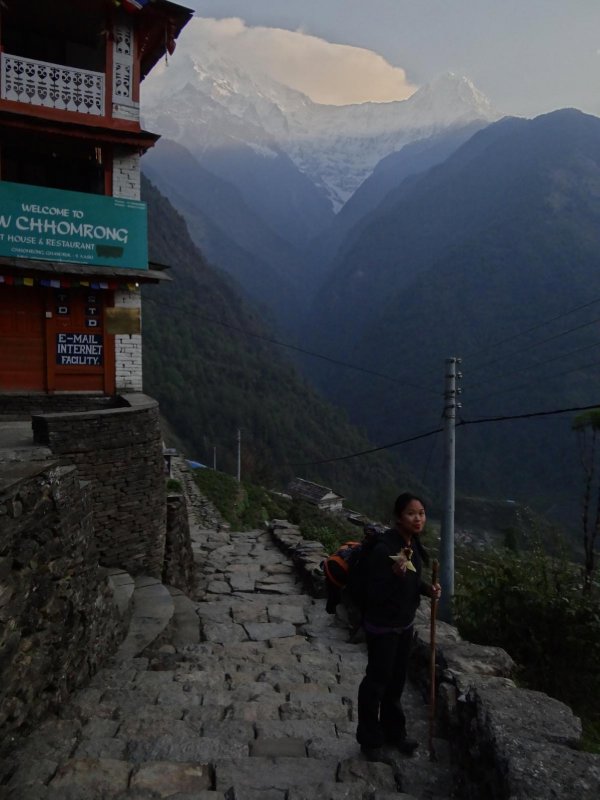 Part of Kristine’s mental breakdown the day before included complaining about a few things we forgot to take, such as our insurance and credit card information, which might be needed in case of an evacuation due to an avalanche. Because yes, we were in fact going to cross a number of avalanche chutes. We used the internet to get all our insurance and credit card info and Kristine bought some knee caps at the local wholesale store for less than $2 each! Even Kristine started feeling really good about our chances now and the German baked goods store was just a nice bonus.

It’s really encouraging and impressive how environmentally aware the Nepalis in this area are despite their relative poverty. There are no water bottles for sale anywhere after Chhomrong, instead the lodges will sell you boiled and filtered water to fill up your existing bottles, and this gives hikers a very heavy incentive not to “misplace” their plastic bottles along the trail. If you lose your bottles you will have no choice but to hike back down to Chhomrong or survive without water between lodges. There are also no donkeys or any other kind of domesticated animals allowed after Chhomrong. This is because at the higher attitudes the donkey/mule feces would take too long to decompose and the trail would end up being literally full of shit. Instead the trail after Chhomrong is an absolute joy to hike being free of both artificial and animal pollution. 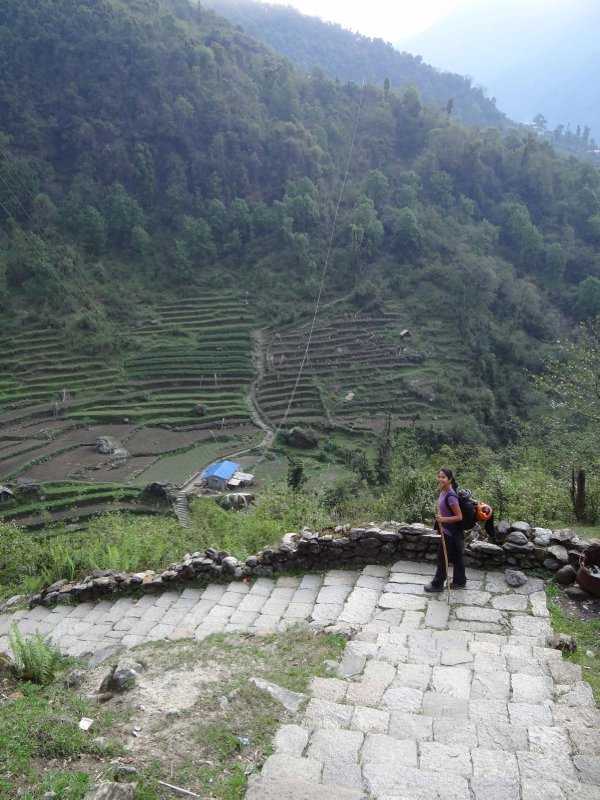 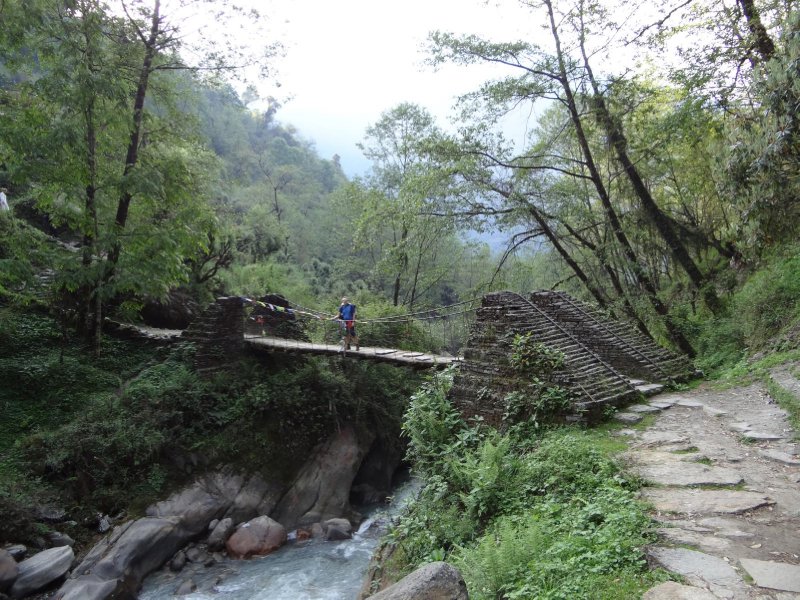 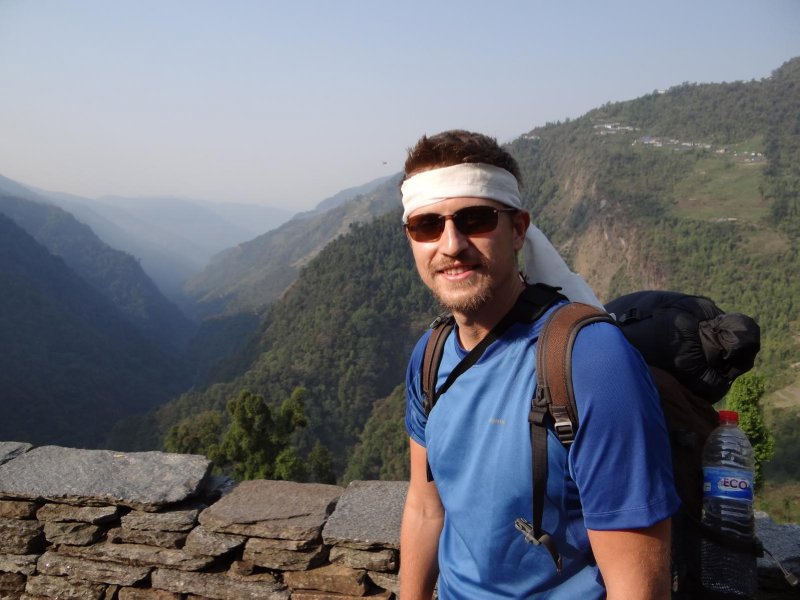 Our spirits high we really enjoyed this days hike. The plan was to see how far we could make it without pushing too hard and just take it as it goes. The ultimate goal was to make it to Himalaya which meant climbing over 1000 vertical metres up and would put us within a day hike from the Annapurna Base Camp, but we decided we weren’t going to kill ourselves just to make a target. To our surprise the trail was actually very green on this portion of the hike despite being higher in altitude. It was filled with gorgeous Rhodedendrum trees, amazing looking vines, monkeys and of course stunning views of the mountains we were about to walk into the heart of. 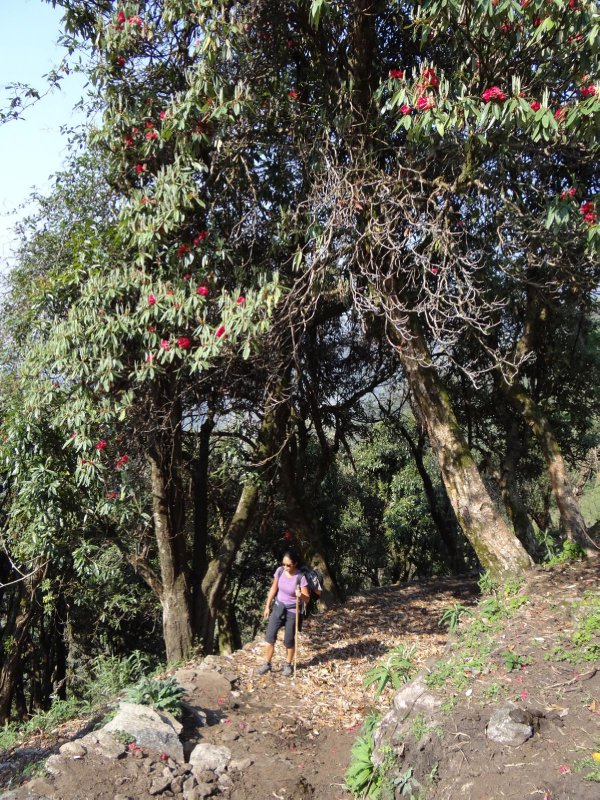 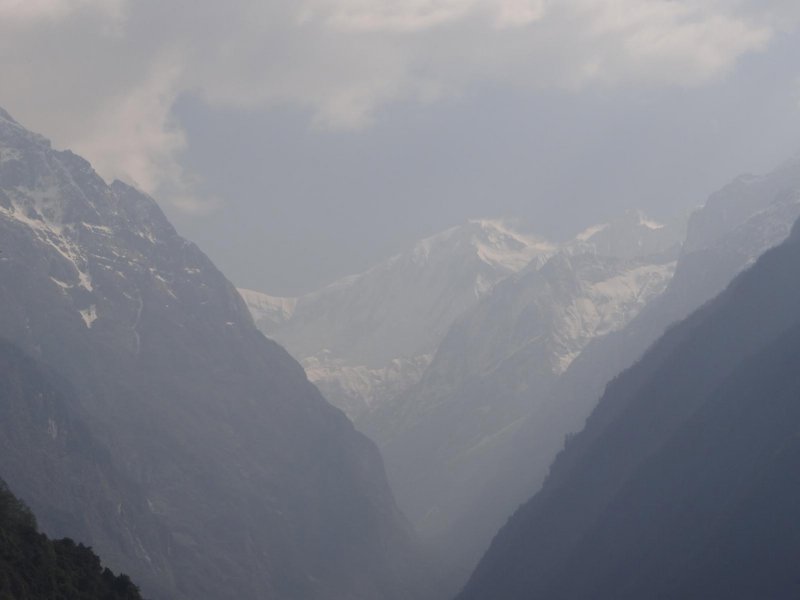 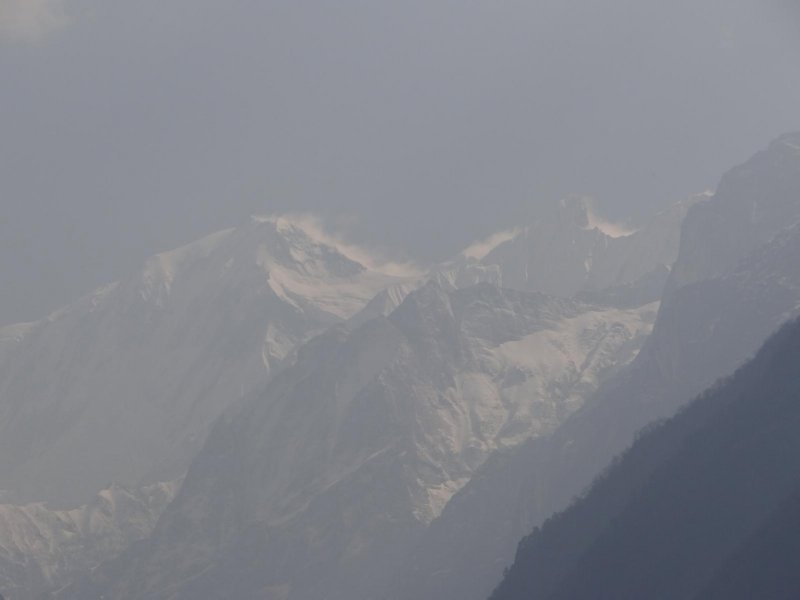 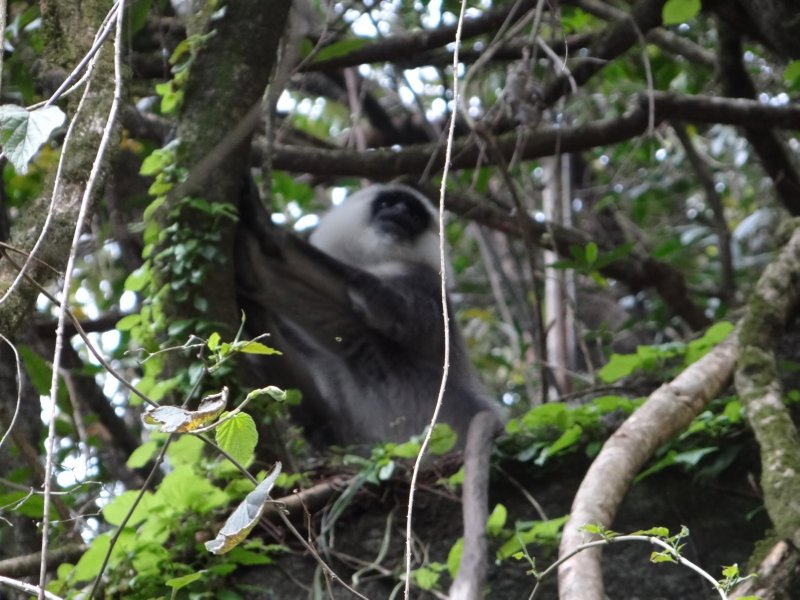 We took our time to enjoy all the views and took a ton of pictures and ended up at Dovan at around noon. We decided that, while we could try to do the hour and a half climb to Himalaya the same day, we would enjoy ourselves far more and risk having another crisis of confidence far less if we called it a day and continued tomorrow. 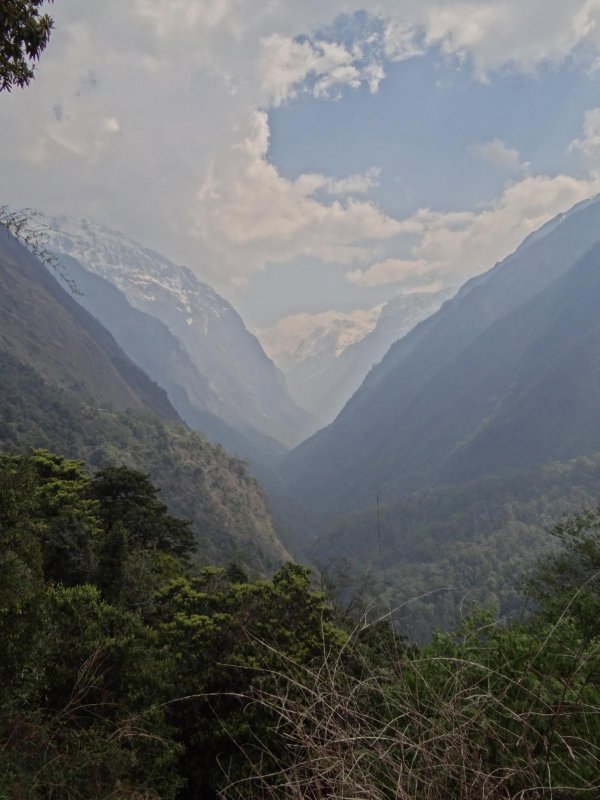 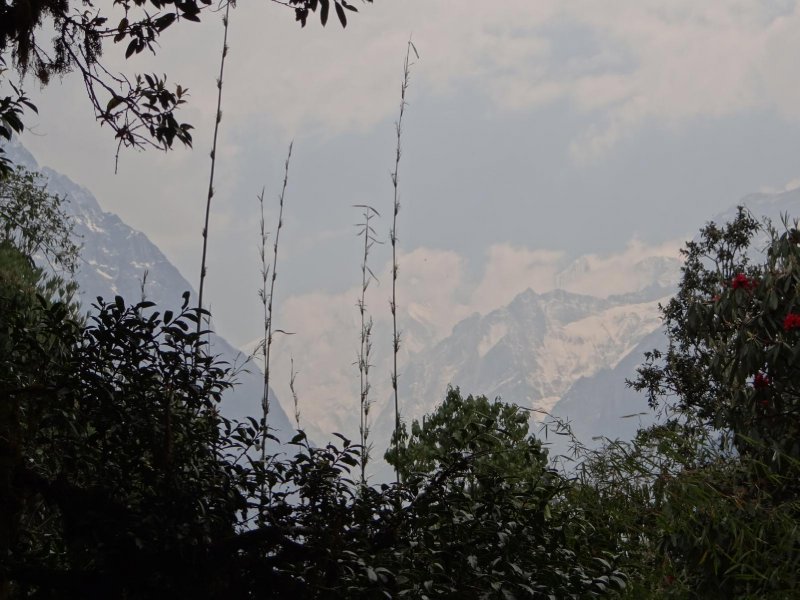 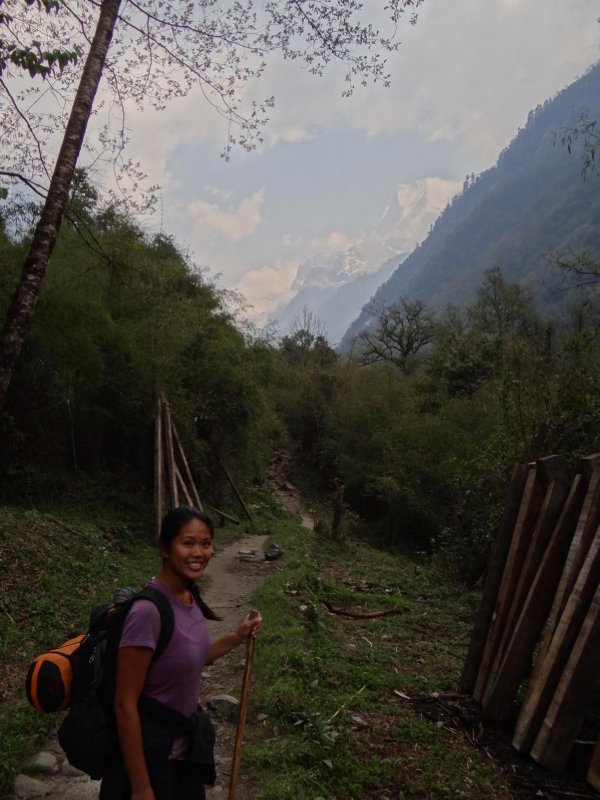 We settled in for the night and quickly realized things were quite different at this altitude. First of all the lack of donkey power means that everything that is consumed has to be brought up by someone strapping a giant basket to their head and carrying it up. As you can imagine this tends to drive up costs and the costs are directly related to the weight of the item. So much for Coca Cola and pop bottles, we were pretty going to have to stick to tea from now on, which given how good Nepali tea is, really wasn’t a problem. The hot shower was also not free anymore as there is not enough sunlight to warm the water using solar power and hauling gas bottles this high up is an issue. I can’t believe someone actually strapped one of those giant gas filled bottles to their back and walked up this trail. I think I would cry if I had to do that.

The whole strapping stuff on your head and hauling it up problem also means there is no heating in the sleeping quarters and the heating in the common area is only turned on if everyone chips in and pays. No central heating around here folks. We were prepared with long underwear, fleece, sleeping bags, sweaters, the whole bit but it was still COLD when sleeping! As we finally fell asleep tightly bundled up to keep warm we did so knowing that tomorrow was not going to get any warmer. 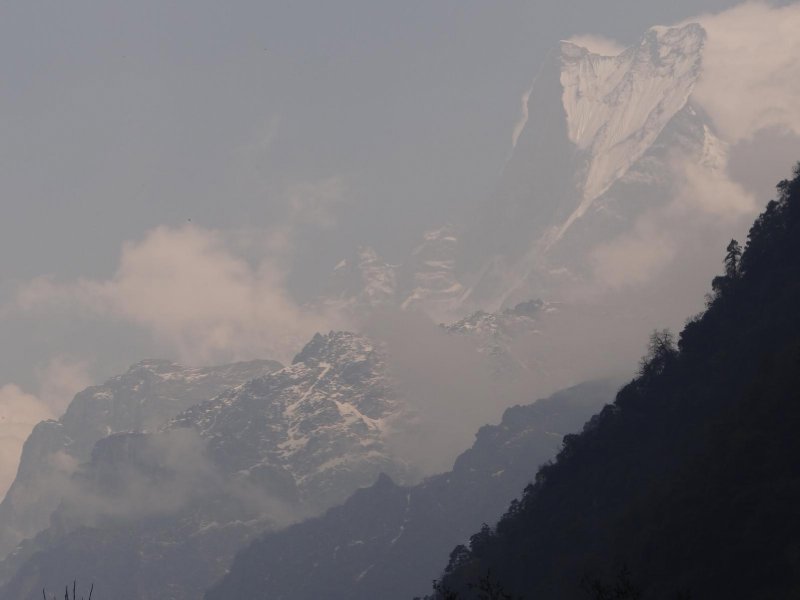 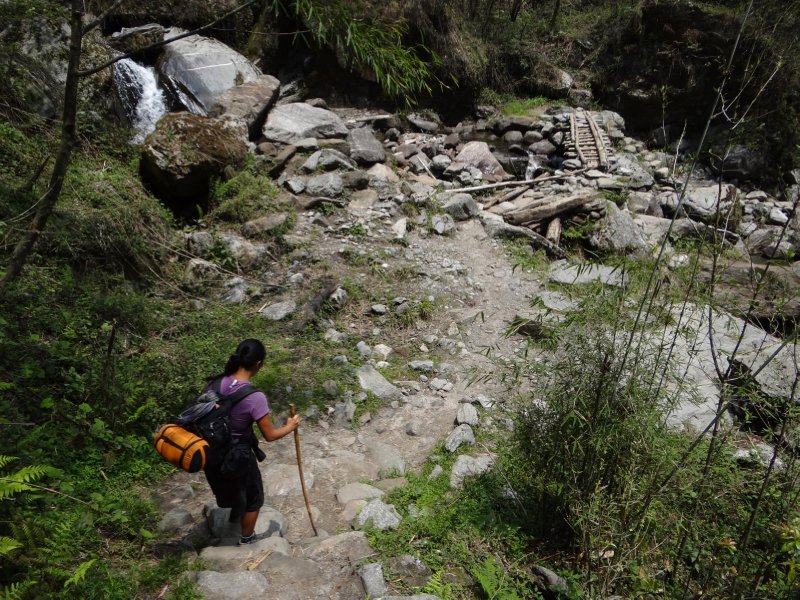 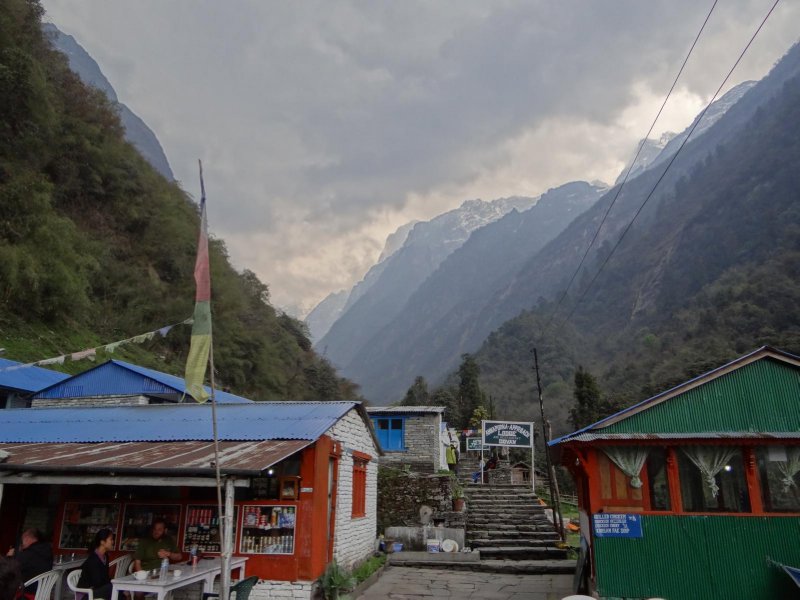 Posted by dariusz 12:58 Archived in Nepal

Really enjoying your travel writing! Inspired to try something similar myself one day. I've heard they are building a road around the "classic" Annapurna circuit. Any experience of that so far?

Thank Tom! We heard they did built a road through a part of the circuit in the north. This can be good or bad depending on what you like. It seems to allow some people to do the most beautiful part of the circuit in 4 or 5 days rather than having to trek for 20 or so. On the other hand, it does take away some of the mystery of the area for the more hard core hikers. If you really want to go off the beaten trail you still have options though, you can always hike into the Mustang!

We actually didn't hike the circuit, we just hiked the Annapurna base camp trail, which is a completely different hike. You can combine circuit and base camp but they don't overlap at all. One finishes, the other starts. We chose to hike base camp because its the more dramatic hike and it goes right into the heart of the range rather than just circling it. It also only takes 7-9 days compared with the 20 for the circuit in its "classic" version.

Hope this helps and you should definitely do one or both of these hikes one day!! Its an AMAZING experience.