The day started with some stunning views of the Machapuchre Mountain or as it’s commonly called the “Fishtail” because it looks a bit like the back flipper of a diving fish. 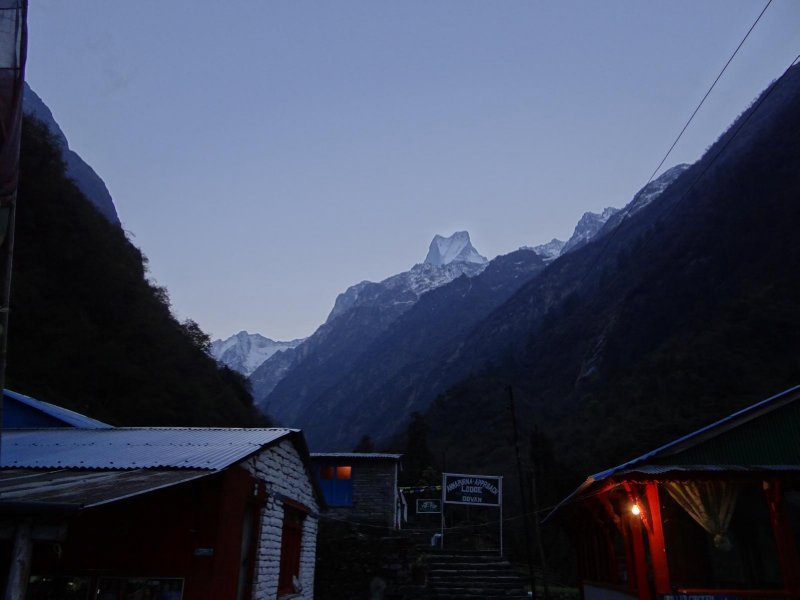 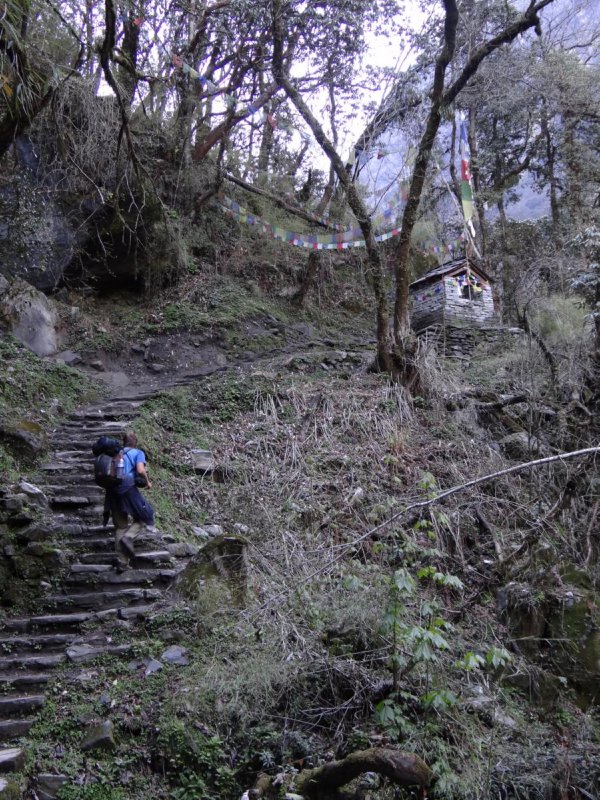 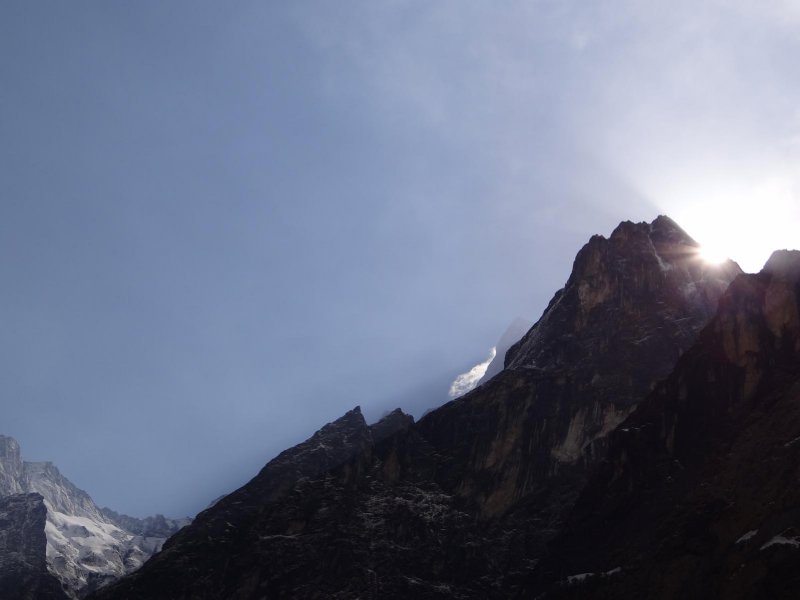 The hike up to Himalaya was a steep uphill and we were very happy we did not try to do it the day before. The down side was that meant we were going to be hard pressed to make it to ABC (Annapurna Base Camp) this day. However, we had decided that if we can’t make it to ABC, then MBC (Macchapucchre Base Camp) would be our minimum goal for the day. Since its only a couple of hours maximum to get from MBC to ABC we could always leave our bags at MBC early next morning and run up to ABC to see the views. Regardless, we knew we had a long way to go, even to get to MBC, and we would be passing through some terrain filled with Avalanche Chutes. This sign reminded us of this fact, as if we needed any reminding: 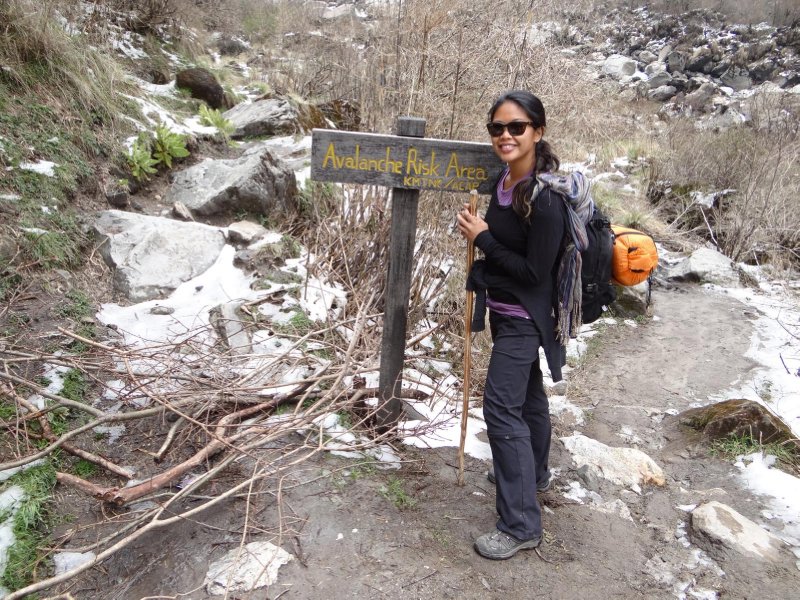 The views along this part of the trail, after we passed Deurali, were some of the most amazing I have ever seen in my life. The trail goes along the bottom of a steep avalanche valley with gorgeous snow peaks on both sides. As you walk down you can feel the adrenaline level go up a bit as you look around stunned at the beauty and power around you. It’s a bit like observing a gorgeous yet dangerous wild animal. You are mesmerized by its beauty but yet at the same highly aware of its power and unpredictability. Its times like this that I just need to post pictures even though I know no picture can truly replicate the staggering majesty and beauty of what we saw that day: 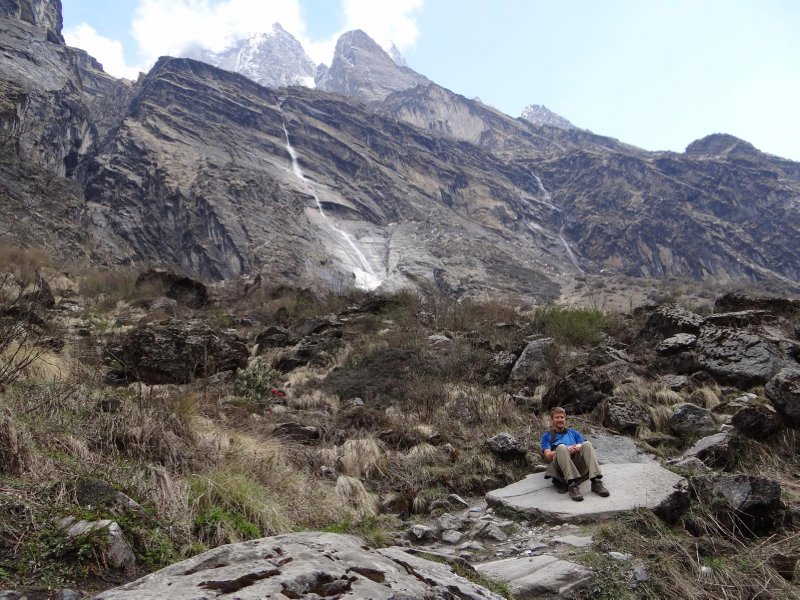 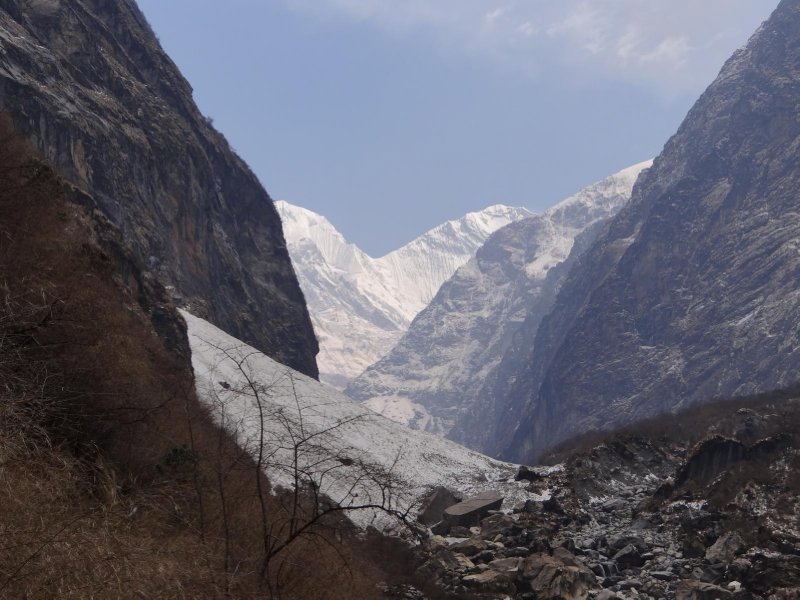 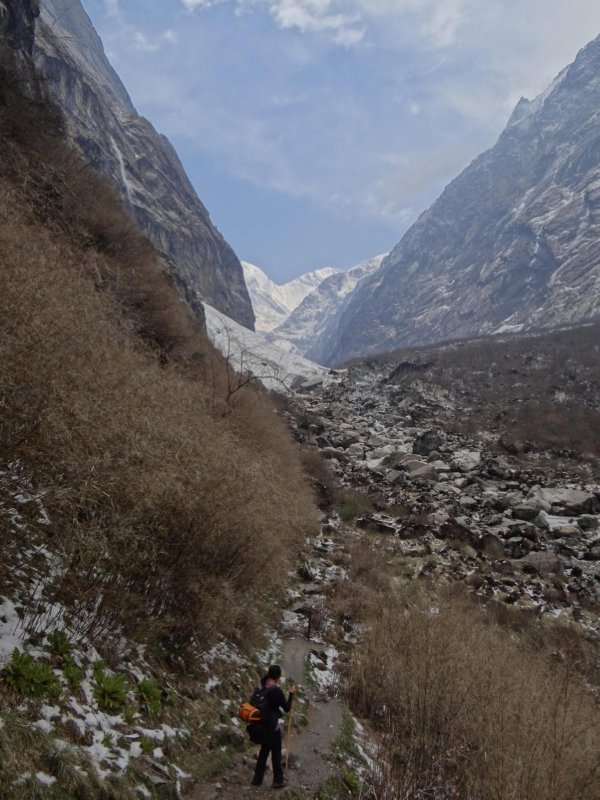 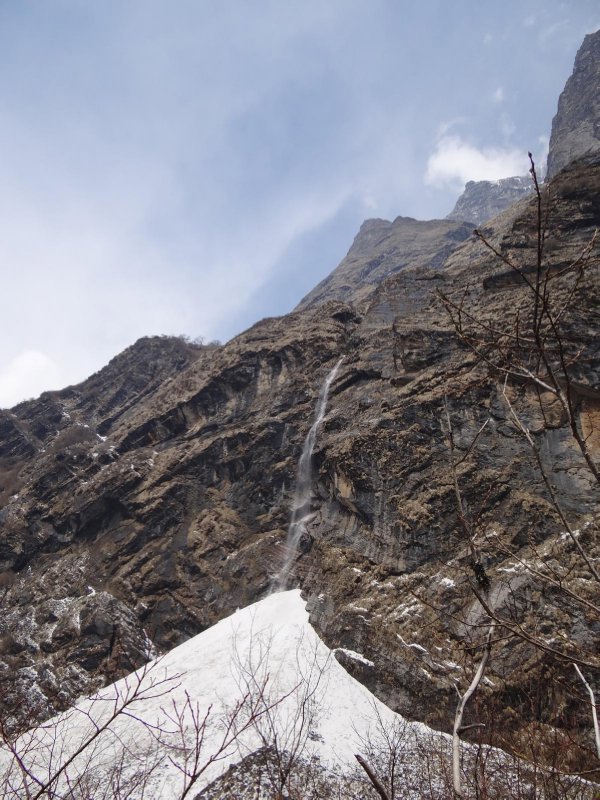 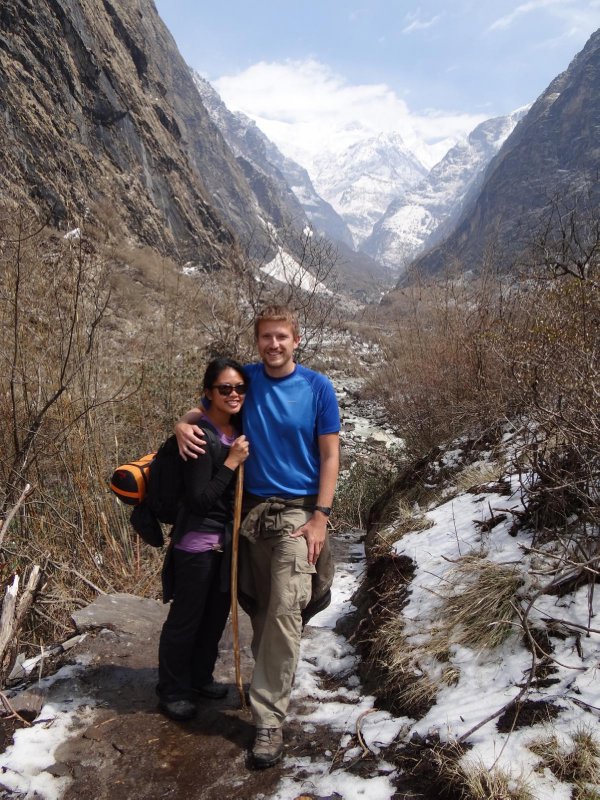 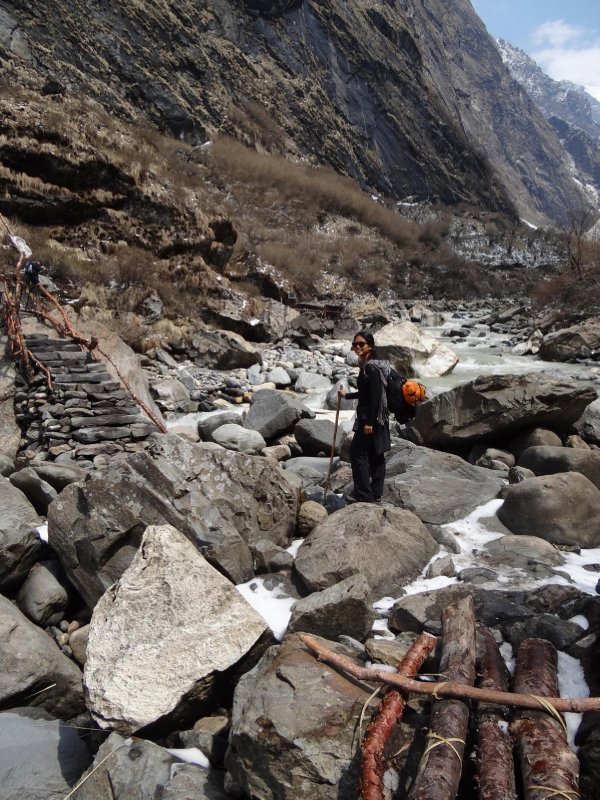 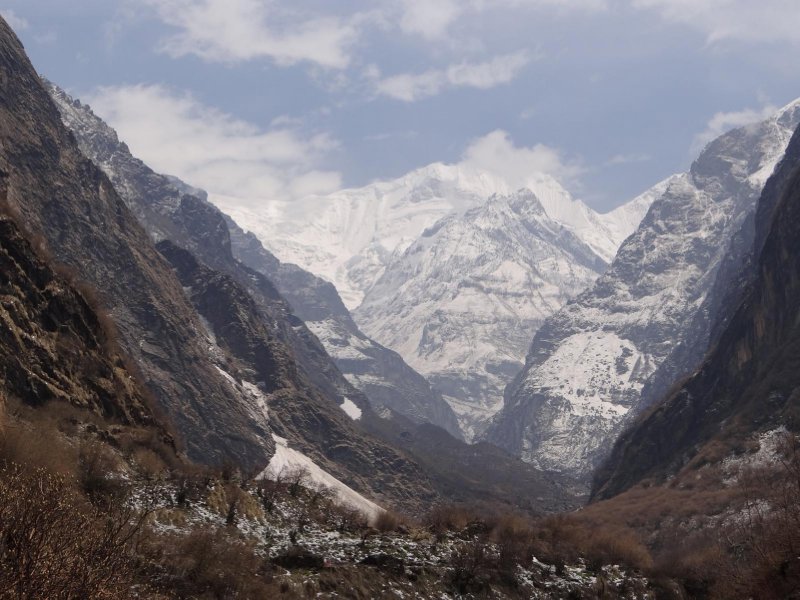 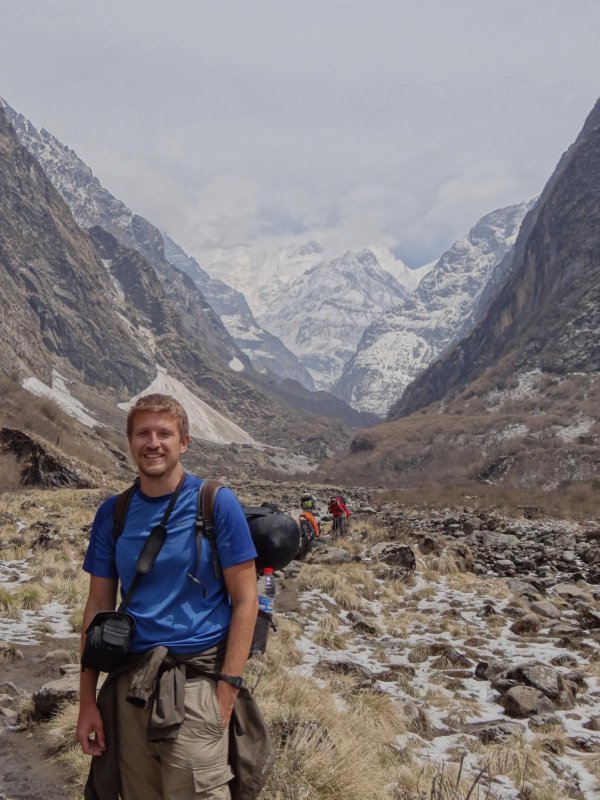 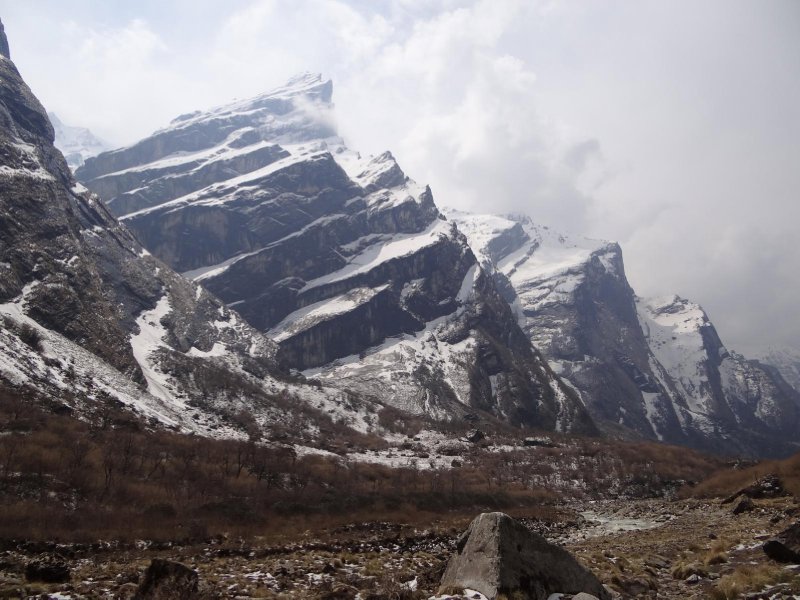 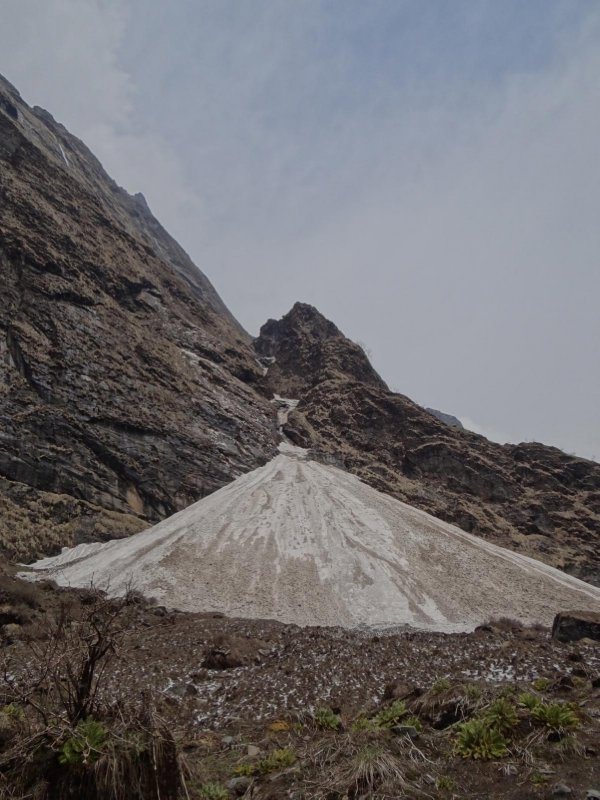 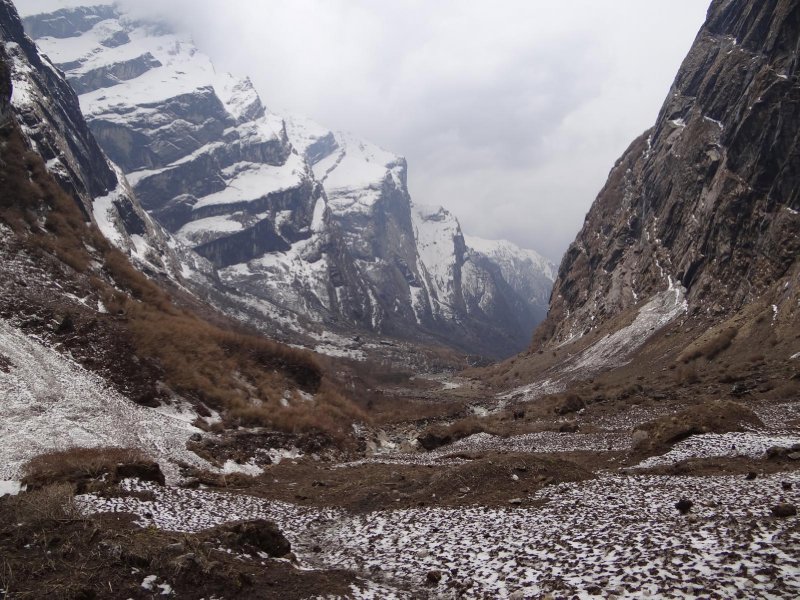 The last part of the days hike was an absolute killer with the worst practical joke ever near the top. The final climb to MBC, where it was clear we were going to end up for the day, was a gruelling 1 hour straight up some rocks covered with mud and snow. Then just as we rounded the last giant boulder we saw the MBC sign and were overjoyed that the torture had ended. We had been following a couple of porters on our way up that last bit but to our surprise they didn’t head towards the MBC building. We yelled at them pointing at the structure, but they just shook their heads and pointed to a trail that led past it. As it turned out this was the OLD MBC, which had been closed up for years, but no one had bothered to take the building down, or even do the common courtesy of crossing the name out! The despair we felt was palatable but the porters reassured us the real MBC was just a few minutes further. Thankfully they weren’t exaggerating and we shortly got to where we would end up spending the coldest night of our lives. 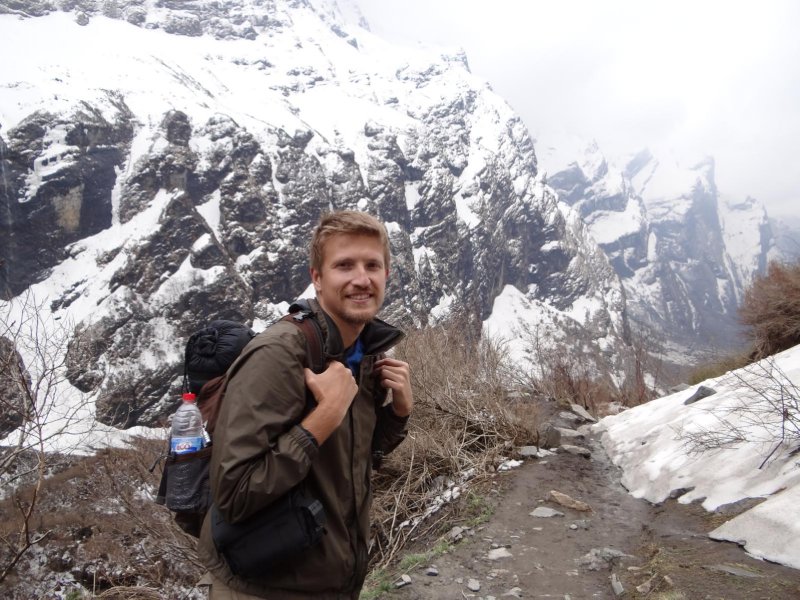 When I say COLD, I mean COLD. Yeah I know what all you Canadians are thinking. Pfft, what’s -2 degrees, or even -5. Its nothing! Oh Yeah? Try sleeping in that temperature outside! Because that is basically what you have to do when you sleep at MBC. They have rooms with beds of course, but there is absolutely no heating and absolutely no insulation. The gaps between the windows and window frames can easily fit my thumb, and the gaps between the door and the door frame were big enough to fit an elephant. OK, maybe not an elephant, but that’s exactly how it felt! It’s hard to describe how cold -2 can feel if you’re trying to sleep in that type of accommodation, but we bundled up in everything we had, 3 pairs of socks, 2 or 3 sweaters, sleeping bags and even extra blankets from the hotel, and we were just barely warm enough to sleep. Outside there was a blizzard dumping multiple feet of snow obliterating the trail we were going to have to walk tomorrow. We decided to give others a chance to blaze the trail for us (usually people leave around 4:30, but we figured with the weather, most would wait until light) so we set the alarm clock to 5am and went to sleep.

Posted by dariusz 13:23 Archived in Nepal