In the minds of the western world the word “Saigon” conjures up images of debilitating heat and humidity intermingled with chaotic street life complete with exotic scents and scenery. The good news (or bad if you’re squeamish) is that it’s all really still there, authentic as ever just made much more accessible to the average traveller. Vietnam in general is a really a wonderful country to visit for a backpacker, extremely well organized, relatively clean and amazing value for just about everything. Saigon itself is often put in the shadow of the capital of Hanoi but we found it to be more interesting and entertaining as well as much cheaper for tours. 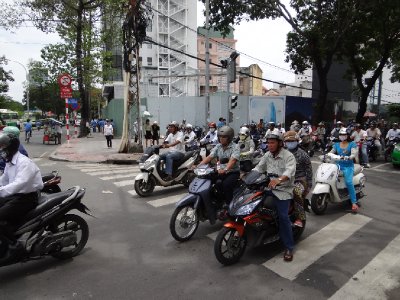 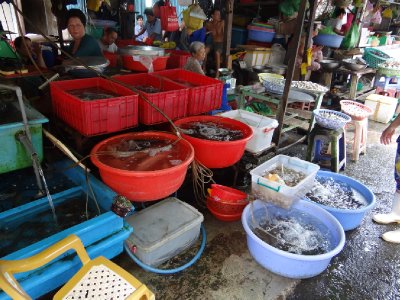 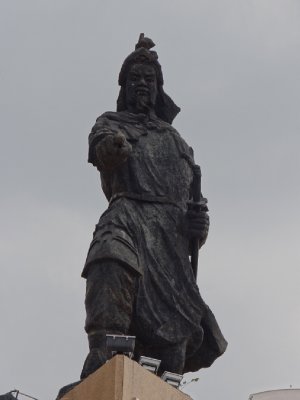 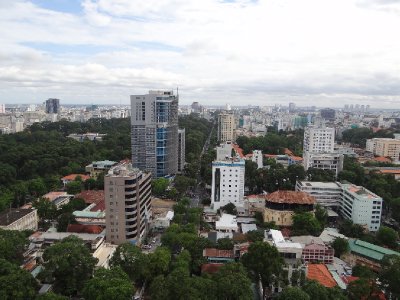 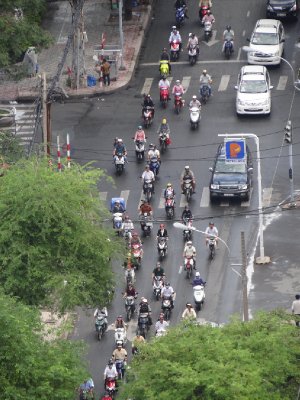 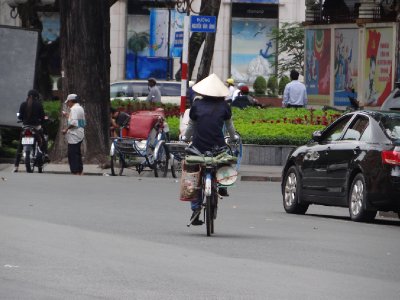 I keep using the word Saigon, but if you look at a current map of Vietnam, you will find no such city. The city is now officially called “Ho Chi Minh” city after the communist leader and national hero whose image you see sprinkled throughout the city in painting, posters and statues. 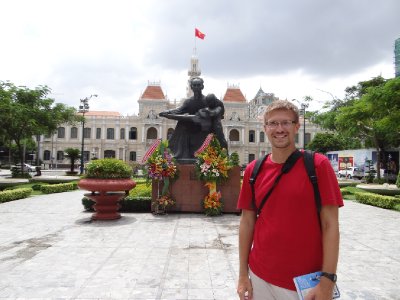 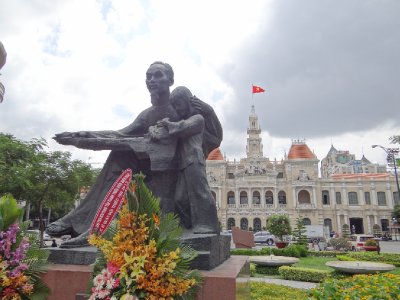 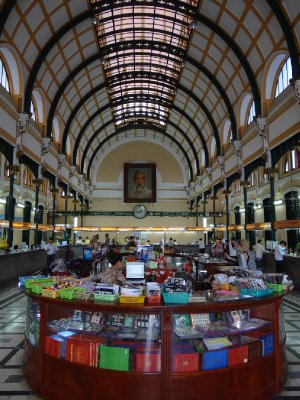 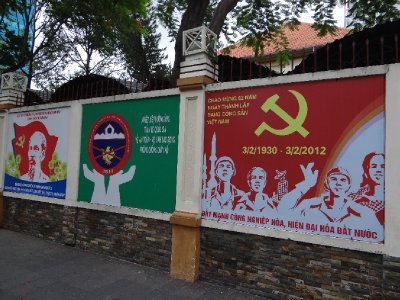 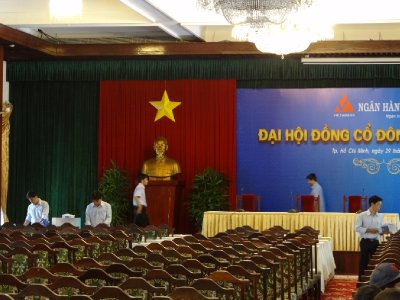 However, the locals still stubbornly call the city Saigon and are defiantly pro-American and pro-capitalist. You can see this the second you land in the airport where the official change counter is called “Saigon Money Change”. Then when you drive to your hotel you see multitudes of store fronts with names such as “Saigon Café” or “American Style Clothes/Furniture/etc.”. Lastly when you talk to the locals you learn that the divisions between South and North are still very much alive and people here are in a majority still anti-communist.

The history of Saigon is fascinating as it is here, or rather in the surrounding country side, that the Vietnam War outcome was decided. Most interesting from that perspective is the Cu Chi area outside of Saigon where the VietCong (North Vietnamese Army, “Cong” is the Vietnamese word for communist) had a stronghold and from where they kept pestering and making life difficult for the South Vietnamese and the Americans. We decided to see the amazing Cu Ci Tunnels used by the VietCong for their operations so we booked a WHOLE DAY tour for $10 each INCLUDING LUNCH. How that is possible I really have no idea and to top it off the tour was EXCELLENT. 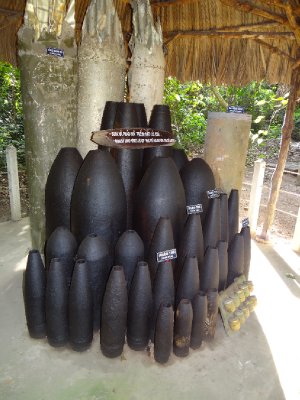 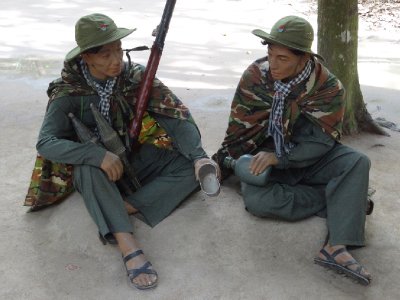 The tunnels were an amazing underground system that allowed the VietCong to appear inside American bases, start a fire or attack a garrison, and then disappear as if vanishing into thin air. People used to live, cook and work INSIDE the tunnels, and there was an entire command system and military structure within them. Once the Americans finally figured out what was happening they did everything they could to either destroy the tunnels or draw the VietCong out of them but to no avail. The Americans were physically too big and the tunnels far too complicated, claustrophobic and booby trapped to be able to fight within them while destroying them from the air was an exercise of frustration since the VietCong just kept rebuilding any parts that were hit. Here I am demonstrating why most American soldiers were not able to go down the tunnels. This is one of the original tunnel openings actually used in the war: 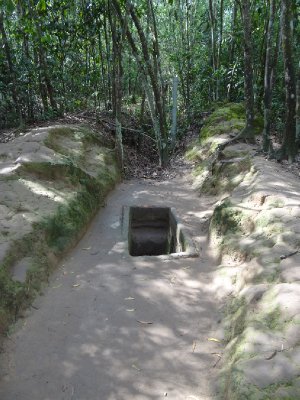 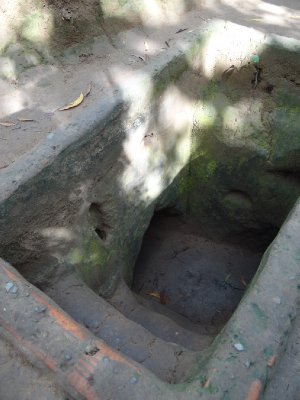 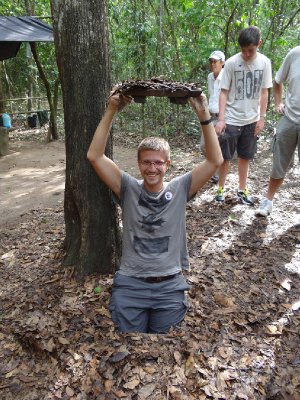 Since most tourists would never be able to go through a real tunnel either because of their size or because of claustrophobia a 4 times larger reconstruction was made. This is me and Kristine within the tourist tunnel. Yikes. 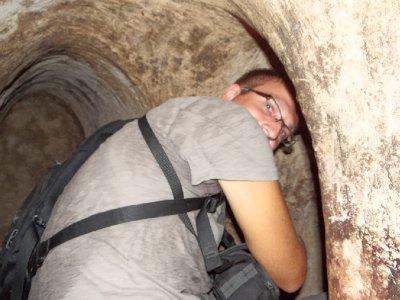 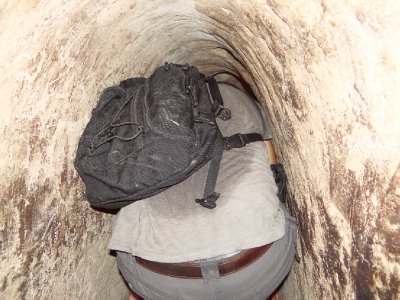 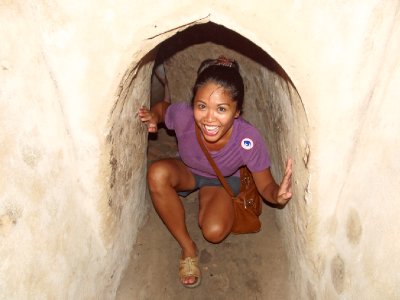 The reconstruction has 5 exits spaced out approximately evenly from the entrance so tourists can decide how far they want to go. We only made it to the first exit and decided it was enough. The tunnel was hot and humid and at times you felt like you were going to suffocate or get stuck in its walls. The tourists were coming out from the first exit drenched in their sweat. I cannot imagine what it must have been like to live, work and fight within the original much smaller tunnels used in the war.

The next stop was a very interesting booby trap demonstration: 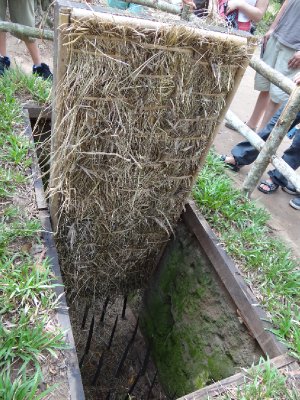 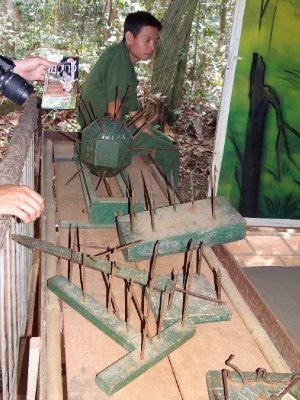 Ouch that must have hurt!

We then got to sit on a victoriously destroyed US tank: 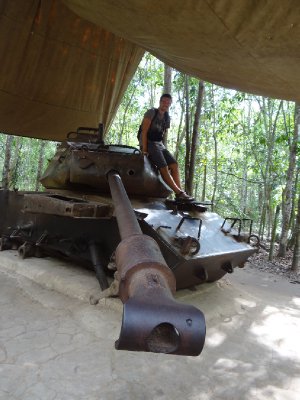 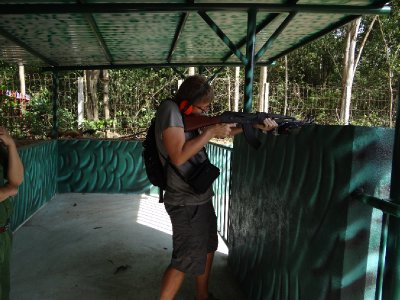 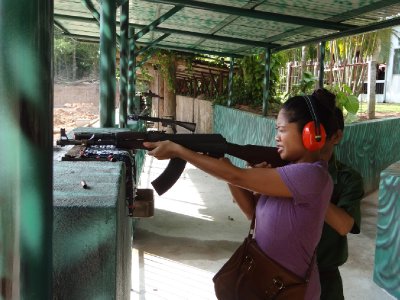 And lastly watch a wildly informative Communist propaganda video (with Granpa Minh watching us) made shortly after the war explaining how the heroic men and women of Cu Chi fought the “American Devils” and won. The tour guide, who fought in the South Vietnamese army as many Saigon people did, turned the video off after a few minutes saying “OK, I think that’s enough”. 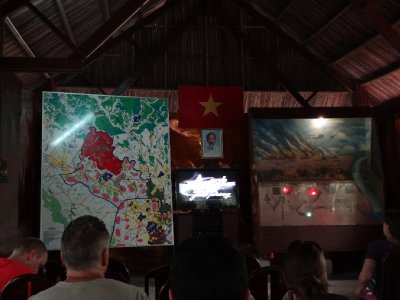 PS. "Stairway" in our hotel 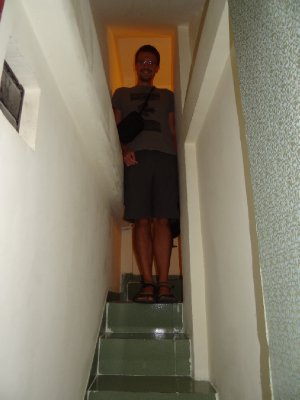 Posted by dariusz 07:25 Archived in Vietnam

Very cool, Miranda's uncle visited there as well and said it was amazing place to go.

i like the way you told the story. i know the man as your guide? Slim Jim? thanks

Sorry Saigon, I can't remember the name of the guide

I'm glad you enjoyed the story though!