Checking out the Coba Mayan ruins in Mexico, Tulum

The Mayan culture is a fascinating one. They left us with many ruins of what must have been an amazing empire with some impressive cities. The Coba ruins conjure up images of indiana jones and lost cities as the site is not entirely excavated and is set in an uncleared jungle. However the main reason to visit these ruins is this:

Yes, that is me breathing that hard, I really need to get in shape before the mountains of Ecuador and Nepal!

Hanging out with the Thind's in Quintana Roo Mexico

All on track again

The last couple of days we've spent hanging out with our good friends Jeet and Kaurey and their two wonderful kids Mika and Veerjeet . We were planning to meet up with them in Mexico anyway, but the meeting took on a whole new urgency due to my streak of bad luck, as they were the only way I could get my Wallet and Camera back without risking shipping those items to Mexico. So thanks to the Thind family I am able to continue blogging and posting pictures, and you know, just generally continue. I can't thank you guys enough!!

It was great fun hanging out with friends from home one last time before leaving the relatively familiar surroundings of Quintana Roo Mexico for some new unexplored grounds. We met up with them at a cool little boutique hotel Las Ranitas in the Tulum hotel zone. Since the beaches are all public and the hotels not stuffy we just walked in, ordered a few drinks, and got to hang out on their beach chairs and equipment. This is the case for most of the places in the Tulum Hotel Zone so I highly recommend doing so!

The Thind family enjoying the beach 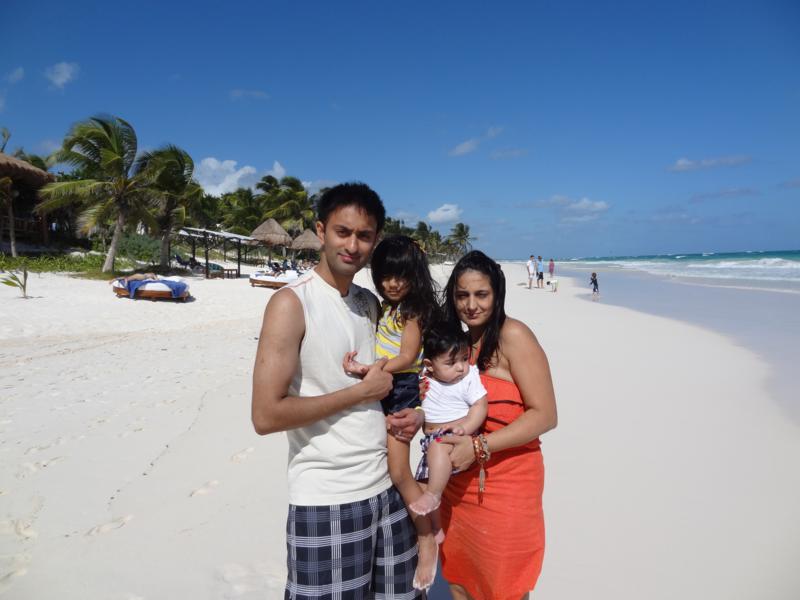 The hotel we were at is very close to Sian Kaan reserve so the beach is left in all its untouched palm fringed glory. 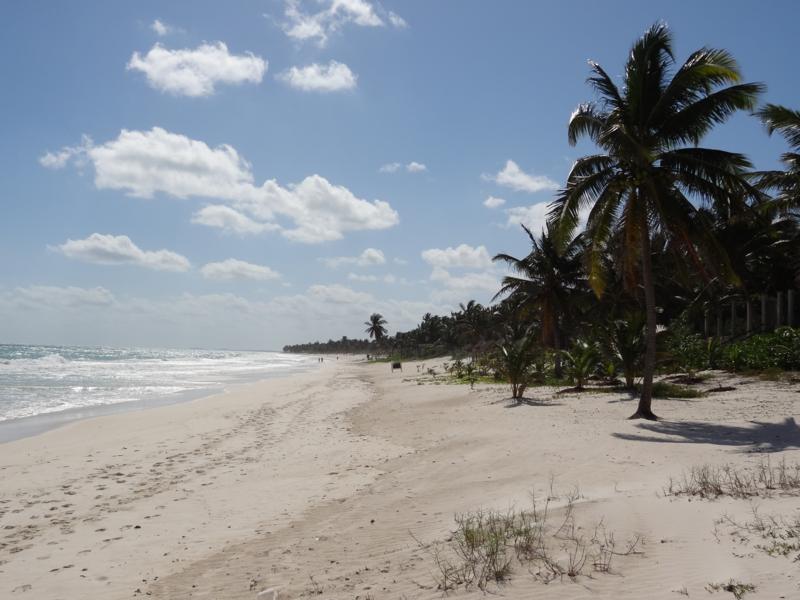 This guy seems to be really enjoying it too 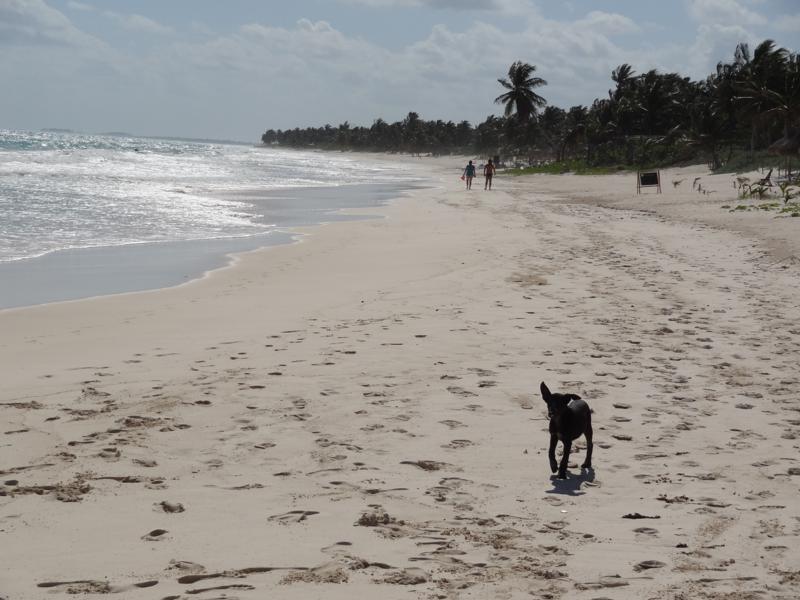 We enjoyed a really tasty lunch at Las Ranitas 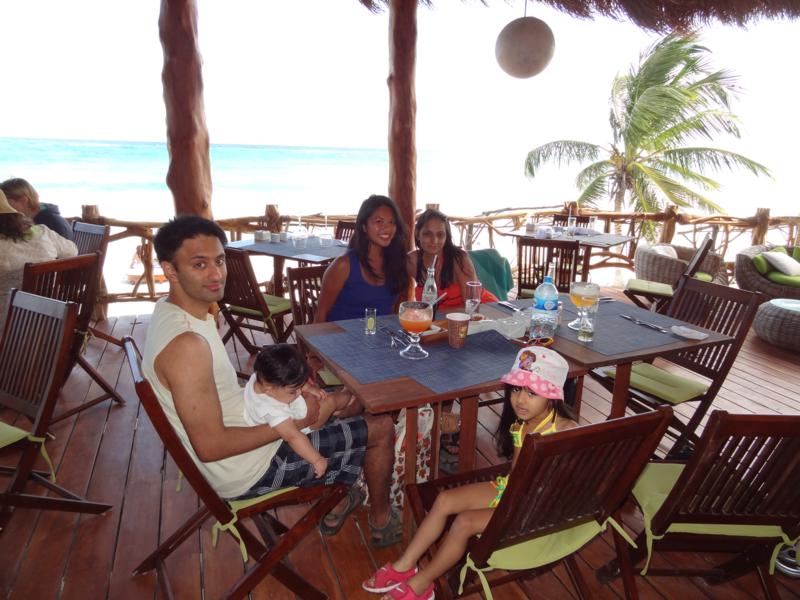 Then took a "stroll" down the beach to work it off. 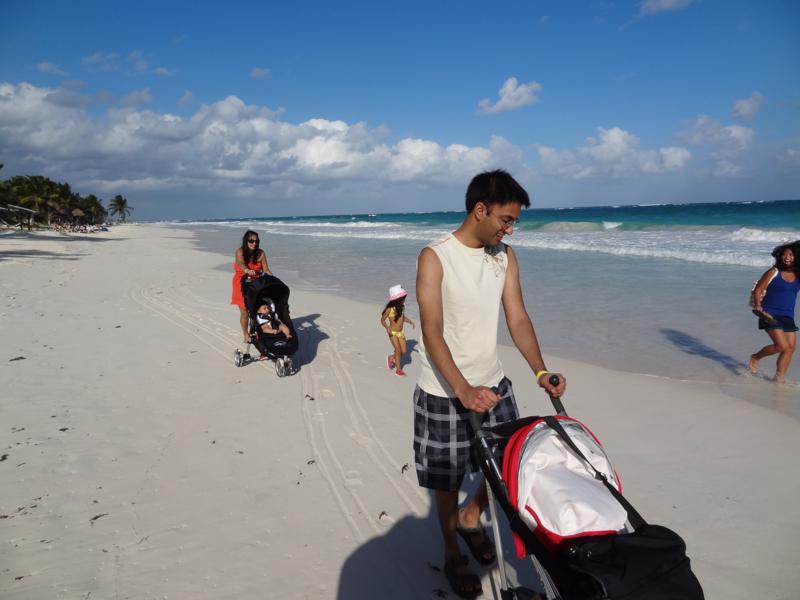 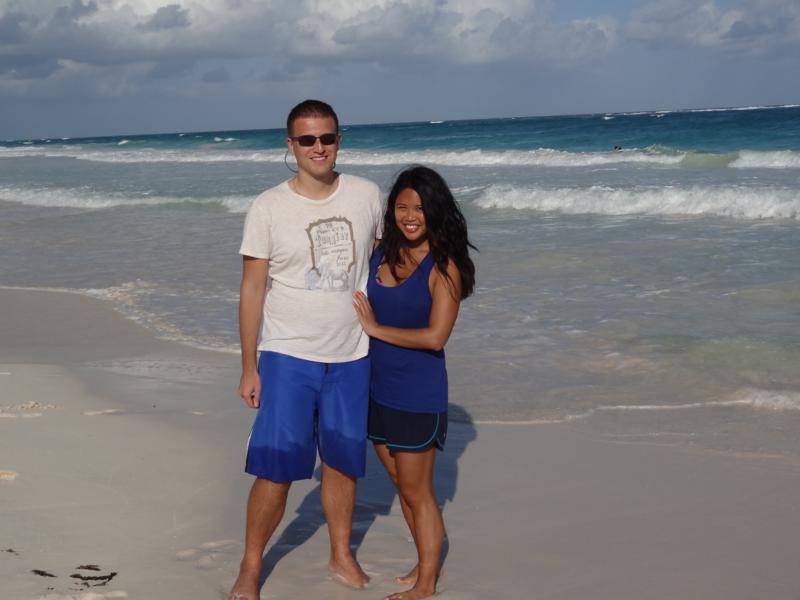 We then decided to switch locations for dinner and check our Charlies in downtown Tulum. Our friends took the sensible approach of taking a cab, but myself and Kristine decided this would be a more interesting form of transportation. 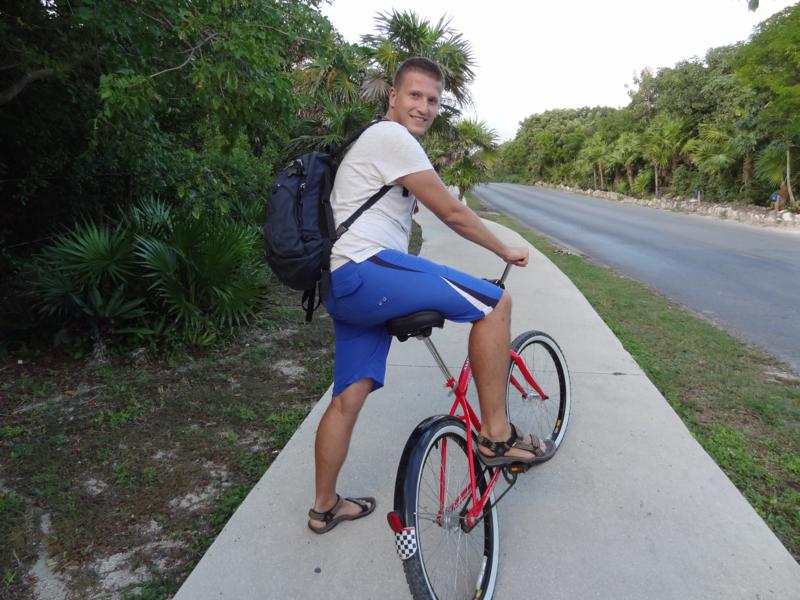 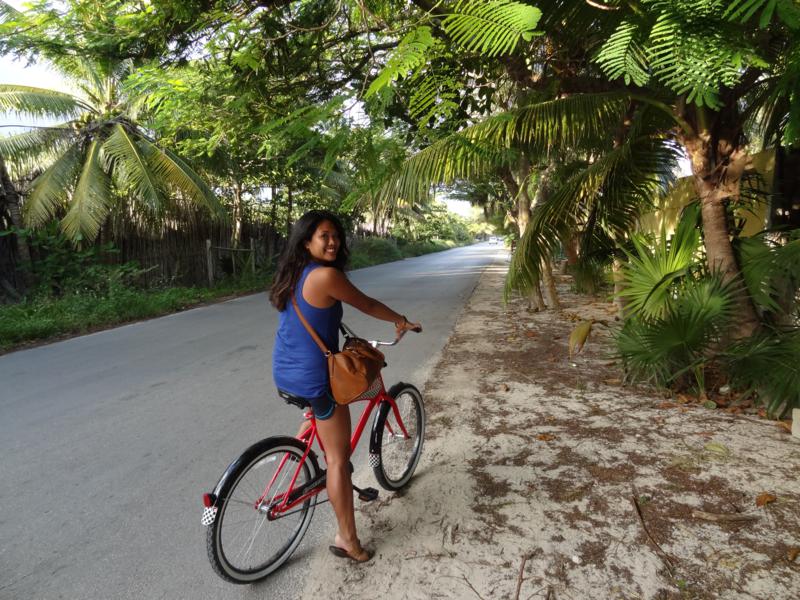 Only 45 minutes later we were able to join our friends in Centro Tulum for some awesome Mexican grub. All joking aside getting around the Tulum area on a bicycle is really the way to go. It's very easy because they've built special bike paths that take you almost all the way from Tulum centro to the Tulum Hotel Zone with all the best beaches.

Today we climbed a giant Mayan pyramid, and tomorrow we're off to Belize, but for more on that you'll have to wait for the next blog post

Why do Cancun or Playa del Carmen when you can enjoy TRUE Mexico in Tulum!!

Authenticity. That's Tulum's selling point. If you don't want all the annoyances of Cancun (aka FAKE Mexico) then check your bags here! 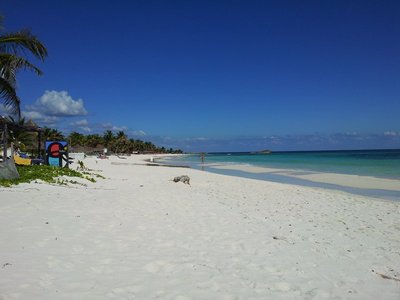 That beach is pretty gorgeous, eh? It's a public beach and stretches for kilometres. Sure you can probably get that in Cancun or Playa del Carmen, but we only had 4 people "hassle" us with mild sales pitches in the 5 hours we were on the beach, loud music wasn't trying to bust my eardrums open (wow I sound like old people but holy cow I guess I am now!), and you didn't have to get up at the crack of dawn to compete for a primo spot on the beach ! 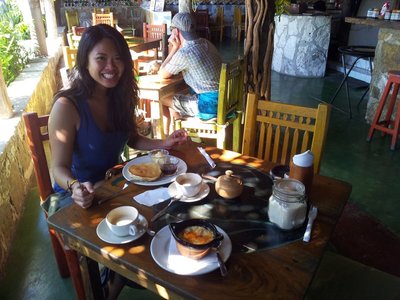 That's right. $5 for breakfast at a SUPER nice restaurant called Charlie's. Apparently the owner built this place with his own hands -- including the tables and chairs! The cappuccino is comparable to any delicious cappuccino in Europe and there's this addictive hot sauce that looks like something I can't describe because only a nurse or a new parent would know what it looks like but WOW this sauce is SOOOOO AMAZING!!! If I could wrap it up and send it back home I would! We've been here 3 times now 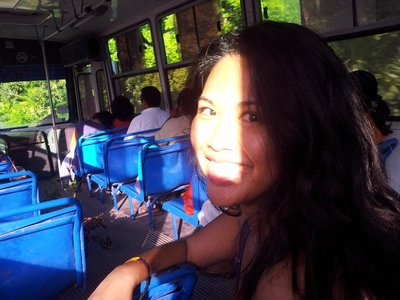 Transportation from the beach to our hotel... a WHOPPING 80 cents (10 pesos) per person!!!! Sure, we took the public collectivo but holy cow it's the way to go! Another cool feature is that you can probably jump out of the bus while it's still in motion because the doors seem to occasionally swing open at random... I'm tempted to do it but Derek might get A LITTLE upset at me

Of course this type of vacation isn't for everyone... but it can be!

I guess it's best to get all the bad luck out of the way right of the bat?

A big part of why anyone does a trip like this is the adventure part of it. I was looking forward to some unexpected situations and obstacles, and it is that we got on our first day.

The day started innocently enough waking up at 3:45am and heading to the airport for 5:20am to be there 2 hrs prior to the 7:20am flight time. My sister dropped us off and we checked in our luggage and were just about to head to customs when the security guard stopped me and asked me to fill in the US customs form before heading further. It was a lucky break, since as I was doing that Kristine realized we completely forgot to take our Dukarol (drinkable vaccine against Montezuemas revenge) and we wouldn't be able to take it through security. We backtracked and I went to Tim Hortons to get buy water to take the vaccine, and it is then I realized I didn't have my wallet!

My stomach sank and I panicked, called my sister and asked her to go home and get the wallet and bring to the airport, knowing full well that she was not likely to get back in time. As I was trying to figure out in my head how it could be possible to ship my wallet safely to Mexico, it hit me, friends of mine were going to be flying to the Myan Riviera in a couple of days so I could ask them to take it since we were going to meet up anyway. Problem solved! Called my sister off from her impossible errand, all is good with the world again.

Got through customs, checked baggage, got to the gate. Waiting. Waiting. Waiting. It's now 30 minutes AFTER scheduled boarding time. I go to ask the girl at the counter, but she beats me to the punch and announces that they had towed the wrong plane to the gate, and the they are now looking for the right one to tow here, so we will be a "little" delayed. Looking for it? How do you exactly misplace an entire plane? Sigh. Long story short, the plane left at 9am instead of the scheduled 7:20am. My sister could have easily gotten my wallet.

The connecting flight from Atlanta was at 11am and boarding started at 10am. We landed at 10:30. The mad rush from the domestic gate we arrived at to an entirely different terminal to catch the connection was actually kind of fun and the most exercise I've had in months. We made it but as we were about to take off Kristine said "Hmmm, I didn't hear the luggage door close after we sat down". Sure enough as we got to Cancun the luggage did not. It seems they found it somewhere in Atlanta and are now sending it here, but it might be a day before we see it, and we did not pack much in our carry-ons. OK, now really, nothing else could go wrong.

I thought, I should make the best of this, so let's capture some of the frustration we're feeling on Video. I look into my carry-on for my camera, and to my total shock and disbelief the camera isn't there. I ask Kristine if she has it but she says No. I distinctly remember taking a couple of pictures at the Toronto Airport and then putting the camera into my carry-on. I start frantically searching for the camera but nothing. However, I find the cord that goes from the charger to the camera, a standard HDMI to USB cable. Curiously though I cannot find the proprietary Sony adapter that this plugs into. The only things missing from my bag are the camera and the proprietary adapter for it.

Normally I would say I probably lost it and it was my first reaction. However, while I may have taken the camera out, I had no reason to take the adapter out, or unplug the cable that was plugged into it. I really think the camera was somehow stolen while the bag was in the overhead compartments on the Toronto to Atlanta flight.

So there you have it. I left my wallet at home, I was 2 hrs delayed because Pearson airport misplaced my plane, my luggage did not make the connection I barely made, and my camera was most likely stolen. All in one day.

On the positive side hopefully I am getting all the bad luck out of the way in one shot!